The Governor’s action marks a critical step towards the construction of a mass-transit link, which is expected to help reduce vehicular congestion and delays for passengers travelling to and from the airport. 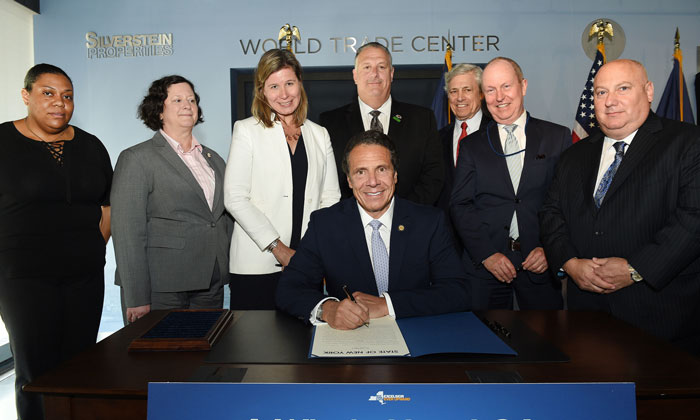 CRITICAL STEP: The Mayor of New York signing the legislation

The new law will allow potential alignments to be considered during an upcoming environmental review of the proposed AirTrain LGA project, which is planned to connect the airport with Long Island Rail Road Station and the 7 subway train at Mets-Willets Point in Flushing, Queens.

AirTrain LGA seeks to establish a reliable, convenient means of travel, with less-than 30-minute trips between the airport and New York Penn Station or Grand Central Terminal. It will also provide rail access from all of Long Island via the LIRR as well as the MTA’s seven subway line.

The legislation signed by the Governor specifically defines a corridor within which the AirTrain LGA project could be constructed and allows, within this corridor, for alternative alignments to be developed and considered as part of an extensive environmental review process, with required public participation.

That corridor was created in consultation with local community members and elected officials. No route can be finalised before the environmental review, which will be led by the FAA, is completed. Under the legislation, the State Department of Transportation would be authorised to acquire parcels of land already owned by the City or the MTA within the established corridor.

“The new LaGuardia Airport will provide an improved customer experience with better access to airlines and public transportation for all passengers – essential to the airport’s transformation,” Governor Cuomo said.

“AirTrain LGA will set an example of comprehensive transit infrastructure for the rest of the nation, and will pay dividends for decades by connecting riders to transit hubs across the Metropolitan area, boosting passenger growth across all airlines, and providing a more efficient means of travel for generations to come.”

Port Authority Executive Director, Rick Cotton added: “For too long, LaGuardia Airport has had the dubious distinction of being the only major East Coast airport without a rail link, and that is unacceptable.

“Simply put, a 21st century airport must meet global standards, and that requires rail mass transit access. The AirTrain will complement the ongoing $8 billion redevelopment of LGA into a world-class airport worthy of New York.”

Construction is anticipated to start in 2020 and conclude in 2022.

The Port Authority has already conducted numerous meetings with local elected officials, community groups and other key stakeholders to elicit comments regarding potential AirTrain routes ahead of the formal environmental review process.

The Port Authority of New York and New Jersey, which operates LaGuardia Airport, is working with the Metropolitan Transportation Authority to build a new station complex at Mets-Willets Point, with easy transfer options between the LIRR or 7-line and the new AirTrain, which will run approximately every four minutes.