The Dublin Airport Authority in partnership with ESB has installed 268 solar panels on top of the airport’s reservoir system which will provide more than half of the reservoir’s annual energy requirements. 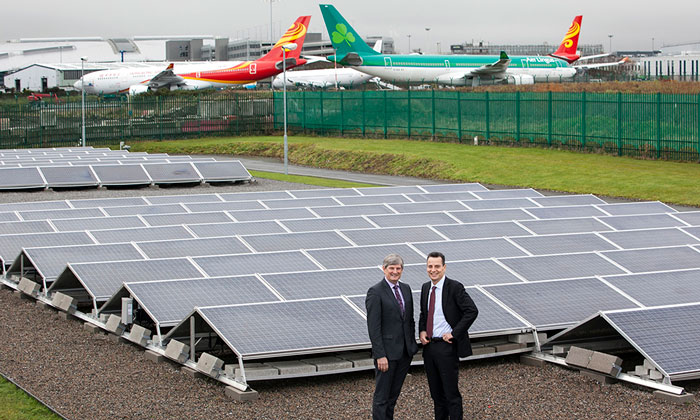 The solar panels are connected directly to the airport’s reservoir system which provides 500 million litres of water – the equivalent of 200 Olympic sized swimming pools – to both passenger terminals, as well as servicing all the offices and businesses on the airport campus.

The solar farm is part of an energy agreement between DAA and ESB to achieve an overall target of 33 per cent reduction energy consumption at the airport by 2020.

DAA Chief Executive Dalton Philips said the company was working closely with ESB to identify opportunities to use low carbon technologies to improve energy performance at the airport.

“We want to be leaders in this area and help Ireland meet its national obligations in the process.”

“Over the past three years Dublin Airport succeeded in reducing its carbon footprint by 5,000 tonnes, which is equivalent to a 10 per cent reduction in carbon emissions under its control,” according to Mr Philips.

“We are looking forward to building on this performance and making even more energy savings that will also benefit the travelling public through sustainable environmental performance and annual cost savings.”

The consultancy provides capital funding, energy management services and implementation of energy projects for businesses which are large users of energy.

ESB Chief Executive Pat O’Doherty said: “We have a strong and long-standing relationship with daa and we are delighted to partner with them on their low carbon transition, delivering significant reductions in energy consumption throughout the airport campus.

“Over the last two years, ESB’s Smart Energy Services has gained considerable interest from companies such as DAA with high energy demand and is set to deliver €150 million in savings on energy costs for over 300 large businesses in Ireland and the UK by 2020.

“This fits entirely with ESB’s wider purpose of creating a brighter future for the customers and communities we serve, delivering on our reputation as a responsible, committed and trusted leader.”

Dublin Airport supports and facilitates more than 119,200 jobs in the Republic of Ireland and contributes in the region of €8.3 billion to the Irish economy