Robot cop goes on the beat at Hamad International Airport

A security robot that its creators claim reads the pulse rates of passers by as well as scanning them for forbidden objects has just rolled out at Hamad International Airport. 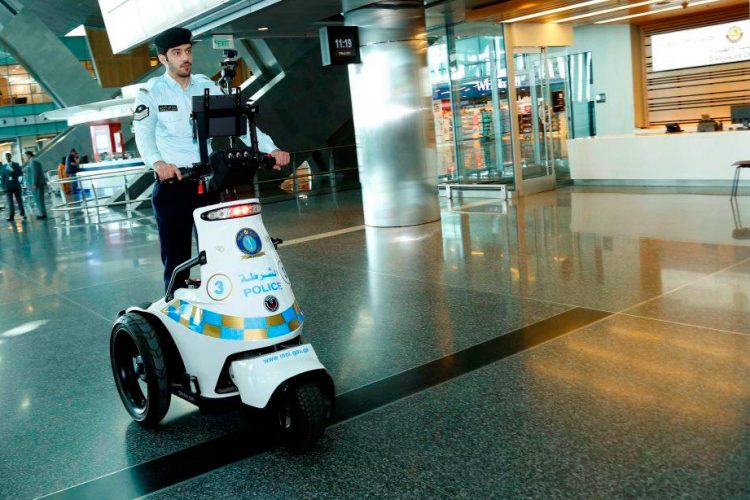 TO PROTECT AND SERVE: Scanners fitted around the body of the scooter provide a range of information

It doesn’t quite have the stoic sheen of Robocop, mounted on a scooter as it is, but Hamad International Airport’s newest asset is none the less a powerful tool in its security arsenal.

The Airport Security Department at the Ministry of Interior in cooperation with Lakhwiya Force launched the security robot earlier this week.

Built in the form of a scooter,  the robot can measure pulse rate remotely and has facial recognition feature inbuilt. It also has cameras and sensors to detect suspicious and wanted persons, fake currencies, credit cards, abandoned objects and explosive.

The robot feeds video back to a screen in the security operating room and highlights prohibited items in different colours.

Major Engineer Ali Rashid, head of the security technology at Lakhwiya said: “The three-wheel scooter robot is small in size allowing for free mobility across different parts of airport. It has various devices fitted on it that allows it to operate on its own.”

He added that a camera stand attached near the side wheel scans every passenger, displaying their face, heartbeat, and identity to the official on a screen fitted near its handle. It also includes telemetry to detect stress.

Apart from that there is a small sensor near its foot stand that scans for any abandoned luggage and alerts the official, as well as both a money scanner and finger print machine in case the official requires them.

He pointed out that the device would alert officers to a suspicious person by measuring the heart rate. If it exceeds the normal limit, the device gives a signal to the security officer who stops the person and searches him through the devices carried by the security robot.