Among those in the running is The Boring Company, whose owner Elon Musk announced his firm’s intent in a late-night tweet in November. 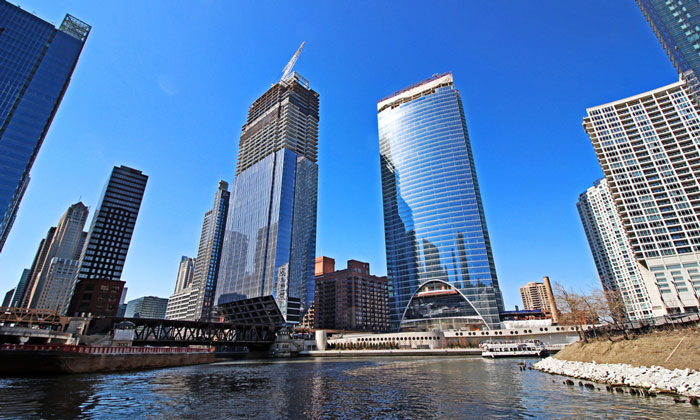 DOWNTOWN CHICAGO: O'Hare was the busiest airport in the world until 1997

The Mayor of Chicago has described the four entrants in a bid to build an express train to Chicago O’Hare Airport as ‘visionary groups’.

Mr Rahm Emanuel announced last week the Chicago Infrastructure Trust (CIT) had received four responses to a request for qualifications to design, finance, operate and maintain the proposed O’Hare Express. It is hoped that the service would ferry passenger from downtown Chicago to the international airport in 20 minutes or less, halving the current journey time.

Currently,  there are two rail routes to and from the airport: the Chicago L and Metra.

Mr Emanuel said: “Four visionary groups have stepped forward because they see what we see – a connected Chicago is a stronger Chicago.

“Strengthening connections between the economic engines of downtown Chicago and O’Hare airport will build on Chicago’s legacy of innovation and pay dividends for generations to come.”

The CIT, on behalf of the City of Chicago, received responses from:

The CIT and the City will now begin to evaluate the statements of qualifications. Upon conclusion of that review qualified respondents will be permitted to continue in the process. The next planned step is issuance of an RFP to qualified bidders.

“The CIT’s purpose as a specialised resource to the City focused on infrastructure financing and development involvement makes it the perfect choice to lead this transformative and historic
project,” Chicago Treasurer and CIT Chair Kurt Summers said. “We look forward to reviewing the submissions and continuing to move this important project forward.”

The RFQ specifies that the O’Hare Express Service should include a downtown station, an ORD station and one maintenance facility. Corridors may be above or below surface level. Goals of the project include travel times of 20 minutes or less with a reliable service frequency of at least every 15 minutes for the majority of the day with reasonable premium service fares less than the cost of current taxi and ride-share services.

Any proposal must also address how potential conflicts or impacts on existing transportation systems and the environment would be avoided or minimised. Although cost estimates for the project are not yet known, the RFQ stipulates that the O’Hare Express Service will be funded solely by project-specific revenues (like fares or advertising) and financed entirely by the concessionaire. At this point in the competitive process additional information about the bids will not be released.

The current total daily number or air passengers travelling between ORD and the Chicago Central Business District is approximately 20,000 and is forecast to grow to at least 35,000 daily air passengers in 2045.