A unique project that will boost the skills and economy of Essex took a major step forward today after London Stansted Airport and Harlow College received planning permission from Uttlesford District Council for a new £11 million technical skills college at the airport. 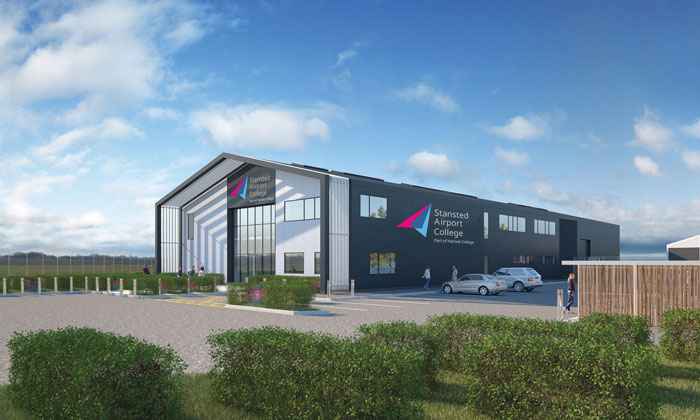 The two-storey facility – the first of its kind at a major UK airport – will be located on a one acre site on land made available by the airport near the long-stay car park and Novotel Hotel. The project has received two separate £3.5 million grants from the South East Local Enterprise Partnership (SELEP) Local Growth Fund and Essex County Council.

Courses offered at the facility will be designed to bridge the skills gap in STEM (Science, Technology, Engineering and Maths) subjects as well as specific airport areas such as aircraft and airport engineering, business studies, logistics and supply chain management, asset management, hospitality and customer service.

The college is seen by Stansted Airport as a critical project as it plans its growth. The airport has recently announced its intention to apply to increase the number of passengers it is permitted to serve every year to 44 million. To grow in the next decade it will need skilled on-site workers, with the type of qualifications offered by Harlow College. The airport hopes that by partnering with Harlow College, it will be able to not only build up the skill base needed for its continued successful growth, but also benefit Uttlesford district and the wider region by offering more career and training opportunities to local people.

More than 500 people are expected to train at the college each year in technical skills, traineeships and apprenticeships. Work is expected to start on the site later this year and will be ready to open in time for the 2018 autumn term.

“This is excellent news for everyone connected to Stansted Airport and Harlow College. Securing, developing and retaining the right talent and skills at a growing airport like Stansted is critical to our business, our 200+ on-site business partners and the long term prosperity of the region.

“Over the last few years we have worked in close partnership with the SELEP, Harlow College and Essex and Uttlesford councils to develop and deliver an on-site further education facility in the area which will help to address the growing skills gap in engineering and customer service and develop a pipeline of employees fit for  growth at the airport over the next decade.  A project like this will provide more opportunities for local people to acquire the skills they need to join us as we play an ever more critical role in providing runway capacity in the South East of England”

“We are delighted by the announcement that planning permission has been granted in relation to our plans to place a Technical Skills College at Stansted Airport. This is a significant milestone as it enables us to move to the next phase of realising this important facility for the airport, the local community and the wider region.

“Our partnership with Stansted Airport, along with the support received from both the South East Local Enterprise Partnership and Essex County Council, has been instrumental in enabling us to get to this stage and with a strong team in place we are confident that Stansted Airport College will open for its first intake of students in September 2018.”

“This is one of the most ambitious and truly exciting projects that is taking place in Essex. I am delighted that we have worked so closely with London Stansted Airport, Harlow College and SELEP to deliver this critically important centre. It means that young people in the area will now be able to learn new skills in aviation which given the importance of the airport is vital. The technical college is a beacon of hope and education in West Essex that will set a standard and example to the rest of the UK.”

“Delivering the skills needed by business to sustain a world class economy, and one able to forge trading relations around the globe, is a top priority for SELEP. It is vital to our area’s future that we offer STEM-based and airport-related training opportunities to our young people. It is fantastic to see this leading-edge project progress.”