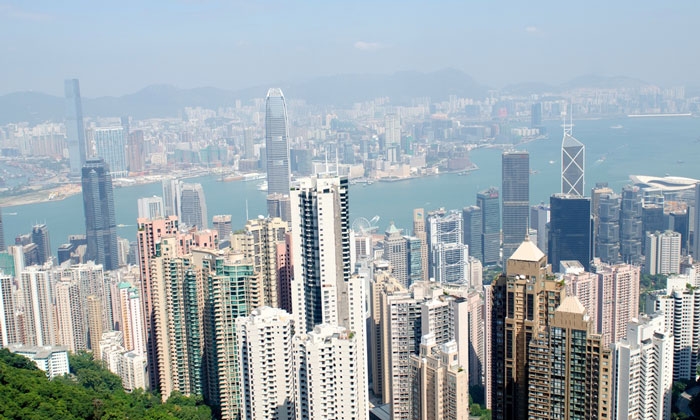 Following surging growth rates of Chinese departures to Thailand in the 12 months to July 2015 – well above the level of international traffic growth to Thailand, data from CiR indicates that there has been a steady decline in demand to March 2017 (see chart below). 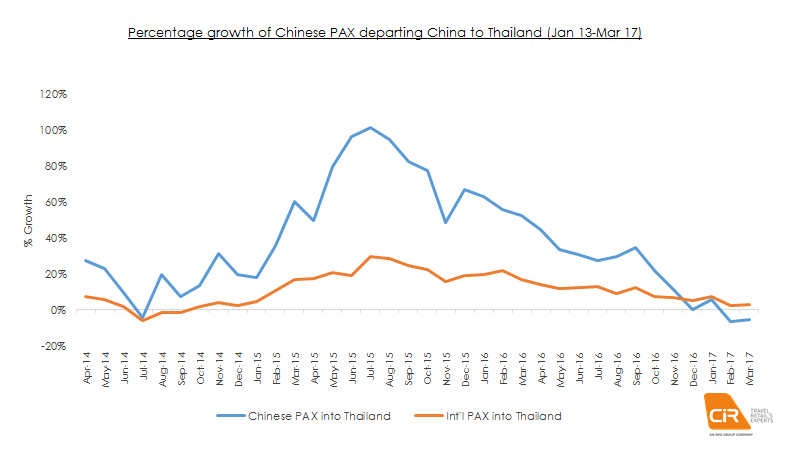 Metrics from CiR’s traffic modelling and forecasting tool, Business Lounge, show that from peak growth of +101% in July 2015 (compared to July 2014 year-on-year) rates have been falling steadily ever since.

By December 2016 there was zero growth and in the first quarter of 2017 the trend was negative overall at -2%.  “What this data from CiR Business Lounge tells us is that after a golden period of Chinese travel easily outstripping general international demand to Thailand, the situation has reversed – and since December 2016 international traffic to the country has been stronger,” says Garry Stasiulevicuis, President of Counter Intelligence Retail.

The Chinese boom in the 12 months after August 2014 came in the relative calm after the storm of a series of anti-government protests that lasted until May 2014 during which time incumbent Prime Minister Yingluck Shinawatra was unseated.

As political stability returned, so did international traffic – from the Chinese in particular. In 2015, Chinese tourism was up by +66% (from a low base in 2014), while 2016 saw a more measured rise in Chinese PAX at +32% YoY. Nevertheless, this represents 1.3m extra Chinese arrivals to the country – a boon for duty free and travel retailers. The Chinese market is the largest source of tourists in Thailand.

While Chinese growth rates have been falling since July 2015, they were well ahead of international levels. However, a September 2016 ban on so called ‘zero-dollar’ tours (cheap group packages where tourists are herded to specific hotels and shops and unable to do much independently) Chinese numbers to Thailand have dropped dramatically.

The death of Thailand’s King Bhumibol Adulyadej a month later and official year-long mourning has also meant the cancellation of a number events and ‘full moon’ parties which affected the tourism sector.

The ‘zero-dollar’ tours ban is a joint campaign with the Chinese authorities and it has resulted in the impounding of more than 2,000 tour buses. Backed by Tourism Authority of Thailand, the initiative is designed to improve tourism quality levels so that Chinese travellers have a better experience once the market purge is completed. TAT expects this will eventually result in renewed and sustainable growth from its largest source market.

Forecast data from Business Lounge offer some hope to travel retailers in Thailand. Based on scheduled capacities from China, the data indicates that while seat numbers have stayed below 2016 up to May, from this month (June) the trend is set to improve.

“Summer seat capacities look promising in that they will be substantially above 2016 numbers until August. The gap then narrows again but broadens out from October. This is good news for both travel retailers and the wider tourism sector in Thailand which is trying to attract more Chinese FITs (independent travellers) to its shores.”

Helping FITs to Thailand will be low-cost carriers. As previously mentioned by CiR, growth in China’s LCC sector has been buoyant in recent years and this continues to be the case for traffic into Thailand. In July for example, carriers such as Spring Airlines, Juneyao Airlines & Sabaidee Airways have increased available capacity by about +43%.