Brisbane Airport (BNE) is continuing its commitment to sustainability and the environment, being the first Australian airport to roll out a fleet of 11 electric buses. 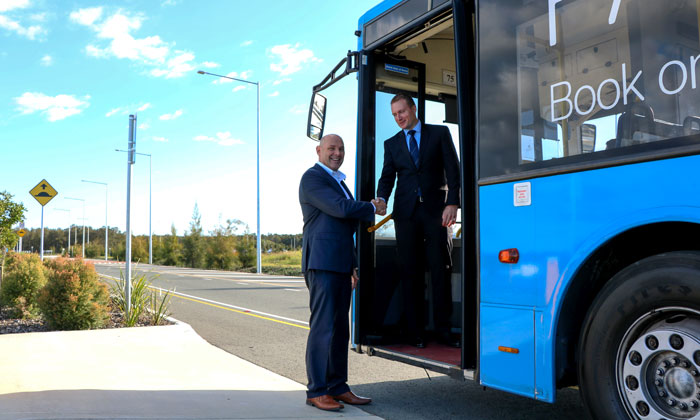 Carbridge, an Australian-headquartered world leader in aviation passenger ground transport, has been awarded the more than $5 million per year contract to exclusively build, operate and maintain all aspects of the Brisbane Airport bus fleet following a competitive tender process.

The five year contract will commence on 1 July 2017 with the new electric bus fleet coming into full operation in February 2018.

Martin Ryan, Head of Parking and Transport Services at Brisbane Airport, said, “The roll out of electric buses for our landside transport needs reinforces BAC’s ongoing commitment to a cleaner, greener environment and improved passenger experience.

“The new fleet will be super quiet and environmentally clean, having reduced noise pollution and zero tail pipe emissions.

“In fact, swapping out our current fleet for electric buses will result in a reduction of 250 tonnes of carbon emissions each year, equivalent to taking 100 cars off the road,” Mr Ryan said.

Passenger comfort and functionality have not been forgotten with tailored interiors designed specifically for travellers, including plenty of luggage racks, plus three full size double doors making boarding and disembarking more efficient.

“Technology and innovation is also interwoven into the vehicles, with GPS next stop announcements, driver monitoring and real time tracking data, meaning issues can be immediately identified and responded to in real time,” Mr Ryan added.

Luke Todd, Carbridge CEO, said, “Carbridge is proud to partner with Brisbane Airport to deliver world leading bussing technology for the airport and its patrons.

“The Toro electric buses created by Carbridge are powered by BYD battery technology and are built with an aerospace lightweight aluminium bus body.

“The Carbridge Toro is statistically the world’s best electric bus with a driving range of 600 kilometres on a single charge. The buses use kinetic power regeneration technology to produce charge as the buses decelerate. This advanced technology further reduces battery recharging frequency as power generation is created by the buses whilst in motion.

“Carbridge is delighted to build further upon our long-term relationship with Brisbane Airport which commenced in 2008,” Mr Todd said.

The roll out of Electric Buses is for landside transport operations only at this time.