According to officials, 36 people have been killed and approximately 150 injured in a gun and bomb attack at Istanbul Ataturk Airport in Turkey. 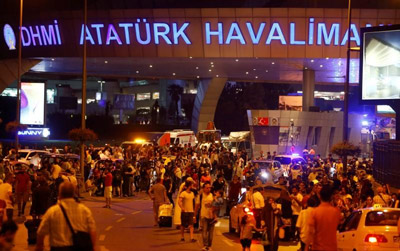 According to officials, 41 people have been killed and approximately 150 injured in a gun and bomb attack at Istanbul Ataturk Airport in Turkey. On the evening of Tuesday 28 June, three attackers began shooting outside Istanbul Ataturk Airport -Europe’s third-busiest airport – and then blew themselves up outside security checkpoint after police started firing at them.

According to The Guardian newspaper, shortly before the blasts, assailants armed with AK-47 rifles became involved in a firefight with security and police near the airport’s x-ray security checkpoint at 9:50pm local time (1850 GMT). Other reports suggest one of the attackers opened fire in the departures hall before all three blew themselves up in or around the arrivals hall a floor below. In total 41 people are confirmed dead and approximately 150 injured.

“There is initial evidence that each of the three suicide bombers blew themselves up after opening fire,” he told reporters at the airport.

The Prime Minister went on to say the attackers had come to the airport by taxi and that preliminary findings pointed to the Islamic State terror group. However, to date, no group has claimed responsibility.

According to BBC News There are X-ray scanners at the entrance to the terminal but security checks for cars are limited.

President Recep Tayyip Erdoğan called on all governments, especially in the west, to join forces in taking a “firm stand against terror”.

“The bombs that exploded in Istanbul today could have gone off at any airport in any city around the world. Make no mistake: for terrorist organisations there is no difference between Istanbul and London, Ankara and Berlin, Izmir and Chicago or Antalya and Rome.

“Unless all government and the entire mankind join forces in the fight against terrorism, much worse things than what we fear to imagine today will come true.”

Flights to and from the airport were initially suspended after the attack. However, flights have now resumed but many are delayed or cancelled.

Olivier Jankovec, Director General ACI EUROPE commented, “Security is paramount and we the airport industry remain firmly committed to continuously improving the quality and efficiency of security measures. Airports are already among the most regulated spaces in this regard. What happened yesterday in Istanbul shows us that the real challenge now is to stop terrorists before they ever reach an airport or any other public space – I cannot reiterate enough, better intelligence and more effective information exchange & cooperation between the competent public authorities needs to become the highest priority.”