China continues to invest in the Smart Airport

A study commissioned by SITA has revealed China’s airports and airlines are continuing to invest in the Smart Airport concept despite recent economic challenges. 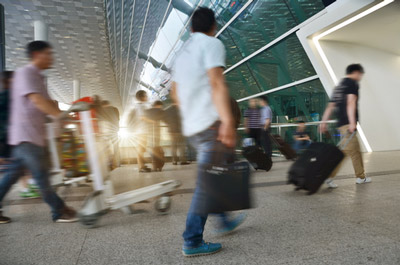 A study commissioned by SITA has revealed China’s airports and airlines are continuing to invest in the Smart Airport concept despite recent economic challenges. Analysis published today shows China’s airports and airlines are responding with higher levels of investment in innovation than found globally, in order to create ‘smart airports’.

Chinese airports spend 32 percent of their IT budget on innovation

According to figures from SITA, nearly three quarters of airports in mainland China (72 percent) are investing in new technology compared to 58 percent globally. While airlines in China are spending 38 percent of their IT budget on innovation compared to a global average of 32 percent.

China has the world’s fastest-growing domestic flight market with passenger figures expected to rise sharply to 1.3 billion in 2034, a total of 856 million more than in 2014. This growth will put added pressure on existing airport infrastructure. However, 93 percent of passengers have smartphones and are keen to use them and other personal technology for their journey. SITA believes this presents opportunities to airlines and airports to offer services in a different way including “off-airport” check-in.

Figures suggest only 28 percent of passengers indicated a preference to use an airport counter for check-in. More than half of passengers (59 percent) said they would prefer to use their own technology to check-in for their next flight. In addition, 67 percent want to use their smartphones for identification purposes and access, including boarding the aircraft and entering airport lounges.

The willingness of passengers to use self-service gives the industry the opportunity to rethink the airport layout and how it manages passengers.

“Change is coming, one area we see this happening is of the development of Smart Airports”

Commenting on the report, May Zhou, SITA Vice President and General Manager, China, said: “Change does not happen overnight, it is going to take time for the industry to deploy the infrastructure and services in a way that enables mass adoption by passengers. But change is coming, one area we see this happening is of the development of “Smart Airports” where new technology such as sensors, beacons and business intelligence are used to deliver efficiencies. Investments are now being made. Over the next couple of years, 85% of airports are planning projects in sensor technologies while 82% plan to have business intelligence initiatives for passenger flow in place.”

72 percent of passengers would like to receive baggage tracking notifications

The report also highlights passenger demand for keeping track of baggage. Passengers now want to know where and how long before they can pick up their bag when they arrive – 72% want more details, such as carousel and wait time, for bag collection. The industry is responding: currently, only a few airlines and airports provide this information, but in the next few years 86% of airlines will provide baggage tracking notifications and 57% baggage collection information to passengers.