A consortium comprising of Fraport AG and Greek partner Copelouzos Group has signed a contract with the Hellenic Republic Asset Development Fund to operate 14 regional airports in Greece. Operation at the 14 regional airports in Greece will be transferred to the Fraport AG Frankfurt Airport Services Worldwide and Copelouzos Group consortium in autumn 2016, […] 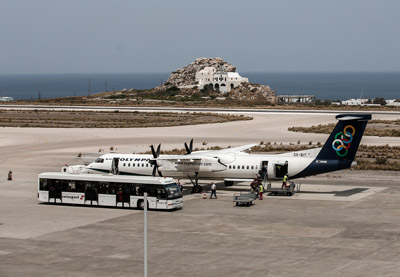 A consortium comprising of Fraport AG and Greek partner Copelouzos Group has signed a contract with the Hellenic Republic Asset Development Fund to operate 14 regional airports in Greece. Operation at the 14 regional airports in Greece will be transferred to the Fraport AG Frankfurt Airport Services Worldwide and Copelouzos Group consortium in autumn 2016, following the signing of a €1.234 billion contract with the Hellenic Republic Asset Development Fund (HRADF). The 40-year concession allows the consortium to operate, manage, develop and maintain the designated regional airports in an attempt to strengthen and expand the Greek Tourism Industry.

Fraport will hold the majority share in the concession companies while Copelouzos will hold the remaining stake.  Actual ownership of the airports will still be retained by the Greek government. Along with the upfront concession payment of €1.234 billion, an annual fixed concession fee of initially €22.9 million will be paid.  In addition, the Fraport-Copelouzos consortium is required to invest a total of €330 million in airport infrastructure until 2020, followed by maintenance and traffic-driven capacity investments during subsequent years of the project.

Commenting on the announcement, Fraport AG’s executive board Chairman Dr. Stefan Schulte said:  “Since being selected as preferred bidder more than a year ago, Fraport and Copelouzos have remained steadfastly committed to the Greek regional airports – a win-win project for Greece and its people.  The project underscores the extensive know-how that Fraport will be able to provide at these 14 aviation gateways, which are vital for Greece’s economy and, in particular, its huge international tourism sector.  We are proud that the Greek government and the Hellenic Republic Asset Development Fund (HRADF) have entrusted Fraport-Copelouzos with the task of strengthening the competitive position of these airports in the decades to come. We would like to thank both the HRADF and Greek government for their professional cooperation in reaching this milestone agreement.” The founder and chairman of Copelouzos Group, Dimitris Copelouzos, added: “The project for the 14 Greek regional airports is one of the largest and most beneficial investments based on national and social criteria. Undoubtedly, this investment is a basis for boosting the Greek economy, especially during this critical period for the country. The benefits at the national and regional level are multiple and the cooperation of the two companies is a guarantee for successfully supporting tourism as the heavy industry of Greece, reinforcing   competitiveness of the economy and creating new jobs.”