This agreement will allow the AAK to “enhance competence and qualification of its staff, as well as to transfer the best experience from aviation authorities to Kazakhstan.” 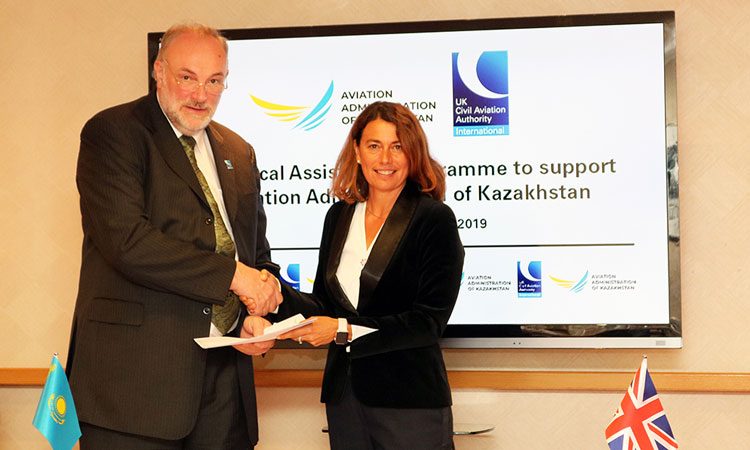 CAA International (CAAi), the technical cooperation arm of the UK Civil Aviation Authority (UK CAA), has been awarded a new consultancy project to help the Kazakhstan aviation regulator (AAK) adopt a new aviation oversight model, based on that used in the UK.

Over the next 12 months, regulatory experts from the UK CAA will assist the AAK to review Kazakhstan’s primary legalisation and propose ways to further incorporate EASA/EU provisions and alignments with the UK CAA model. A second workstream will focus on the organisational design of AAK and provide recommendations in accordance with the UK CAA model. CAAi has also been tasked with conducting a training needs analysis of AAK’s technical staff. The outcome of this analysis will influence AAK’s inspectorate training plan.

The project falls under Kazakhstan’s 100 Concrete Steps national development initiative announced in 2015, calling for widespread economic, social and political reform. Step 68 specified improving the government’s air transport management system “to increase the attractiveness of air transport through Kazakhstan”. Part of this initiative was the creation of the Aviation Administration of Kazakhstan (AAK) that was established in August 2019.

“Kazakhstan is located between two huge aviation markets so there is great potential for attracting more in transit connections, as well as expanding its international network,” commented Mattijs Smith, Head of International Development at CAAi. “The upgrade of Kazakhstan’s regulatory framework will build the solid foundation needed for overseeing this, allowing Kazakhstan to generate more of the socioeconomic benefits aviation brings.”

Peter Griffiths, Director General of Aviation Administration of Kazakhstan, added: “Establishment of AAK will expedite the transition of Kazakhstan to the international best practice in the field of civil aviation.”

Phase one of the project is expected to commence in October 2019. The second phase that involves the development of a five-year strategic and economic sustainability plan is expected to follow.