A central pick-up area has been launched at LAX to reduce traffic and will offer amenities such as toilets and food trucks for passengers. 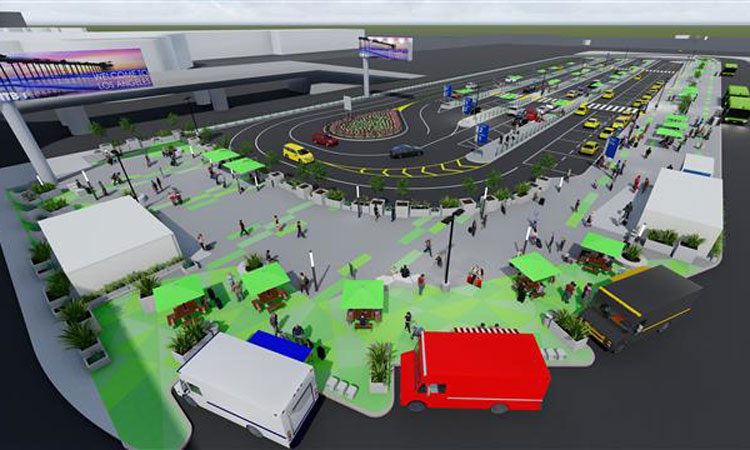 This rendering of the new 'LAX-it' pick-up area shows the bus drop off location to the right, dedicated lanes for taxis and ride app vehicles and food trucks (credit: LAWA).

Los Angeles International Airport (LAX) has announced its plan to introduce ‘LAX-it’, a centralised area for passengers to pick up a taxi or ride app service and avoid traffic in the Central Terminal Area (CTA).

LAX-it will only be for pick-ups, as ride app and taxi drivers will continue to drop off passengers at the terminal kerbs on the upper/departures level.

“Anyone who has come to LAX knows that traffic in the Central Terminal Area can get rough and we have heard from our guests that the current system with ride pick-ups can be frustrating,” said Keith Wilschetz, Deputy Executive Director for Operations and Emergency Management, Los Angeles World Airports (LAWA). “LAX-it will provide an easy, efficient experience for guests using taxis and ride apps and reduce overall traffic in and around the central terminal area for all those driving to and from LAX and our neighbours.”

LAX-it will be situated a short walk from many terminals or via a dedicated shuttle from the airport’s terminals. LAWA has said the service will reimagine the pick-up process for taxis, Uber, Lyft and Opoli with additional amenities such as restrooms, benches, umbrellas for sun and rain protection and local food trucks. It will also offer connectivity, with mobile phone charging stations and Wi-Fi.

The shuttles will operate in a dedicated lane on the lower/arrivals level where they will not compete with other airport traffic and will take guests from any terminal to the new pick-up area.

Switching to a central pick-up point is expected to remove about 15 per cent of all vehicle traffic from the CTA. Without this change, the traffic in the CTA would continue to become more congested, with increasing impacts on neighbouring communities as a result of traffic backing up on surrounding access roads, LAWA has said.

LAX-it will open at the end of October 2019 and will remain in service until one of the airport’s major projects, Automated People Mover, opens in 2023.