Winter operations: Warsaw Chopin Airport does not fear the winter

Ten super-modern Øveraasen snow removal kits, dozens of auxiliary machinery and a regiment of 100 experienced people, seasoned in the toughest weather – Warsaw Chopin Airport can confidently state that it fears neither snow nor frost. And as colleagues from the Polish airport explain, this season they will prove once again that the airport is one of the best prepared for winter conditions of all the airports in Europe. 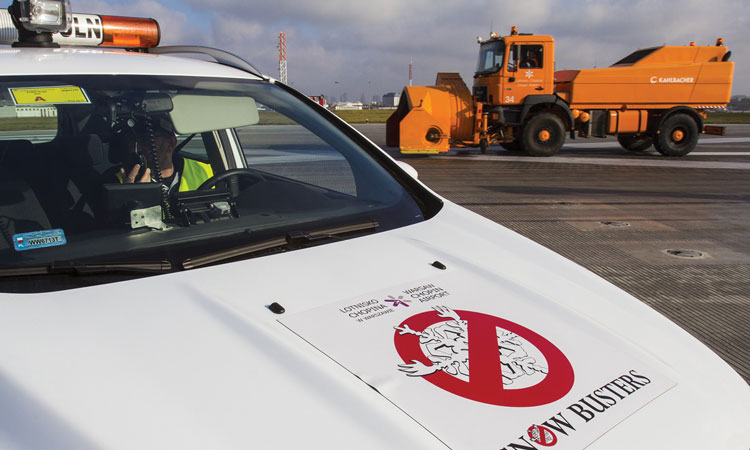 Warsaw Chopin Airport has almost 700 hectares and over 15km of surface runways and taxiways, with 100 hectare surface of parking aprons for nearly 100 aircraft. Keeping the airport of this size in a continuous performance state during winter is a challenge for airport services staff.

“The most important are of course the runways, because airplanes move there at high speeds,” says Wojciech Łobodda, Deputy Head of the Paving and Machinery Maintenance Unit of Warsaw Chopin Airport. “Pilots must be sure that the surface is in a perfect condition, otherwise they would not land and passengers would have trouble reaching their destinations. Sometimes during heavy snowfall, the runway is available for just half an hour. Then the snowploughs enter the scene, and the airplanes are put on hold and wait for the signal to land. We repeat the procedure till the end of the precipitation.”

It’s not the same as on the road

To fight the snow, the airport has powerful Øveraasen sets. They consist of a Mercedes tractor with a head-mounted folding plough with a 6.8m working width. The towing tractor is also equipped with a brush cleaner with a 5.5m working width and a strong fan which dries the surface and blows away the remains of loose snow.

As Wojciech Łobodda says: “This set is very different from an ordinary plough that works on the roads. First of all, it is much larger. Road ploughs usually have a working width of 3m and our airport ones are twice wider. But their task is essentially the same.”

The new sets are also much more efficient than the machines the airport used in the previous winter seasons. In the past it took two runs of eight machines to clear the runway across the entire width. Today, it takes just one run. Removing snow from the runway of over 3.6km takes 15-20 minutes at the most. In many other airports, snowploughs occupy a runway up to two times longer.

At Warsaw Chopin Airport there are teams of drivers on duty around the clock, ready at any moment to jump into the cars and move into action.

“Our standard is to start the equipment and leave the base after it begins to snow. Winter does not surprise us – we respond almost immediately,” says Marek Walczak, Head of the Paving and Machinery Maintenance Unit. “Every minute, during which the planes cannot land or take off, is a measurable loss for the airport.”

Marek stresses that Warsaw Chopin Airport is never actually closed for traffic due to bad weather conditions: “I recall the last such case was in 2013. During a very harsh winter the flight operations were halted twice for a period of one hour. At the same time, the main European airports were closed for several days. We can usually handle the situation, even if it snows very hard.”

Winter does not scare us

To maintain the surface in a good condition, several pieces of auxiliary machinery are also used. Among them, worth mentioning is a special mobile sprinkler, used for sprinkling chemicals on runways and taxiways.

“Arms with nozzles, which administer the chemicals, extend to a width of 36m. This makes it possible to spray the entire technical width of the runway in one pass,” explains Marek.

The chemicals applied at the airport are harmless to the metal parts of the landing gear or the environment; and that’s because Warsaw Chopin Airport strives to excel in ecology and uses liquid and granule chemicals on the basis of formate instead of urea for the de-icing of the surface.

Marek continues: “The chemical is several times more expensive, but we can honestly say that it can be totally disposed of not harming the environment.”

The airport has also managed to solve the problem of the harmful glycol used for de-icing the aircraft wings before take-off.

“The spaces where the de-icing is carried out are equipped with special installations that catch any liquid glycol,” explains Witold Piechota, Head of Environmental Protection Unit. “Such contaminated fluid is then transferred to an external company for utilisation.”

Ready for a signal

Warsaw Chopin Airport has a modern ‘Ice Alert’ system made by Boschung, which allows early prediction of icing and applying preventive measures on surfaces of the runways and taxiways in advance.

The system consists of six measuring stations located at each of the airport runways. Each one is equipped with a unique and patented active sensor of surface condition (BOSO and ARCTIS) and electronic analysers of the collected data. Thanks to the automatic computer analysis of collected parameters, including air and surface temperature, surface moisture, relative humidity and the amount of precipitation, it is possible to accurately forecast current freezing temperatures at which black ice may appear on the runways.

It is worth mentioning that a separate system, complementing the Ice Alert, is installed on a part of overpass accessing the Terminal A from the city. Meteorological stations were supplemented by automatic road sprinklers which distribute special agent that prevents freezing on the surface of the road. This way, all the roads in front of the departures hall of Terminal A are always black and free of ice.

Of course, the ice and snow at airports are very undesirable. Their presence may endanger the safety of flight operations and disrupt the flow of traffic. Therefore, all the runways and taxiways at Warsaw Chopin Airport must always be clean and black, so that aircraft can safely take-off and land.

Interestingly enough, the majority of de-icing agents are consumed not when there’s a -20°C frost outside. The air then is usually dry and it’s not raining nor snowing, so the road surfaces – once cleaned, are black and dry. Much more challenging is the phenomenon of ‘crossing zero’, which happens when the temperature from positive figures drops quickly to approximately 2°C below zero, and then returns to the ‘plus side’. In extreme cases, it may happen several times a day. The changes in temperature are frequently accompanied by heavy snowfall or freezing rain. In such conditions, only the most experienced people know what method of securing the runways will be the most effective.

“Sometimes the best are liquid chemicals, sometimes granulated, sometimes it is not worth to apply anything,” explains Wojciech. “This cannot be found in books; you read it from the air, the force of the wind, the movement of mercury in the thermometer. You have to survive a few, maybe a dozen winters at the airport to know.”

Knowledge and experience come in very handy, because if the de-icing agents are applied wrong, the whole airport could become paralysed and also the cost of its maintenance could significantly increase. Each year the airport consumes on average about 1.5 thousand tonnes of chemicals to de-ice roads, but during a severe winter the amount may increase twofold. The use of each tonne of such agents should be well thought out and justified.

Fortunately, the employees of Warsaw Chopin Airport’s Airport Maintenance Unit are among the most experienced professionals in their trade in Europe. They gain their experience each year, because the climate of Warsaw is harsh.

During the 2014/15 winter season there were 25 days of snowfall, and during 63 days the temperature was around 0°C. The frequency of ‘zero crossings’ was higher by approximately 10% than the average for the past 15 winters. Nevertheless, Marek believes that the previous winter was one of the mildest in recent years. “The total cost of airport maintenance during this period amounted to 5.8 million PLN. Winter 2012/13 was much harder when we spent a record of 16.3 million PLN. During that winter the snowfall lasted 60 days – from 27 October to 5 April. Despite extreme conditions, our airport hasn’t stopped working, not even for a moment.”The current winter season has not been very harsh so far. But even if this is subject to change, Warsaw Chopin Airport is of course prepared.

Before the start of the 2015/2016 winter season, Warsaw Chopin Airport’s new garage-warehouse complex with an area of over 2,000m2 was put into service. The garage is a place to house chemical protection equipment plus there are two workshop stations where inspections and repairs can be carried out. In a building next door, a warehouse for depositing chemical agents has also been created. The building can store 500 tonnes of granules and 500 tonnes of de-icing liquid. The warehouse is equipped with an automatic filling system of mobile spreaders and sprinklers, which significantly speeds up the work of the maintenance team.