Despite some initial setbacks for delivery, the Boeing 747-8 freighter orders are being completed and flights have begun. The new aircraft is a clear demonstration of today’s demands and needs of cargo carriers to cut costs and maximise efficiencies. The larger, more fuel efficient Dash 8 presents several new advantages and solutions to meet those needs of cargo airlines. Cargolux, the first carrier to receive and utilise the Dash 8 said it expects the new aircraft will deliver profitable growth for their business. 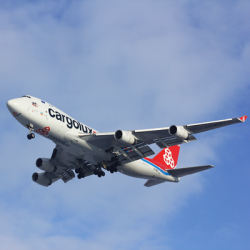 While the Dash 8 offers significant benefits to carriers, its operational requirements can also present some logistical challenges to airports. In the United States, there are only a handful of airports that are authorised to handle the aircraft.

This is an ideal time and opportunity for alternative airports to grow their cargo traffic by highlighting and promoting benefits and incentives that save carriers even more money and time as a result of less congested airspace and runway traffic congestion, as well as the ability to offer cheaper fees and fewer delays. For example, at Chicago Rockford International Airport (RFD), we promote these benefits amongst other advantages such as no parking fees for aircraft and ‘direct in’ approaches. After receiving the Modification of Standards from the FAA for the Dash 8, RFD used this as additional leverage to market the airport’s cargo services.

Airports believe they are the airline’s solution to their cargo problems. In reality, this is not often the case with geographical location being one of the primary reasons. If an airport is located outside the mainstream logistics network that feeds the airports then they have a problem. It doesn’t matter what incentives are offered, as any benefit would be overshadowed by the added cost and time for transporting the freight if it is a long distance from an international cargo gateway.

Most major airports around the world are there to serve the passenger airlines. United, American and Delta may have as many as 300 flights per day to or from a major hub or gateway. This is considerable revenue for the airport when you factor in all the fees that it receives from these flights. In the case of major cargo carriers or passenger carriers with freighters, it is more likely that there will be only four to nine flights a week. It is also likely that freighter traffic takes up a very small proportion of total operations to and from the major hubs.

The fact that freighters are flying at night can also be a problem for airports located in areas of high-density populations. In the case of alternative airports, they are often outside the major population centers. Some of these airports are ex-military bases that have been turned back to the local community. These airports are generally not concerned with curfews and this explains in part why these airports are seeking cargo. Often they are not going to attract passenger traffic simply because of their location, leaving cargo as a realistic source of revenue and growth for those airports.

It is quite a different proposition when trying to attract cargo carriers rather than passenger carriers. Most alternative airports start off by trying to attract passenger traffic. Any airport seeking to attract cargo carriers need to employ a cargo expert as it is essential that the airport ‘speaks the language’ of the market. The requirements of the air freight forwarder must be fully understood and resolved to encourage them to a strong positive influencers on the cargo carrier. This is not a short-term sale. It requires the development of relationships with airlines at local, regional and headquarters levels, as well as relationships with the major forwarders. Considering all these pieces, it can take several years to attract the first permanent carrier.

Securing the first carrier to select you as their primary airport is the most challenging endeavor. Once one carrier selects your airport, it is more likely that others will follow. Carriers and forwarders are very resistant to changing their logistics processes. They are hesitant to switch to a new airport that does not yet have the proven record and experience to demonstrate to a freight handler. Finding ways to minimise changes for the carrier and forwarder is the key. For example, RFD has created a ‘drop station’ next to Chicago O’Hare International Airport (ORD) that allows forwarders around ORD to drop off and pick-up their cargo as normal, as it is logistically still close to RFD. Cost is the first issue considered by forwarders. It is essential that when changing airports that there are no additional costs added to the freight forwarder. Secondly, the service offered by the new airport needs to be equal or better than the forwarder’s current service. It is typically essential to have 24-hour operations available, such as customs, fueling and ATC. Airports can also offer fee-free test flights for carriers to try their facility.

Ultimately, it is important to offer an opportunity to prove yourself and show evidence of your cost and time saving advantages. In the November to December 2011 timeframe, RFD will receive 15 test flights from a carrier based in Asia. These exercises provide an experience where carriers are able to witness a ‘side-by-side’ comparison to contrast their current process with the proposed alternative.

It is not enough for airports to only be able to accommodate their current cargo traffic or even a moderate increase in business. Plans, options, commitment and availability for future infrastructure growth needs to be demonstrated to potential customers. Many alternate airports are ideally suited with independent airspace and room for expansion. This is a critical advantage for attracting cargo carriers who are moving towards the Dash 8. Even prominent air cargo centers around the country, including ORD, may have limited opportunities and more difficulties to provide the necessary accommodations for larger aircraft such as parking. Large airports that have a huge amount of established infrastructure have a bigger task to make the necessary upgrades before being able to incorporate the Dash 8.

Providing room to park is one obvious need, but are you prepared to expand those accommodations if the need arises? Due to the size of the Dash 8, some carriers may not have a choice but to change airports if there is no room to park or manoeuvre the plane. Currently RFD has room to park at up to six Dash 8s, but we are prepared to accommodate additional parking if needed. This is part one of a four phase development that will allow for the parking of 10 Dash 8 aircrafts.

This flexibility and commitment to react quickly and meet changing carrier needs does not go unnoticed by current and potential customers. To demonstrate our ongoing commitment to cargo growth at RFD, we have purchased a ramp-side international cargo center from a private developer, which enhances our ability to be flexible with airlines and handlers. Investing in this type of major cargo infrastructure demonstrates to carriers that the airport is committed to serving their business.

Successful airports find ways to do things differently. They are constantly looking to save cargo carriers money and time, while maximising their customer service. Frankfurt- Hahn (HHN) is a great example of how an alternative airport was highly successful in growing its cargo traffic as well as its passenger service. The ‘drop station’ relationship that HHN has with Frankfurt’s main airport (FRA) is a mirror of the partnership that we have with ORD. When we meet with cargo airlines, many of which utilise HHN, we reiterate the comparison to help illustrate and reinforce the capabilities and benefits of alternative airports.

Those airports that can demonstrate and prove their flexibility, time and cost saving capabilities have potential to secure considerable growth in their cargo operations.

Ken Ryan is the Director of Cargo for Chicago Rockford International Airport. He has more than 30 years of experience in the international cargo and logistics business.

A former soldier and teacher, Ken entered the air cargo world in 1977. His experience in the industry is from the ground up. Starting as an operations agent for Burlington Northern Airfreight, he grew with the company and eventually became the Station Manager at Chicago O’Hare International Airport.

Ken then moved to VP of Sales at Ryder Trucking, Air Freight Division. Ken was eventually recruited to help with a start-up company Link America, which was involved in the movement of international cargo. Four years later Ken decided to go on his own. He was the Founder and CEO of Airmax, a company which gained a reputation as a leader in the global air cargo industry and was featured in stories by CNN and PBS. Ken eventually sold Airmax in 1998-99.