The US airport ageing infrastructure has long been a growing issue. Roy Manuell speaks exclusively to Pittsburgh CEO Christina Cassotis in Dubai about why innovation represents the answer. 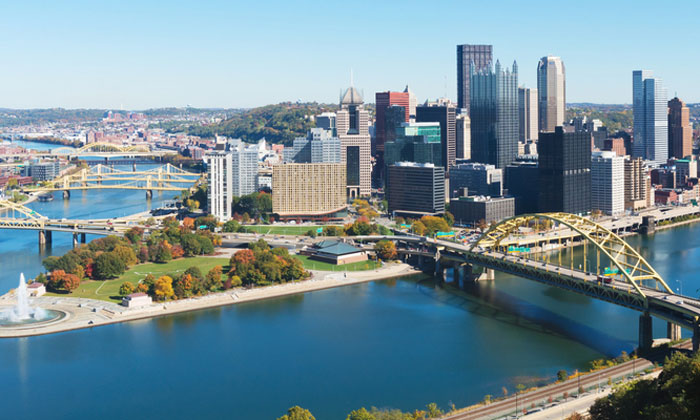 As CEO of Pittsburgh Airport, what’s on your mind at the moment Christina?

In a word, innovation: Why it’s so important, what we’re doing as an airport and why it’s imperative for all airports to innovate. You might say that it’s a pretty static industry and therefore it’s key that we all see progress in terms of innovation.

In light of this, we have witnessed a number of interesting relationships develop and we’re seeing some success as a result.

It’s a pretty static industry and therefore it’s key that we all see progress in terms of innovation.

So you say it’s been a static industry – do you see this changing?

I’d say so. You see those at the forefront of the industry, Dubai for example, that are acting as clear innovators. Dubai is an example of an airport that is looking at and trying to rethink the entire passenger experience conversation. It is aiming to interact differently with its tenants whether they’re airlines, food and beverage retailers or the passengers themselves. I believe for sure that there is a lot being done and we for one are trying to do our part to stay ahead of the trend.

We must acknowledge that the sector needs to learn from best practice – not just within the industry but also from across other industries: retail, tech and many others. Overall, I would say there is a lot of great work being done – but not enough.

Tell us more about Pittsburgh…

Well, Pittsburgh International was originally built as a global hub – it was initially meant to be a mega-hub for US Airways, and was built for that reason 25 years ago. US Airways then pulled out 15 years ago and I was brought in to answer the question as to whether or not there was anything to be done to really change the trajectory of passenger traffic and airline service which had been in decline for a number of years.

And so, in 2 years  we went from 37 destinations served non-stop to 68, we brought in 8 new airlines and I would say that we’re well on our way to answering that question with a resounding ‘yes’. As I often say to people: The opposite of a hub is not not a hub; it’s an origin and destination (O&D) airport. And we can be a fantastic one.

This is not just about bringing in new airline service that meets the needs of passengers both today and tomorrow, but it’s also about how we reimagine and reposition ourselves as forward thinking with respect to innovation.

What are you most excited about in terms of innovation?

What I’m currently most excited about is Pittsburgh’s new partnership with Carnegie Mellon University, a private research university in Pittsburgh that also boasts campus in Doha and we’ve actually just become the first airport to partner with the tech accelerator Plug and Play Tech Center in Silicon Valley. They have a travel and hospitality vehicle and it is my goal to ensure that our airport understands all aspects of what is going on: be it the latest in the rental car, hotel or academic sector.

This is what I’m most excited about. One of our greatest weaknesses at present is the fact that we are so far behind in technology. I believe this paradoxically will become an asset. The airport itself in Pittsburgh is quite simply behind from a tech perspective. So guess what? We can now just leapfrog to the front because I don’t have all of these other systems that need to dismantling and overcoming in order to innovate. We can almost start afresh.

My team’s interest lies more with how can we reimagine our entire airport universe and to do so we cannot operate in a bubble but will be looking around at the bigger picture and examples from around the world. We’re going to just jump in and start.

Given your partnership with academia and the Carnegie Mellon University, this might be considered a rarity in the industry? How do we encourage more industry and academia collaboration moving forward?

I think we start by seeing a few airports take the lead and make things happen. In the US, we are fortunate in that our government allows us to be an Authority and thus we can act quickly. This enables us to act almost as the private sector would and not only do we have a partnership with Carnegie Mellon University but also the University of Pittsburgh and several others, many of whom have campuses abroad. We appreciate the need to learn from academia and are constantly asking: How do we then bring the industry in to partner with them. It really then becomes a three-legged stool; a collaboration in innovation.

It really then becomes a three-legged stool; a collaboration in innovation.

I think airports have been underappreciated and underutilised for a very long time and I am looking to push Pittsburgh and indeed all airports onto a world stage and challenge how we rethink that.

Given the political climate around the world but also closer to home in the United States, do you see this having a positive or negative impact on the aviation and airport sector?

What I can and will say is that it’s great to hear airport infrastructure back on the agenda.

It’s great to hear airport infrastructure back on the agenda.

I definitely feel that it has been neglected and taken for granted in the US for quite some time and visiting the Gulf and going to China, the differences between their approaches and ours is astronomical. Amazing things can be done and there are some beautiful terminals and very efficient airports in the US – don’t get me wrong – but there remains a significant amount of airports that do not function well. I think the fact that airport infrastructure is being talked about in Washington as opposed to just roads and bridges is very healthy for our industry.

Do you think the US is therefore behind in terms its airport infrastructure compared to say Europe?

This certainly depends on how we approach the topic and there is no definitive answer. We’re both significant geopolitical entities and we can see market leading infrastructure in Europe, arguably more so than in the US, but there are definitely terminals in the US that are fantastic. San Francisco and Dallas/Fort Worth International Airport for example, both have the capital and have invested it wisely. I think again there is a lot more to be done – there is no question of that.

Our issue here, certainly for Pittsburgh and many other US airports is not how you build infrastructure. No, it’s how do you modernise appropriately the existing assets to ensure we return to world leaders in airport and aviation. We need to remain competitive. US funding and its very nature prioritises infrastructure enhancement. Overall, infrastructural reform’s return to the agenda is very much welcome from my perspective.

What is the other single biggest challenge then affecting airports around the world?

How do we create enough flex in our space planning, technology and processing to allow for change coming so rapidly? In Pittsburgh, as is the case for so many others, we must question how we prioritise and which innovations we go after first. This is what makes the sector so exciting at present.

And so how do we ensure passenger experience remains at a more-than-satisfactory level in light of ever-increasing volumes around the world?

For me, right now, the most exciting is in predictive analytics. How do we predict passenger behaviour in order to meet their needs, maximise our non-aeronautical revenue and create a seamless experience so that everybody wins. Yes, technology will play a part in this as will human interaction but I think it’s more about how we think about what passengers are doing and may do in the future in order to meet their needs. Technology is an answer, but not the only answer.

Technology is an answer, but not the only answer.

Essentially this stems from data, no?

Absolutely and I would love to meet someone who is 1000% confident in the handling of their passengers’ data. If we are to find a conclusion, I think this will very much define the next few years. 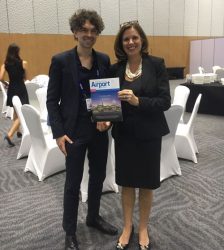 It was a pleasure to speak to Christina Cassotis at the Global Airport Leaders’ Forum in Dubai and it is clear that innovation is very much at the top of the Pittsburgh agenda. For more insight from the event you can follow this link and as ever feel free to post your thoughts and comments below.