As we enter 2017, the future seems at once both exciting and worrying. As the technology sector moves forward faster than other industries can keep up, issues such as cyber security become more and more challenging at a faster and faster rate. To look into which technologies will come to affect most the aviation industry in 2017, we hear an excellent insight from IATA‘s Houman Goudarzi. 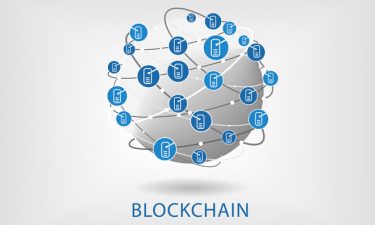 has been intensely in the spotlight across 2016, and will continue riding the wave in 2017. It would be harsh to call it a hype as it’s a genuinely disruptive force to be reckoned with in aviation and any other industry, in particular by intermediaries. Above all, it offers amazing opportunities which go well beyond financial transactions, albeit most of the popularity has been gained through Bitcoin and projects initiated by major international banks.

Some promising cases studies in the aviation space are related to:

Tokenising Frequent Flyer Programs: Blockchain has the ability to turn airline miles into something much more pervasive and valuable outside the defined boundaries of airlines and their limited partners with whom passengers get to spend their miles.

Imagine if your miles were accrued in real-time, and there was community-driven market place for you to use them instead of the limited spend options made available by individual airlines?

I found this article (Why Travel Loyalty Programs Belong on The Blockchain) by Luke Bujarski quite interesting.

When something goes wrong with a passenger’s bag it’s important to have a log of custody changes to be able to determine who is responsible. A semi-private blockchain can cater for this as a neutral ground for reporting custody changes throughout the value chain.

Encryption and hashing may be necessary to safeguard the information.

Another case study would be aircraft parts as they change custody between manufactures, traders, maintenance service providers, and airlines.

Tokenising e-tickets: Smart Contracts can facilitate tokenisation of e-tickets and empower the value chain partners for ticket sales and other actions related to tickets. Imagine if an airline could define the business rules and conditions on how tickets are sold and used by its partners through the use of smart contracts on a blockchain, empowering partners across the value chain to act on behalf of the airline in a secure and efficient manner. 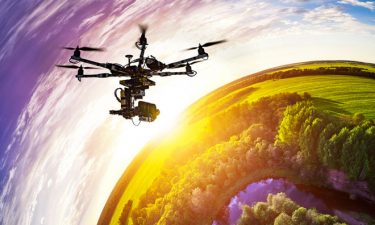 You either love them or hate them, or change your personal opinion according to different contexts. Drones have gained massive popularity among recreational users, and are rapidly becoming more and more affordable. 2017 may be the year of entry in the commercial space. Amazon is leading the “Game of Drones” race and has made some headway. The recent Amazon patent on the use of a flying warehouse shows where things are headed.

Uber has equally expressed aspirations through their white paper released a few months ago, on the feasibility of ultra-short-haul commercial flights in the urban space.

It’s predicting the rise of VTOL (Vertical Take-off and Landing) vehicles offering on-demand flights in urban areas leveraging existing infrastructure (e.g. parking rooftops) as vertiports (airports for aircraft that can take-off and land vertically). Some of the challenges mentioned in the paper include:

Virtual Reality (VR) is often associated with glasses that take you to a virtual world where your actual real movements are translated to the virtual world. On the other hand, perhaps even more relevant, Augmented Reality (AR) is more likely to penetrate the airline and airport space (click here to learn the difference between VR and AR). 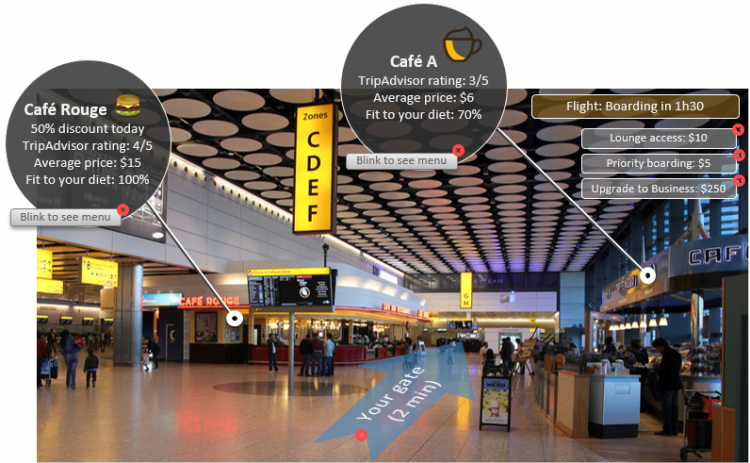 The above image shows a hypothetical AR view of a passenger, where the view is enhanced with information (sensory input, static and dynamic information sources, location, object and context awareness) and functionalities (e.g. buying lounge access by looking at the lounge access button at the top right corner of the view, and blinking twice, which would act as a click of a mouse). 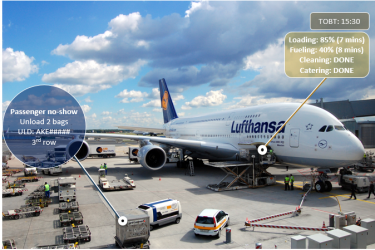 The same could be applied on the airport ramp to support ground operations through the use of the AR technology. 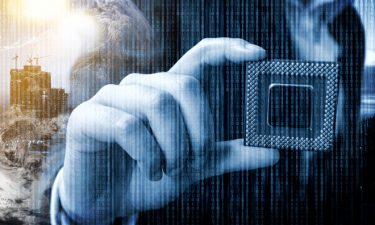 In an extreme scenario a passenger is expected to download the app of the car rental company, the airline, the departure airport, connecting airport, arrival airport, and the hotel. That’s 6 apps for a single trip, which may or may not occur again.

2017 is likely to be the year of dialogue around consolidated chatbot engines that could act as a single gateway for customers.

The airline distribution space is gradually making headway towards a more dynamic and nimble model where airlines are in control, travel agents empowered, and Global Distributions System provided with an opportunity to build new products and services. New Distribution Capability (NDC) industry program has been the driving force in the last couple of years making the necessary standards and guidance available to the industry.

For a long time it seemed impossible to accurately know the location of moving objects (e.g. people) inside buildings. Global Positioning Systems (GPS) aren’t fit for purpose for indoors as the satellite signals are often not strong enough, and the accuracy is not sufficient. With the rise of Beacons technology, airlines, and airports are very likely to start using this technology to provide better/customised services to passengers as they travel through the airport terminal.

Beacons make it possible for airports and airport vendors to know where people are and send them relevant, personalised information. The information might be a gate number, a baggage carousel, flight status, or even a passenger’s favourite coffee shop.” (International Airport Review)

How can airports create new value with edge computing and analytics in today’s changing landscape?