Christian Röhrer, Vienna Airport, provides an overview of the balancing of the economic and environmental considerations of an airport… 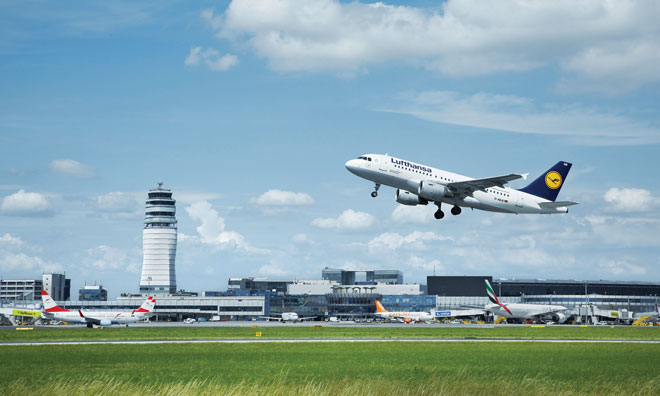 Vienna, Austria’s capital city, has an illustrious artistic, architectural and intellectual legacy shaped by famous former residents such as Mozart, Beethoven and Freud. However, being known as ‘the world’s music capital’ does not mean its 1.7 million residents, and countless visitors, are immune to nuisance noise.

Vienna Airport is an essential gateway to the city and its surrounding region (there were 22 million passenger journeys through the airport in 2015), but with air travel, inevitably, noise follows. The need to balance the economic benefits of an expanding airport with important environmental considerations, especially controlling noise, has been a priority for Vienna Airport for some considerable time. In 1998 we published a concept outlining our future projects. Then in 2001, we began a mediation process with over 50 groups to establish the best way to expand the airport and benefit the local community. The process was designed to make the impact of air traffic acceptable to the affected population.

Plans were agreed in 2005 and the results were recorded in a binding mediation contract. Overall, it was felt that the mediation process succeeded in establishing a broad-based ‘social contract’ which reconciled the opposing interests and conflicts between the aviation industry and the residents’ demand for quality of life. Not an easy thing to achieve!

The mediation process led to agreement on the following:

In their final statements almost all parties involved declared that the procedure and their participation in it had been useful, and they expressly emphasised their satisfaction that the path of cooperative and constructive dialogue will be continued.

Since 2005 we have maintained the Dialogue Forum with relevant parties to ensure everyone is kept informed and that the airport is meeting its commitments. The Dialogue Forum and its Chairman is responsible for ensuring that all contracts are implemented, agreements and measures continuously monitored and evaluated, the path of cooperation and constructive dialogue continued and with commitment and future issues and conflicts of interest addressed in the spirit of the mediation process.

Vienna Airport is far from alone in trying to lessen its environmental impact. In fact, noise-control programmes are implemented by many European airports. However, the objectives, definition of noise zones, calculation methods, conditions of participation and diversity of the measures are very different across the continent.

Noise is such an important consideration for us in Vienna that we go beyond what is required by Austrian law and the limits set by the World Health Organisation (WHO). Vienna International Airport’s noise protection programme sets the limits for continuous noise at just 45 dB(A) at night and 54 dB(A) during the day. Under Austrian law the levels could be as high as 55 dB(A) at night 65 dB(A) during the day.

Rather than calculate an average across the whole year, the airport only evaluates the six busiest months of the year. With the low-traffic months removed from the calculation, the limits agreed for this programme are far more stringent than the law requires.

We know that exposure to excessive noise is not just annoying to residents, but it can also affect their health and the educational attainment levels among children. That is why we take noise concerns so seriously.

Vienna Airport finances a number of measures to mitigate nuisance noise for affected households. The technical noise protection measures aim to protect residents’ health and improve the quality of their housing.

In order to help meet these objectives, noise limits for residential spaces were set. Inside the room with the windows closed, a continuous noise of 30 dB(A) should not be exceeded, and it should not reach peak levels over 53 dB(A). If a residential property is in the defined noise zone near the airport, rooms can be checked acoustically at the resident’s request. The main measures to reduce nuisance noise are improving the tightness of windows and doors, replacing windows and fitting sound insulation features.

With considerable time and effort from so many people having gone in to reaching agreement about the airport’s operations, and the binding contract, it is vital that we are able to provide strong evidence for the noise levels from the airport. To do this we use sound mapping software. This allows us to demon – strate exactly how much noise is made and how far it reaches.

A year ago, having compared a number of providers, we found that SoundPLANnoise was the best option for us. We were able to import flight track data and flight information, and calculate noise levels to ensure we are meeting the agreed noise levels. Data can be easily imported for different time periods allowing effective comparison and assessment.

Radar data is collected at fixed receiver points around the airport which are constantly monitoring the space nearby. The data includes the position of the aircraft (its height as well as its GPS coordinates), the type of aircraft and a time stamp. With this data, and using the mapping software, we can calculate the speed and emissions from every aircraft flying in or out of Vienna airport. SoundPLAN software contains a vast library of information on flight profiles, including the types of aircraft and weight differentials, making our task much easier.

The software allows us to not only show current levels of noise, but can also predict future levels and sound dispersion for planned flights, which is vital for future development.

Plans for a third runway at Vienna Airport are currently undergoing an environmental impact assessment. In the meantime, the airport is concentrating on terminal, retail and airport city operations. Our growth strategy would not be possible without the support of the residents in the surrounding villages and that would not have been possible without open and honest discussion through the mediation process. There is now a greater understanding that the region can only develop positively if both the economic interests of the airport and the interests of the inhabitants of the region are considered equally in further planning.

When it comes to airport development, it seems that lots of people talking is the best way to reduce the noise.

Christian Röhrer started his career at Vienna Airport in 1978 at the environmental affairs department and has led the division since 1983.

As an expert for all types of air traffic noise evaluation procedures, such as noise measurements, noise zone calculations and aircraft noise and emissions as well as flight track monitoring and air navigation, he has an important role in all environmental issues around Vienna Airport. Christian is also a member of the environmental units of German Airport Association (ADV) and Airports Council International (ACI).

ICAO Council agrees to safeguard CORSIA due to COVID-19

How to make airports sustainable and reduce the environmental impact