Examining the use of robotics in airport customer service

Posted: 24 May 2016 | International Airport Review | No comments yet

In December 2015 KLM Royal Dutch Airlines became the first airline in the world to deploy a socially-aware robot to help passengers navigate their way through the airport. The trial, which took place at Amsterdam Schiphol, raises the question of whether there is a place for robotics in the customer services industry and if airports can benefit from the innovative technology… 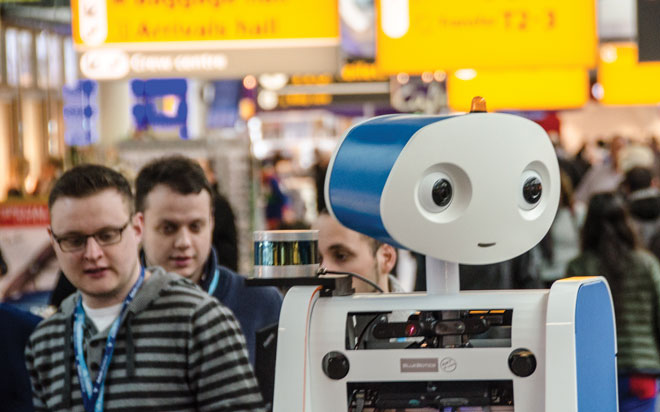 The SPENCER (Social situation-aware PErceptioN and action for CognitivE Robots) project is a European Union-funded research project aimed to advance technologies for intelligent robots that operate in human environments. Robots are not a new concept but scientists are now working to create new technologies to enable robots to analyse humans with their sensors in order to act more naturally and unobtrusively. Can robots learn and reproduce human social behaviour? How should robots communicate with users in ways that are socially aware, safe and efficient at the same time? These questions were addressed in the SPENCER project, which has broken new ground in understanding the human-robot relationship and for designing effective cognitive systems in human-populated spaces, such as airports.

Scientifically, the novelties with SPENCER are that the robot understands social behaviour. “What makes the robot unique is that it can deal with social situations between people. It can ‘see’ and analyse people nearby using its sensors and can reason possible social relations between people, such as whether they are a family or travelling as a group,” explains Kai Arras, Project Coordinator of the SPENCER robot project at Albert-Ludwigs University of Freiburg. This, and the ability to understand hierarchies, enables the robot to estimate what a group of travellers are doing and who would be the best individual to address in the group. Another breakthrough is the ability for SPENCER to learn socially normative behaviours, enabling the robot to be polite in the way it navigates among pedestrians and respecting people’s personal space. “It can learn about – and then comply with – social rules and act in a human-friendly way,” says Arras. SPENCER is also programmed to learn maps of highly dynamic environments that change over timescales.

At Amsterdam Schiphol up to 80% of passenger traffic comes from transfer passengers and every day travellers miss their connecting flights for many reasons including delays, short transfer times, losing their way and language barriers. The SPENCER robot was designed to help passengers find their way around the airport and guides transfer passengers along the shortest route to their departure gate.

René de Groot, Chief Operating Officer at KLM, explains: “We are continuously seeking ways that transfer passengers can connect more smoothly. KLM believes that robotics will play an increasingly important role in aviation in the coming years. These technologies will supplement the service offered by our airport staff who will then have more time to assist passengers with more challenging needs.”

Measuring 193cm in height and weighing 250kg, the SPENCER robot has two 2D laser scanners; one 3D laser scanner; four depth cameras; two stereo vision cameras and tactile bumpers. The robot has been designed with interaction modalities and can tilt its head and eyes. It also features a 17” touch-screen which shows additional passenger information such as time and distance to their gate, loudspeakers and a passport and KLM boarding pass reader. There are two high-performance laptops on-board; three PCs; one motion controller and ROS middleware (Figure 1). The robot currently communicates in English but other languages can be easily programmed.

SPENCER robot was deployed at Amsterdam Schiphol for the first time in December 2015 following a series of tests at partner locations in Toulouse, France and Freiburg, Germany.

An airport is a complex and challenging environment for a robot – changing light conditions and glass surfaces are problematic for a robot’s sensors, while dense and highly dynamic crowds of people are a challenge for its perception, cognition and planning algorithms. Moreover, gate areas and walk-in shops which can change their look multiple times a day pose challenges to a robot’s mapping and localisation components. During the 2015 trial, SPENCER became overwhelmed by these factors but the insights gained during the tests enabled the project team to further improve the robot in preparation for the final demonstration in March 2016, which was completed successfully.

Part of the trial was to see if SPENCER could scan a passenger’s boarding pass and take them to their gate. The boarding pass is scanned via a scanner in SPENCER’s ‘stomach’. The robot then takes that information and uses its ‘knowledge’ to guide the passenger around the airport to their gate; adjusting its speed to that of the passenger and letting them know how long it will be until they reach the gate. The trial was to take transfer passengers from B28 to C36 at Amsterdam Schiphol.

Safety-wise, the project team had to conduct many tests on robot safety using standards practices and protocols and consequently improved the robot’s hardware and software to ensure the robot was safe to be deployed in a human-populated environment. In addition, throughout all testing a human operator was present with a remote emergency button enabling them to shut the robot down instantly, if necessary.

Looking to the future, research into soft mobile robots that could imitate key features of the human body will take place. If realised, this type of robot would be safer and could travel at higher operational speeds among humans. Another line of research will look further into social scene understanding. Challenges involving more cognition, greater learning and interaction and more comprehensive navigation remain and will be researched further. There are many factors still to consider and research before the SPENCER robot can become a viable commercial product, but the project has been instrumental in providing unique insights into those original questions that the project team set out to answer, and it will be interesting to see if this ground-breaking technology is deployed into the airports of the future.

To find out more, visit: www.spencer.eu