With Istanbul New Airport due to open in 2018, construction on the €10.3 billion project advances rapidly on what will be one of the largest airports in the world and the biggest transfer hub in Europe… 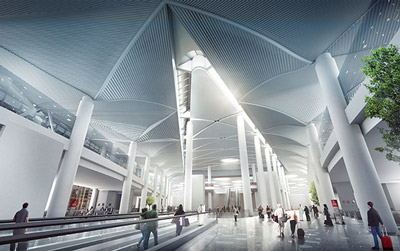 With Istanbul New Airport due to open in 2018, construction on the €10.3 billion project continues on what will be one of the largest airports in the world and the biggest transfer hubs in Europe.

At present, 10,000 people are working on one of Turkey’s largest infrastructure projects situated 35 kilometres from the centre of Istanbul on the European side of the city. Once opened in 2018, Istanbul New Airport will employ 100,000 people directly and handle more than 90 million passengers per year, with this figure growing to 150 million in 2023 and extended to 200 million if needed. Construction on the first phase of work began in May 2015 including the build of a 1.3 million m2 main terminal alongside three independent runways, eight parallel taxiways, air navigation services, communication and meteorological systems, and other service buildings. The airport will be integrated into the entire public transportation system via metro and rapid transit connections. The airport will also be connected to the region’s proposed third Bosphorus bridge and the North Marmara highway. According to contractor and operator of the airport iGA, the design of the terminal buildings will reflect the richness and beauty of Istanbul’s historical structures, prioritising passenger comfort using state-of-the-art technology. The airport will also incorporate the iconic tulip-shaped 96 metre- high air traffic control tower.

10,000 people working on the construction of Istanbul New Airport

Construction on the main terminal is well underway with the roof currently being installed spanning 145,000 square metres.

Yusuf Akçayoğlu, IGA CEO, highlighted the roof installation as a significance step in the progress of the project: “Installation of the terminal pier roof module is a construction milestone for the Istanbul New Airport. The installation is carried out with the efforts of local manufacturers and engineers, and it continues at full speed, same with every other aspect of the construction. Manufacturing and installation works are also right on schedule.” Following completion of all four phases in 2023, Istanbul New Airport will offer flights to more than 350 destinations and be home to over 150 airlines. Flights will take off and land on six runways with passengers transferred via three terminal buildings. The project also incorporates an ‘Airport City’ with a business centre, hotels, office buildings and a medical centre. The 76.5 square kilometre development will become a ‘green’ airport generating its own energy, purifying wastewater, making use of rainwater, and recycling its waste. Built on a greenfield site, iGA plans control and minimise any environmental impact it may cause during the construction and operation of the airport. The company is committed to maintaining the ecological quality of the area and to preserving plant and animal diversity despite moving over 1,000,000 cubic meters of soil every day.

On route to becoming a ‘green airport’

Studies are currently being undertaken observing natural life, biodiversity, and human impact on the nature around the airport. Species of flora naturally growing on the project site have been secured and stored for later use in landscaping the airport. Istanbul New Airport will remove capacity issues from Istanbul’s current airports – Sabiha Gökçen and Atatürk Airport – which collectively handled more than 80 million passengers in 2014. Once fully operational, Atatürk Airport will be closed down reducing congestion in the skies above Istanbul.