With a special focus on renewable energy, solar energy has always been a potential source to meet the country’s energy needs. From the day it took over the operations and maintenance of Indira Gandhi International (IGI) Airport, DIAL (Delhi International (P) Limited) has been in the forefront when it comes to improving infrastructure and other facilities.

DIAL has also stayed at the cutting edge of technology, sparing no costs for achieving its stated goal of sustainable aviation. It is no secret that running a giant airport like IGI requires large amounts of electricity, but DIAL has kept in mind the global environmental policies and with its commitment to providing a Green Environment, the operator has initiated various energy audits and implemented energy saving measures in every possible manner. In fact, on 8 September 2011, DIAL became the first airport operator certified with ISO 50001:2011 (Energy Management System).

However, there is a limit to which energy efficiency can be pushed, and realising this, DIAL has established a completely pollution-free solar power plant airside which meets the airport’s day-to-day requirements airside. The generated power is used as a source of energy for aeronautical ground lighting (AGL) systems and ancillary buildings situated in IGI Airport’s airside.

Taking advantage of large stretches of free land parallel to the runways, the solar power plant was set up adjacent to the 4.43km-long runway 11/29. This plant is the first of its kind in Asia and among very few airside power plants in the world. The plant is rated at a maximum output of 2.14MW at a given time during the day. As the plant’s entire power is exclusively used by IGI Airport, it is a ‘captive’ power plant.

The pre-award activities included the following:

The location of the site was based on the distance of the plant away from the runway, clearance from instrument landing systems (ILS), critical and sensitive areas and the height of the structures being well within the permissible limits as specified by the Indian regulator DGCA’s Civil Aviation Requirements. An exhaustive Glare Analysis Study was conducted to assess the impact of the reflection from the solar power modules on sun movement throughout the year as per the guidelines.

The plant is state-of-the-art with high efficiency, anti-reflective coated photovoltaic solar power modules (8,736 numbers and each of 245W), and is installed airside, across an area of around nine acres. The individual modules are installed on galvanised iron structures with a facility for two tilts to meet the changing positions of the sun throughout the year. The solar modules are connected to 16 combiner boxes and the voltage generated is connected to inverters of 630KW capacities. The direct current voltage is converted to alternating current by these inverters and after synchronisation with the low tension voltage received from the grid, the solar power is fed to two 1600 KVA transformers and then stepped up to 11 KV for power evacuation to DIAL airside high tension distribution network for effective use.

The design requirement was as follows:

For the effective monitoring of the units generated by the plant, a weather monitoring system is also installed as a part of project scope to ascertain the energy produced as per the actual solar radiation every day. A pressurised water washing system for the entire plant area is also provided for the cleaning and maintenance activities of the modules to get the desired output. Supervisory Control and Data Acquisition (SCADA) is used for monitoring the performance of equipment, providing alarms and report generation. The entire plant area is being planted with slow growing grass so as to have minimum maintenance and at the same time minimising bird activities and reptile movement and also for the preventive measure to soil erosion.

The project is registered with the Ministry of New and Renewable Energy and the customs duty and excise duty exemption benefit for the materials which are exclusively used for this project are availed. The plant was duly inspected by Central Electricity Authority and the approval was obtained for commissioning of the plant from 15 January 2014, and it was made functional. The project is under process of approval for REC certification with the State Nodal Agency.

In addition to the various energy saving measures being implemented at the terminal and airside at IGI Airport, DIAL plans to explore and expand the solar power plant capacity to ensure the maximum utilization of green energy.

As a group, GMR also proposes to establish a solar power plant at the city side of Rajiv Gandhi International Airport, Hyderabad, during this financial year.

Successful establishment and completion of such a big capacity at the airside of an Airport would surely be a trendsetter in India.

The power plant in figures

The energy produced by the plant is adequate to meet the needs of all AGL systems installed at the three runways, taxiways and parking stands at IGI Airport.

Mr Indana Prabhakara Rao, the CEO of Delhi International Airport (P) Limited, is a seasoned professional with over 28 years of experience in various businesses. He holds a first class Master’s degree in Industrial Engineering. In 1995, his first assignment for the GMR Group was to build and commission the world’s largest diesel-powered power plant in Chennai, which produced 200MW. Entering the aviation industry in 2006, Mr Rao achieved a landmark of delivering a 34 million capacity Terminal 3 of Delhi Airport along with South Asia’s longest runway at 4,430m in a record 37 months. Mr Rao manages a team of nearly 1,500 while maintaining strong ties with close to 60,000 stakeholders at the airport. His leadership skills gelled with capability of handling stakeholders are the baseline to his passion for taking up challenging assignments. 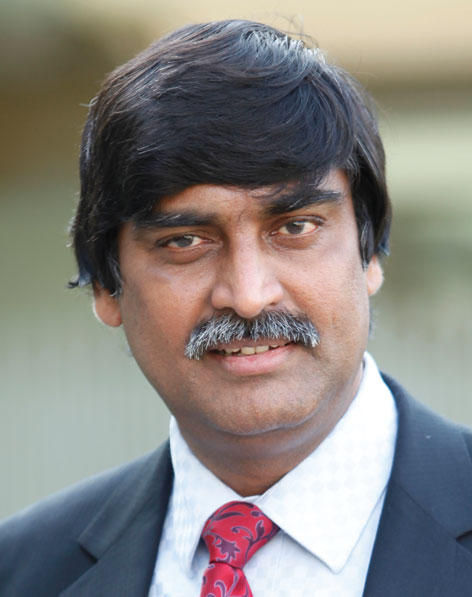