Gordon Dewar and Ian Lang – Edinburgh Airport’s Chief Executive and Capital Director, discuss the journey they have been on so far with the airport build, and what the future holds. 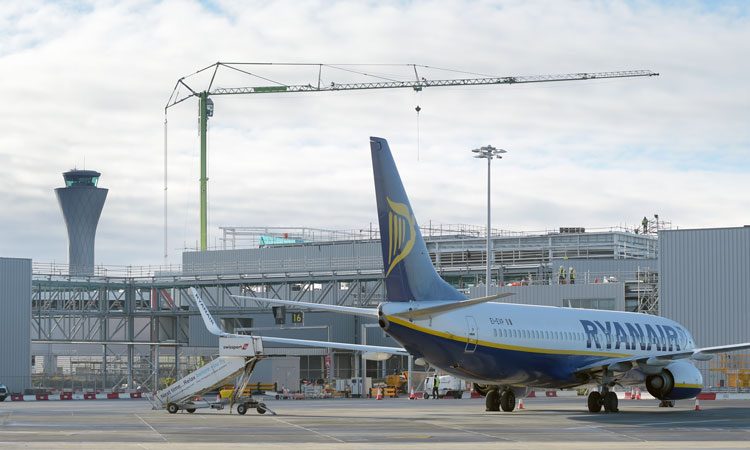 IF YOU BUILD it, they will come” – those of us who are familiar with ‘Field of Dreams’ know the phrase well. Perhaps not exactly critically acclaimed, but this old baseball movie recalls ideas of initiative and innovation – the excitement of creating something from scratch.

Back in the late 80s, Edinburgh Airport was still a domestic airport. Originally a First World War aerodrome, then used by the RAF, it wasn’t until the end of the 1970s that the airfield became the commercial ‘Edinburgh Airport’ we now know, and many more years before it became the international terminal we recognise today.

With its first terminal designed to handle a mere one million passengers a year, the idea of being the busiest airport in Scotland – taking 14 million passengers to over 150 destinations in 2018 – would have been difficult to imagine.

Edinburgh Airport had to support unprecedented traffic increases within the constraints of its existing infrastructure. Growth didn’t happen in a linear, containable fashion. It exploded after the original concrete had already been poured, and after the people had already arrived: Once they’d built it, they kept on coming.

In 2012, Global Infrastructure Partners (GIP) took ownership of Edinburgh Airport from BAA and committed to a £150 million investment programme, also known as the 2040 Masterplan, to enable development across the business.

Since then, Edinburgh Airport has experienced enormous growth, with up to one million new passengers added to its traffic totals each year. Today, it’s the busiest airport in Scotland and the sixth busiest in the UK.

Edinburgh Airport’s Chief Executive, Gordon Dewar, has held his role since the GIP takeover. He said: “GIP promised growth and development in every area of the airport and that’s exactly what we’ve achieved because they saw the potential we had and didn’t treat us like a branch office. Month after month we see new records being broken, with our increased passenger numbers reflecting our ability to create growth through choice – be that in terms of our destinations, routes or airline carriers.

“It’s an incredible testament to the investment we’re putting into, not only Edinburgh Airport, but Scotland’s capital and the country as a whole. The airport is a huge asset which serves both our Scottish population and the millions of international passengers who travel across the globe through our airport.

“Since that study, we’ve added three million passengers, handling 14.3 million in 2018. That suggests we’ve generated an additional 6,000 jobs and another £270 million GVA across the country.”

Yet growth seems to have turned into a somewhat contentious word. Especially within the aviation industry, which is under constant pressure to perform in a more environmentally sustainable way.

“We believe the answer is yes – if done right,” Dewar continued. “Of course, we recognise the challenges that come with continuing to grow responsibly. Growth is bigger than a statistics game and it comes with a whole array of positives and negatives which can’t always be numerically quantified. We have to consider not just passengers and the airlines we work with, but our local communities and environmental impact too.”

While many of these improvements have been taking place behind the scenes, the first physical milestone of the programme was the completion of the new terminal expansion (TEX). The £75 million project is the biggest in a generation at the airport and officially opened in June.

Capital Director of Edinburgh Airport, Ian Lang, headed the projects team for the expansion. “TEX was the first big development we needed to address, firstly for departure lounge capacity and the creation of gates to service larger aircraft. Secondly, it delivered an integrated outbound passenger flow onto those aircraft and an efficient inbound international route to immigration.”

TEX is quite literally a concrete manifestation of development. But for the past five years, less obvious changes have been happening within the airport’s walls which have revolutionised the passenger experience. Lang continued: “Before we even consider big builds like TEX, one of our driving principles is how we first maximise our existing assets. Over the past five years, we’ve created a robust 2040 plan. It aligns with passenger growth and technology developments on the horizon.

“The demand for footprint is going to shrink while the necessity for technology to work efficiently will grow. For example, just look at the check-in area – we’ve saved money and space on traditional desks by installing self-service machines. That’s a simple yet effective example of how we’re making tactical investments.

“Everything hinges on being able to forecast for different growth trajectories and developments. We’ve had incredible, and at times surprising, growth which we’ve had to accommodate at short notice. Going forward we need to think about how much growth we build for and when we take that action.

“We don’t know the answers to everything right now, we need to give time for tech to evolve, but we also need to make sure we have the options and flexibility to meet new demands when they do arrive.”

Lang wasn’t at the airport under the old ownership structure but said one of the key reasons it’s managed to plan and build effectively is the approach favoured by GIP and senior management.

“Numbers talk,” added Lang. “Our capital programme was externally audited by Independent Project Analysis in 2018, ranking us best in class for the majority of the measured components.

“Credit for this success is largely down to our sponsorship model. This means that the business is at the core of decision making for the execution of projects – they define the requirements, they set the goals and priorities and they are accountable for steering the project.

“We don’t have a blank greenfield site with zero constraints, that’s growth in a utopian world, so we have to be smart about our decisions. The key in that is making sure the operation is always embedded in the project.

“Whether that’s IT, retail or otherwise; they become instrumental in driving decisions. This creates an in-built support function which allows us to accomplish a balance between what’s best for the project and the overall business. We’ve proved the success of that model with TEX and we’ll continue to implement it going forward.”

Looking ahead to the future

Much like the aviation industry overall, there are always winds of change. Clearly, growth isn’t a straightforward game. For Edinburgh Airport, TEX is only the first inning.

“In the next five years, we’ve got another £350 million to invest in our infrastructure” Dewar continued. “Our job as an airport is to create the best environment for passengers through choice, whether that’s being offered through airlines, facilities or retail propositions.

“Our immediate plans will see improved efficiency through the latest tech, more gates, a new security hall and long-term solutions to our current road-access issues. But projects for future improvements and developments are also already in the pipeline.

“There’s no underestimating the fact that challenges lie ahead. But that’s not something we shy away from – the challenge of growth is one we’re grateful for. By keeping the obstacles we face at the forefront of our approach, we’ve committed to making long-term decisions which find responsible solutions, such as the environment.

“The industry has already broken the link between passenger growth and carbon growth, and I think it can soon reverse carbon growth while continuing to service more passengers and reap the economic benefits. Edinburgh Airport has signed up to be carbon neutral by 2050 and we’re looking at ways of accelerating that timeframe and extending that commitment right through our supply chain. We believe Scotland can really take a lead in this area and set examples for sustainable aviation and tourism that other and bigger countries will want to follow,” stated Dewar.

“In doing so, we will continue to grow in a sustainable way which benefits passenger experience as well as Scotland’s relationship with the rest of the world.”

As Dewar said, progress in this way isn’t easy to pitch. Growing successfully and sustainably is a home run all airports are chasing, but Edinburgh Airport is stepping up to the plate to make it happen.

GORDON DEWAR took up the post of Chief Executive in July 2012 and has overseen significant capital investment in capacity, productivity improvements and customer service enhancements. Previously, Dewar spent four years with BAA running Glasgow and Edinburgh airports through periods of extensive investments in terminal capacity and passenger growth from 2007 to 2010. He then spent two years as Chief Executive at Bahrain International Airport creating an independent and profitable business for the first time after a carve out from government.

Since joining Edinburgh Airport in June 2013, IAN LANG has led the delivery of the airport’s capital investment portfolio. In his six years at Edinburgh he has led a significant restructure of the delivery team, embedding project management capabilities in house in order to enable a business-led investment programme that supports growth. Lang also has functional responsibility for the airport’s long-term strategic development alongside master planning and the capital investment plan.