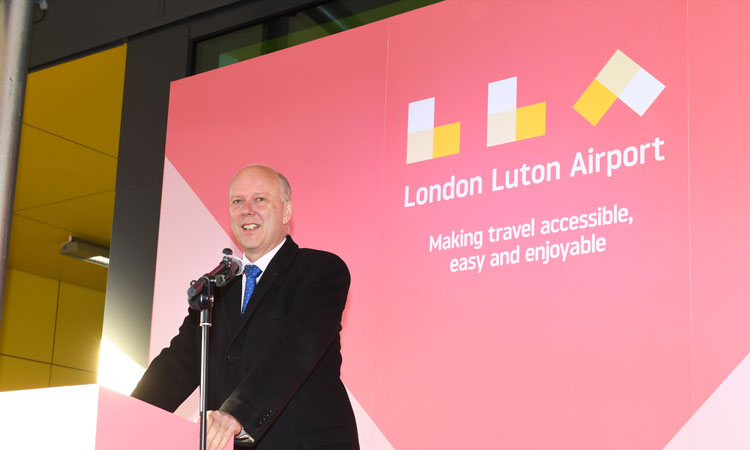 The £160 million redevelopment has been the biggest in the airport’s 80-year history and focused on making passengers’ journeys easier, quicker and more enjoyable, with significant improvements being made in the terminal and to the ways in which people get to and from the airport.

The transformation of the airport will increase its annual capacity by 50 per cent to 18 million passengers by 2020. Since the work began passenger numbers have increased 35 per cent, making LLA London’s fastest growing airport, with more than 16.5 million passengers expected to fly in 2018 – an increase of five per cent on 2017.

Chris Grayling said: “London Luton’s investment firmly puts passengers at the heart of development and will improve the experience of those using the airport for business or holidays. Supporting thriving airports like London Luton will form a part of the Government’s Aviation 2050 consultation, ensuring the benefits of transformation are felt across the local area.”

Nick Barton, LLA’s CEO, said: “2018 has been a milestone year for LLA. We celebrated our 80th anniversary in the summer and now we have completed our three-year transformation which brings a host of benefits to passengers. This is a new era for LLA. We are the fastest-growing major London airport and are now in a position to play an increasingly important role in the UK’s aviation network.”

What passengers can now find at LLA:

Gavin Shuker, MP for Luton South, said: “The significant improvements not only bring benefits for the passenger but also for the local economy. I’m grateful to all those who’ve worked on this major redevelopment and look forward to the remaining pieces of the jigsaw, like the DART, helping London Luton Airport grow from strength to strength.”

Johan Lundgren, CEO, easyJet, said: “As the largest airline operating to and from London Luton Airport, we are excited that the airport’s transformation will benefit the seven million easyJet customers who use the airport every year. This transformation project was a key factor in our commitment to long-term growth at the airport, so it’s great to see its completion.”

Owain Jones, Managing Director, Wizz Air UK, said: “London Luton has been the home of Wizz Air in the UK since our very first flight in 2004 and we look forward to welcoming ever-more customers through the new terminal’s doors very soon. Wizz Air now offers 54 low-fare routes from London Luton Airport and, whether travelling for business or pleasure, the new facilities provide a variety of great food and shopping options as well as fast and efficient connections to London and the rest of the UK.”

Cllr Hazel Simmons MBE, Leader of Luton Council, said: “The operator’s successful transformation programme is another pivotal moment in London Luton Airport’s development. Together with our own investment in the £225 million Luton DART, a world-class passenger experience is being created and setting the bar for how our own airport company wants to take the airport’s growth forward in a responsible way and ensure that everyone can benefit from the economic and social opportunities this will create.”

Hilary Chipping SEMLEP’s Chief Executive, said: “We recognise the importance of London Luton Airport, a key asset for the future success of the SEMLEP economy. There’s significant business opportunity in the connections enabled by the airport which is important for the development of the Oxford-Cambridge Arc.”

Carolyn Fairbairn, CBI Director-General, said: “Now more than ever, unlocking new aviation capacity to deliver global trade links is critical for a strong UK economy. With London’s airports fast filling up, extra capacity will drive trade and investment, create new jobs and help British businesses thrive at home and abroad. Luton’s new terminal is a vital part of this strategy, and will complement expansion schemes at other airports.”

Justin Richardson, Chief Executive of Bedfordshire Chambers of Commerce, said: “The culmination of LLA’s redevelopment marks a significant moment for the local community, which is set to benefit from the creation of 10,000 new jobs. The redevelopment will also increase the airport’s economic contribution to the local economy to £1.4 billion by 2030, allowing local residents to share in the benefits of a fast-growing and successful international airport.”