Air Nugini plane has overshot the runway at Chuuk International Airport and has sunk in the lagoon which is just past the airport, all passengers and crew were rescued, with no fatalities. One still remains unaccounted for. 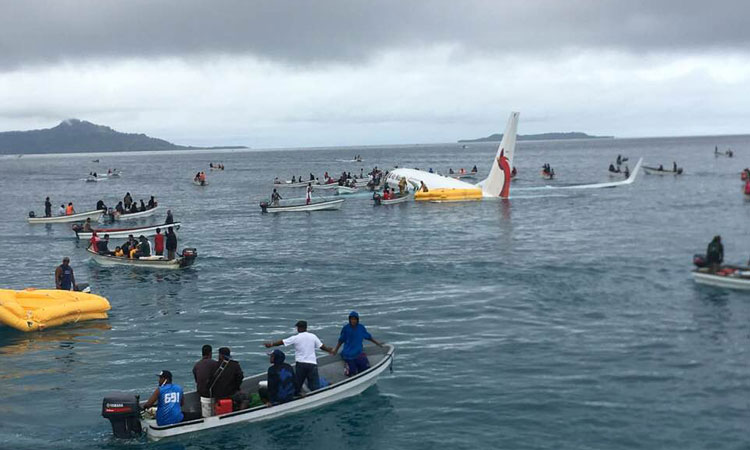 A plane landing at Chuuk International Airport has reportedly missed the runway and has crashed into the lagoon just off of the airport. The runway, is 1,831 x 46m, which is considered short with Heathrow’s runway measuring 3,902 x 50m.

Jimmy Emilio, general manager of Chuuk Airport at Weno in Micronesia, told Reuters: “It was supposed to land but instead of landing it was 150 yards short and she went down. We don’t really know what happened … people were rescued by boats – 36 passengers and 11 crew were all rescued, only the plane is sinking right now.” In a statement from Air Niugini, the operator of the plane, they said: “P2-PXE was operating scheduled flight PX 073 between Pohnpei and Chuuk Airport in FSM when the incident occurred. The incident occurred at 10:10 am FSM local time. Air Niugini has been informed that the weather was very poor with heavy rain and reduced visibility at the time of incident. The aircraft had 35 passengers and 12 crew members on-board, all of whom were able to safely evacuate the aircraft.”

Passenger Bill Jaynes said in a video posted by the Pacific Daily News website: “I thought we landed hard until I looked over and saw a hole in the side of the plane and water was coming in. I thought, well, this is not like the way it’s supposed to happen. Water was waist-deep in the cabin before rescuers arrived.”

Emilio told the BBC: “The plane crashed in the lagoon, about 160 yards away from the runway. Right now we don’t really know what happened. Investigations will start earliest tomorrow, but [for now], operations are starting again as usual in the airport.”

The aircraft was on it’s way from the island of Pohnpei in Micronesia to Port Moresby, the capital of Papua New Guinea, and was scheduled to stop at Micronesia’s Weno island on route.

Sir Kostas Constantinou, Chairman of Air Niugini, said: “It was of great concern to learn [over the weekend] that one of the passengers on the flight was, and still is, unaccounted for. Subsequently however, an inspection of the entire submerged cabin of the aircraft by the US Navy seals, further corroborated by other eye witness reports who saw the passenger board one of the dinghies on Friday, has confirmed that all passengers safely evacuated the aircraft at the time of the accident. Local authorities and the airline are continuing to search for the whereabouts of the missing passenger.”

Most of the passengers were returned to Port Moresby on a special Air Niugini Fokker 70 flight on Saturday 29th September, where they are being cared for by Air Niugini staff and the various Consular representatives and officials, until they are ready to board onward flights to their respective final destinations. Many of these passengers have already started leaving Port Moresby today.

A further two passengers who were initially hospitalised were able to return to Port Moresby this morning, Sunday 30th September, and are being similarly assisted.

Four other passengers remain hospitalised in Chuuk, however their condition has now stabilised and they will be transported to Guam very shortly for further treatment.

Constantinou continued: “The Acting CEO, his executive team and the entire staff of Air Niugini acted throughout with calm and professionalism from the airline’s Port Moresby base. They had the situation monitored and under control the whole time.”

A thorough investigation by the responsible authorities and the airline has already commenced to determine the cause of the accident.

Sir Constantinou concluded: “Our focus now is to care for all the passengers and crew involved, and we will continue to provide support and assistance to them over the coming weeks. Our thoughts and prayers go out to all of them, together with their families and friends.”