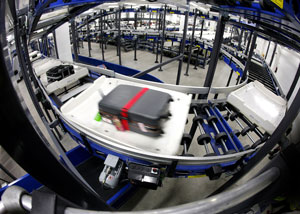 Crisplant – part of BEUMER Group and a leading global supplier of automated baggage handling systems – has been awarded a contract to supply an extension to the CrisBag® baggage-handling system installed in Terminal 2 at Munich Airport. The airport was the first to use the CrisBag® high-speed baggage-handling system, when Terminal 2 was completed in 2003. Crisplant was awarded the contracts to design, manufacture and supply the CrisBag® system extension, with the system layout, engineering, installation, commissioning and system integration being undertaken by the main project contractor Siemens.

One of the key priorities for the baggage handling system was a thirty-minute transfer connection time which was essential to Munich Airport’s continued growth as an international air-traffic hub. A satellite terminal is used for remote baggage handling with a 500-metre tunnel connection to Terminal 2, and a second tunnel connection to Terminal 1. The baggage connection time only allows 12 minutes for each item of baggage to be processed and allocated to the correct make-up position. To achieve this, the CrisBag® system combines very high-speed transport with special totes which enable 100% track and trace throughout the baggage-handling process including during X-ray scanning and in the Early Baggage Storage (EBS) system. This minimises the risk of baggage missing the connecting flight and also allows baggage to be easily removed from the system if a passenger fails to board the connecting flight. The original CrisBag® system is built on four levels, with transport belts covering almost 40 kilometers and EBS for 3900 items of baggage. The new contract will extend the capacity for storing empty totes in several locations throughout the system, as well as adding capacity for a further 1000 items of early baggage.

Marco Butz,Head of Engineering and Infrastructure of the Terminal 2 Management Company Airport Munich explains, “We are very happy with our existing system and it was the obvious choice to optimise the CrisBag® baggage handling system to increase overall throughput and provide additional capacity to support continued growth in passenger numbers. The speed and reliability of the baggage handling system plays a major part in providing a positive passenger experience.”

Crisplant’s Klaus Schäfer, Managing Director, adds, “The CrisBag system allows Munich to process and transport baggage very quickly over long distances, whilst also giving them the flexibility of being able to locate and monitor the security status of any item of baggage, at any stage of the baggage handling process.”

The project is scheduled for completion end 2012.