A year of transformational change in technology and staff management has proved rewarding for Europe’s busiest airport. 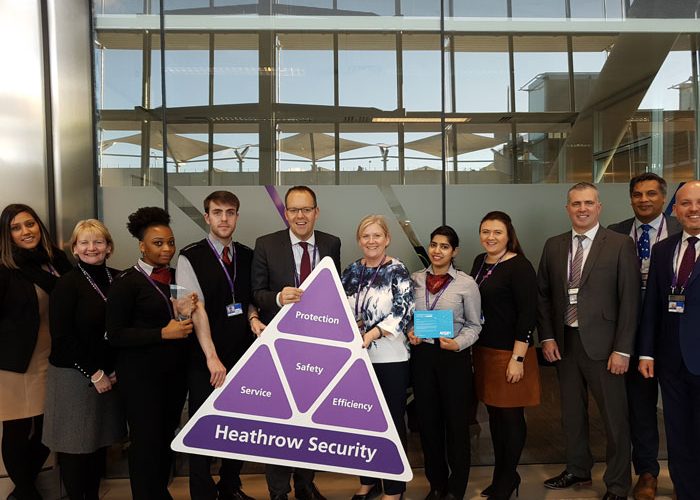 CONGRATULATIONS: The team at Heathrow

Heathrow Airport has won an International Airport Review Award for Security after a series of changes in 2016 boosted passenger experience and staff contentment.

The European megahub brought in new security equipment, including the Terminal 5B enhanced lane upgrade and body scanners, and injected new life into their management system last year.

As a result of the changes, hands-on-body searching fell by 70 per cent. With the installation of four enhanced lanes on the Terminal 5 South Departures Concourse alongside two additional escalators, a 12 per cent increase in capacity was achieved through a rise in flow rates from 144 passengers per lane per hour to 165.

Heathrow’s Security Director Tom Willis, Security Director said: “We are honoured to receive this award on behalf of our security colleagues and stakeholders who work incredibly hard to keep a record number of travellers safe and deliver outstanding customer service.

“Heathrow’s status as a world-class airport is down to the quality and the expertise of our colleagues and it’s great to see the team’s efforts to make this one of the best airports in the world recognised. We couldn’t be more proud of the progress made so far, and look forward to do even more to improve the experience of our passengers and stakeholders in the years ahead.”

The management system was changed to replace the transactional process of compliance standards to a framework of coaching and development. All Security Managers were briefed on the process and a ‘Coachable Moments’ one-day leadership module was developed. This supported Security Managers in developing and practising their coaching skills and style. Over 34,500 coaching conversations were held between June and November 2016.

As a result of these new managerial systems among other changes, the average number absences per employee fell by more than 8 per cent.

One of the comments from the judging panel was: “Heathrow Airport has achieved an effective blend of human factors and technology solutions to optimise passenger throughput and enhance the safety and security of passengers.”

The Awards were launched to celebrate excellence in the industry – entrants were asked to put themselves forward as a trailblazer in a least one of nine categories. International Airport Review received 131 entries which went to a public vote via the website. Response was unprecedented, with over 77,000 votes received from the global airport community. International Airport Review then produced a shortlist of 27 companies (three in each category) which was sent to a judging panel of independent industry experts, who picked a winner for each category.