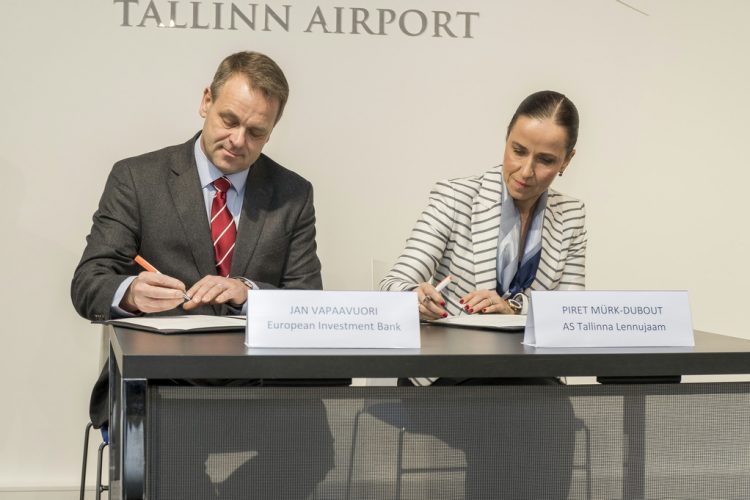 The EIB loan is guaranteed under the European Fund for Strategic Investments (EFSI), the heart of the Investment Plan for Europe.
The project comprises a number of investments at Tallinn Airport that are aimed at improving environmental and safety performance, alleviating current congestion and accommodating future growth in traffic. It includes the reconstruction of the existing runway and apron pavement, an extension and reconfiguration of the passenger terminal and the renewal and upgrade of the airside lighting system.

“The EIB has been cooperating with the Tallinn Airport since the late 1990s to support the airport’s development and growth as the main gateway to and from Estonia. Through the Investment Plan for Europe the EIB has more possibilities to support such strategically important infrastructure projects that might otherwise have challenges in obtaining financing for relatively large amounts and long maturities. In addition, the case of Tallinn Airport shows how EIB financing and EU funds can bring tangible benefits to citizens through improved airport facilities.”

EU Commissioner for Transport Violeta Bulc said: “Thanks to the Investment Plan for Europe, Tallinn Airport will be upgraded to reduce congestion and accommodate two million more passengers per year, while improving environmental and safety performance. This will facilitate economic development and create job opportunities, with long-term benefits for Estonia. It is very encouraging to see that Estonia is using the opportunities offered by the Investment Plan for Europe to develop its infrastructure and I hope to see more projects of this kind.”

Estonian Minister of Finance Sven Sester who witnessed the signing of the loan agreement highlighted: “Investments in infrastructure and better connections that support economic growth are also one of priorities of the new Estonian government.”

Smaller works included under the facility are the renewal and upgrade of maintenance, fire and rescue equipment and a range of other environmental related airside enhancements, such as the upgrade of the storm water drainage and de-icing network, a new snow dump area and an aircraft run-up area. The project will increase the handling capacity of the airport by approximately 1.2 million passengers per year.

The CEO of Tallinn Airport, Piret Mürk-Dubout, added: “Concluding the loan agreement with the EIB is a major milestone in funding the further development of Tallinn Airport and ensuring that we continue to provide quality services in a safe, efficient and environmentally sustainable manner. The EIB loan facility also acts as a certificate of excellence to demonstrate the financial stability of Tallinn Airport.”

In line with the objectives of the Investment Plan for Europe, under which this loan will be guaranteed by the European Commission, the project is expected to require about 540 person-years of employment during the construction phase. Further, some 50 permanent jobs will be created for running the facility once it will be operational and the strong economic rationale indicates that these jobs will be sustainable over the long term and that the project will contribute to increased productivity and hence economic growth.