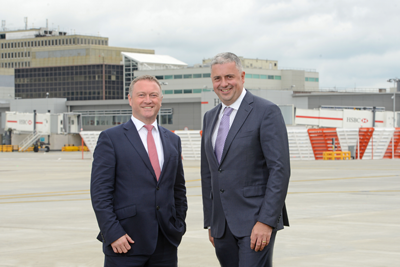 In one of the largest projects the airport has ever undertaken, the £186million facility houses a completely new baggage system for the South Terminal, as well as state-of-the-art passenger gate rooms with views across the runway.

The new ‘operationally excellent’ facility replaces the existing Pier 1 – originally opened by the Queen in 1958 – and now contains the airport’s first early bag store. The bag store allows up to 2600 bags to be checked up to 18 hours prior to departure – a feature that reduces queues by spreading out check-in times and is more convenient for passengers. Additionally, the identity and position of each item of baggage can be tracked at all times virtually eliminating lost baggage within the system.

Four new taxiways have also been constructed with dual boarding facilities, which reduces delays on the airfield as well as queues at passenger gates. Seven new lifts can carry a total of 214 people at any one time and the new passenger gate-rooms have seating for over a hundred people, including family areas and interactive spaces to keep children entertained as well as “Touchdown” business areas. Furthermore, premium passengers will be able to enjoy panoramic views across the airfield from the lounge that sits atop the new Pier 1.

Stewart Wingate, Gatwick CEO, said: “Our new Pier 1 supports Gatwick’s mission to become London’s airport of choice and helps the airport on its journey to become one of the most efficient in the world. These new state-of-the-art facilities make it easy for airlines to choose Gatwick as an operating base and means our passengers will enjoy even better customer service.”

“It is just this kind of efficiency that Gatwick would roll out en masse if we get the green light to expand.”

Croydon MP, Steve Reed, officially launched the new pier and said: “I’m delighted to open this fantastic new facility and celebrate the hard work and dedication that has gone into making it a reality. Gatwick plays a vital role across the region and expansion would help accelerate Croydon’s potential as the growth engine of South London.  I look forward to hearing a decision soon in favour of building a new runway.”

The Government has indicated it will make a decision this year on whether or not Gatwick airport should be expanded.