Opening of St Helena Airport delayed due to safety concerns

The opening of the remote £285m St Helena Airport has been delayed due to safety fears caused by difficult wind conditions. 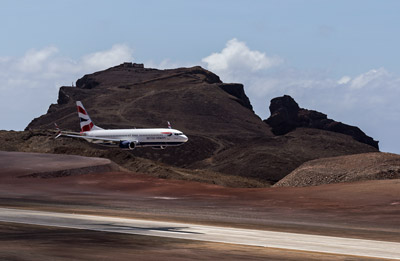 The opening of the remote £285m St Helena Airport has been delayed due to safety fears caused by difficult wind conditions. The British overseas territory of St Helena, located approximately 1,150 miles off the West African coast, was due to witness the opening of its first certified airport in May 2016 following a £285 million build, funded by the Department for International Development. However, in April 2016, the St Helena Government announced that further safety and operational work was required to address the impact of high winds conditions or “wind shear” when landing aircraft safely.

“The airport’s planned opening date in May 2016 has been postponed as outstanding safety concerns are addressed, potentially adding to the project’s cost and delaying its benefits.”

The first large passenger jet aircraft, a Boeing 737-800 (ZS-ZWG), touched down at St Helena’s new Airport on 19 April 2016 from OR Tambo International Airport in Johannesburg. Previously the island had only been accessible by a five day boat journey from the South African city. It is hoped commercial flights will help boost connectivity and tourism enabling the self-governing UK overseas territory to become less reliant on government subsidies, become self-sufficient and grow economically.

In November 2011, St Helena Government signed a Design, Build and Operate (DBO) contract with Basil Read (Pty) Ltd. The contract included £201.5 million for the design and construction of the airport, an additional amount – of up to – £10 million on shared risk contingency and £35.1 million for ten years of operation. All parties are now working to overcome the wind shear challenges identified by the first few flights into the Airport. According to St Helena Airport Project, this work will include the development of appropriate operational procedures needed to allow services to use the northern approach (Runway 20), as well as options for using the southern approach (Runway 02), where it says wind shear has not been identified.

In addition, the Royal Mail Ship (RMS) St Helena will continue to provide access to the Island as an interim measure and for a limited period until air services begin. Commenting on the report, Amyas Morse, Head of the National Audit Office said: “Estimating the likely costs and benefits of a project such as this is an inherently difficult task, particularly with a limited number of precedents for building an airport in a remote location. The year in which the Department stops paying an annual subsidy to the St Helena Government, as well as the total subsidy paid, will depend on whether the estimates of, for example, tourist numbers and how much they spend, are exceeded or missed.  The airport’s planned opening date in May 2016 has been postponed as outstanding safety concerns are addressed, potentially adding to the project’s cost and delaying its benefits.”

Despite recent reports, St Helena Airport is continuing operation with the safe arrival of an aero-med flight which assisted a medical emergency at the request of the St Helena Government on the 03 June 2016.

“Wind shear is a factor at several airports around the world, including London City Airport, where safe landings happen every day”

Commenting on the situation and the media coverage of the challenges, Governor Lisa Phillips said: “Press reports in the UK and elsewhere that describe St Helena Airport as being ‘scrapped’, ‘mothballed’ or ‘postponed indefinitely’ are incorrect.  The situation remains as in our last update.  This is that there are wind shear challenges on one runway (20, the northern approach) which means larger planes (eg. 737-800) cannot currently land safely.  We are collecting wind data which will allow larger planes to land on this runway, but this will take some time.

“Wind shear is a factor at several airports around the world, including London City Airport, where safe landings happen every day.

“In the meantime, we are working hard to identify an interim flight solution that can land on our second runway (02, from the south).  There is no wind shear on this second runway, but there is a tailwind.  We have identified aircraft types which can land in these conditions, and airlines that have such planes – and we are now exploring the specific availability of aircraft with these airlines.

“The Airport is certified and open, as demonstrated by the emergency medevac flight last Saturday when we were able to fly a sick baby to Cape Town.

“Naturally, we will keep the public informed … as we have been doing.”