Hamburg Airport reports that it has finished the 2015 financial year positively. Turnover for the year was €288.1 million… 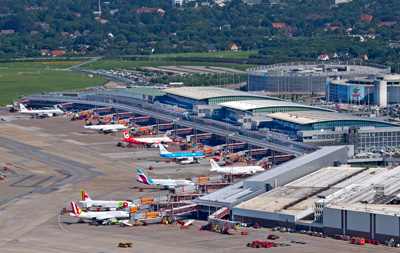 Hamburg Airport reports that it has finished the 2015 financial year positively. Commenting on the results, Michael Eggenschwiler, CEO of Hamburg Airport, said: “For Hamburg Airport, 2015 was an eventful year with gratifying commercial success. The airport’s entire workforce has achieved a great deal, and I am proud of the team spirit and commitment of our employees. Together, we have achieved a new passenger record and a strong result, at the same time further enhancing the service for our passengers with innovative ideas. We have also seen how important the airport is for the economic development of Hamburg. This will not change in 2016, as we offer a continually growing selection of airlines with various price and comfort models. We expect growth of around two percent for the current year.”

The airport’s investment volume in 2015 amounted to €50.7 million (-2.1 percent). The largest investment projects were the construction of the replacement Air Cargo Centreand preparatory work for the comprehensive renewal of Apron 1. These investments result in a 7.4 percent increase in the balance sheet total to €500.8 million (2014: €466.2 million).

Compared to the previous year, the number of passenger movements in 2015 rose by only 2.9 percent; in November it actually sunk by four percent, and in December it grew by just one percent. The number of take-offs and landings in 2015 (158,390) was lower than the number recorded in the year 2000. Back then, though, only around ten million passengers used Hamburg Airport.

Flown air freight rose by 7.4 percent to around 31,292 tonnes, whilst air freight shipped by road declined by 13.7 percent to 21,365 tonnes. Hamburg Airport explained the reasons behind this strong flown air freight result are the positive development of the Hamburg-Dubai route operated by Emirates, and the deployment of larger aircraft with more cargo capacity on the Hamburg-New York Newark route operated by United Airlines. Lufthansa Cargo’s road freight will return to Hamburg Airport when the new Hamburg Airport Cargo Centre opens in the second quarter of 2016.

A total of eleven new destinations are being served from Hamburg in the 2016 summer timetable. French airline ASL Airlines France is launching three new routes to Marseille, Lyon and Bordeaux. There are also more services from Hamburg to Eastern Europe. Both Blue Air and Tarom are flying to the Romanian capital, Bucharest, whilst Wizz Air is flying to Gdansk, Kiev and Skopje. Meanwhile, Air Serbia is launching operations to the Serbian capital, Belgrade. In addition, Eurowings has a new route to Cagliari, capital of Sardinia, and Germania is opening a service from Hamburg to Alanya, flying to the new, nearby airport of Gazipaşa. Both Germania and SunExpress are flying to the Turkish resort of Bodrum.

In addition to the new destinations, new airlines are adding services to seven successful existing routes. easyJet is expanding its network of routes from Hamburg by adding a service to Zurich. And in the summer timetable, easyJet is also adding two new summer holiday destinations: Pula in Istria County on Croatia’s Adriatic coast, and Olbia on the Italian island of Sardinia. Eurowings, too, is extending its European network with new services to Pisa and to the holiday island of Ibiza. The Irish carrier Ryanair is also extending its route network from Hamburg with a new service to Palma de Mallorca. SunExpress is adding a service from Hamburg to Varna on Bulgaria’s Black Sea coast.

Furthermore, the Belgian carrier VLM began flights to Friedrichshafen in February 2016. Due to insolvency, Intersky had cancelled its flights on this route at the end of 2015.  VLM is suspending its flight between Hamburg and Rotterdam. British Airways is taking over the service between Hamburg Airport and London City Airport from its Danish franchise partner, Sun-Air.

Michael Eggenschwiler points out that Hamburg Airport will be growing in 2016, too. The CEO expects an increase in passenger numbers of two percent for this year. “We expect stable demand, which will effectively consolidate the strong growth that we have seen in recent years. Hamburg Airport continues to be an important factor in setting the pace for northern Germany’s economy and a significant employer for Hamburg and the metropolitan region. Our environmental commitment means that, at the same time, we are also investing in sustainable development.”