According to reports an EgyptAir aircraft has been hijacked and forced to land at Larnaca airport in Cyprus during an internal flight between the Egyptian cities of Alexandria and Cairo. 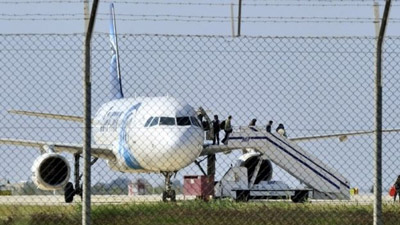 On Tuesday 29th March an EgyptAir aircraft was hijacked and forced to land at Larnaca airport in Cyprus during an internal flight between the Egyptian cities of Alexandria and Cairo. EgyptAir flight MS181 travelling from HBE Airport (Borg El- Arab Airport in Alexandria) to Cairo Airport was forcibly diverted to Larnica airport in Cyprus due to the aircraft being hijacked.  According to EgyptAir, the aircraft was an Airbus A320 with 56 passengers on-board in addition to 7 crew members and one security member.

Reports from BBC news suggest the hijacker wants to talk to his estranged wife in Cyprus.  However other sources suggest he is demanding the release of female prisoners in Egypt.  “The pilot said that a passenger told him he had an explosives vest and forced the plane to land in Larnaca,” indicated the Egyptian civil aviation ministry in a statement issued today, however this has not been confirmed.

Commenting on the incident, Cypriot President Nicos Anastasiades believes, “It is not something which has to do with terrorism” and confirmed “We are doing our utmost in order for everyone to be released and safe.”

EgyptAir has revealed negotiations are undergoing with the hijacker with reports suggesting the majority of passengers have now been released to safety leaving 3 foreign passengers, the pilot, co-pilot and 2 cabin crew members still on-board. Meanwhile, Flights out of Larnaka airport have been temporarily suspended and diverted to Pafos Airport.

Today’s incident follows the crash of a Russian passenger plane in the Sinai Peninsula in October 2015.

According to reports in the Guardian newspaper, the man who hijacked an EgyptAir plane flying between Alexandria and Cairo and ordered the pilot to divert to Larnaca in Cyprus has been arrested. The remaining passengers and crew were also seen leaving the plane with one man reportedly climbing out of the cockpit window.