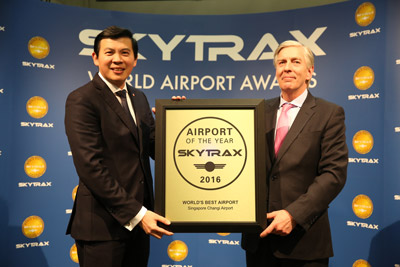 For the fourth consecutive year, Singapore Changi Airport has received the honour of being the World’s Best Airport as voted by air travellers in the 2016 World Airport Awards, held at Passenger Terminal EXPO in Cologne, Germany.

Changi Airport celebrated further success at the Awards, receiving the award for Best Airport in Asia, as well as the Best Airport for Leisure Amenities. These leisure amenities include music bar lounges, cinemas, music deck, swimming pool, napping and rest areas and the in-terminal Transit Hotel.

Commenting on the award win, Lee Seow Hiang, Chief Executive Officer of Changi Airport Group, said “To be named the World’s Best Airport by Skytrax for the fourth year running is a significant achievement for Changi Airport and a clear affirmation that we continue to hit the right notes in our pursuit of service excellence. We do not take this recognition for granted; it is the extraordinary effort and commitment of the entire airport community that drives Changi’s success. We thank our passengers and partners alike for their continued support and confidence in us.”

The Best Airports classified by Passenger numbers are: