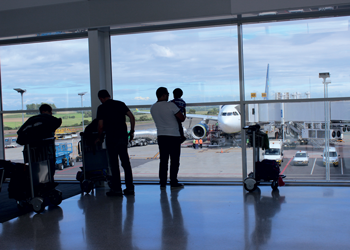 BEUMER Latinoamericana Equipamentos Ltda. (BLE) has been awarded a second Operation & Maintenance (O&M) contract for the baggage handling system at Viracopos International Airport, Brazil. The original 24 months O&M contract was awarded by Aeroportos Brasil Viracopos when BLE completed the supply, installation and commissioning of the baggage handling system in the airport’s new international terminal. The new contract extends the existing agreement and ensures that BLE will continue to operate and maintain the system for a total of 5 and a half years (66 months).

Viracopos’ baggage handling system in the new Terminal 1 consists of 72 check-in stations; 2200 meters of belt conveyors; 6 standard 60-metre baggage-reclaim carousels and an 80-metre carousel to handle high-capacity planes such as the Airbus A380. The system also integrates a fully automated LS-4000 tilt-tray sorter with the capacity to sort up to 4,400 items of baggage per hour.

The O&M contract allocates full responsibility for the operation and maintenance of the baggage handling system to BEUMER Latinoamericana Equipamentos. This includes monitoring and supervision of the system via SCADA; monitoring the baggage flow and resolving operational anomalies. “The new contract was awarded to BEUMER Latinoamericana Equipamentos due to the successful, error-free operation of the baggage handling system throughout its first year of operation and the close collaboration which has developed between BEUMER Latinoamericana Equipamentos and Viracopos Airport,” explains João Scharam, Maintenance Manager, Viracopos Airport.