Finavia has outlined its development programme for expanding Helsinki Airport. Continuing until 2020, the plans for increasing transfer traffic capacity will be based on a one roof concept in which also new services will be located in a single building. 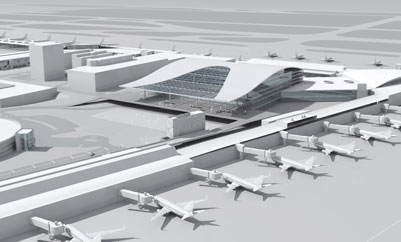 Finavia has outlined its development programme for expanding Helsinki Airport. Continuing until 2020, the plans for increasing transfer traffic capacity will be based on a one roof concept in which also new services will be located in a single building.

– This allows us to keep distances short and services easily accessible and provide a customer-friendly airport experience. This concept makes it easier to boost the number of transit passengers. Transferring from one gate to another will be easy and quick as it can be done in one terminal, explains Airport Director Ville Haapasaari.

According to Haapasaari, Finavia has been studying dozens of different scenarios for many years. The views and suggestions of airport users, such as airlines and other operators, have also been considered during the planning process.

Finavia selected a model in which the plan is to expand the existing terminal instead of building a separate satellite terminal, which was also an option at one point.

– Compared with the other models, the one roof concept is the best option in terms of operational efficiency and customer-friendliness. It is also an ecological solution because a single terminal reduces the need for services such as bus transport, Haapasaari adds.

In addition to the extension of the terminal, there will be more aircraft stands on the apron and additional de-icing capacity, in which the emphasis will be placed on environmental aspects. There will be more parking spots for both wide-bodied and narrow-bodied planes. Between 10 and 14 additional passenger bridges are planned.

The extension will proceed in three stages

First, Finavia will enlarge the facilities for long-haul passengers and increase the number of spots for wide-bodied aircraft for transit traffic. After that, transit capacity will be further increased and the service level for European and domestic flights improved.

Finally, Finavia intends to expand Terminal 2 to cover the ground traffic area so that the check-in, security control and baggage drop will all take place in one departure/arrival hall.

Expanding the facilities to the area in front of the terminal will allow Finavia to overhaul commercial services and the existing parking and public transport arrangements. There will already be improvements in place by next year: train services to the airport will start in July 2015.

The content, costs and timetable of the development programme will be specified as the planning progresses.

– The three stages of the development programme will be divided into smaller projects.   We will be able to react to changes in the market situation in a flexible manner. The programme will continue until 2020, Haapasaari notes.

One part of the development programme has already been completed: since May, departing passengers in Terminal 2 have been able to enjoy better services, while at the same time capacity in the terminal is now substantially higher.

Helsinki Airport is undergoing its largest ever service overhaul. All restaurant and cafe services will be upgraded and the shops will introduce international top brands. Helsinki Airport will have a total of 70 new or refurbished shops and cafes.

The apron will be enlarged so that the terminal can be expanded and the capacity of the aircraft stands increased. In early September, Finavia began the demolition of the old water tower and heating plant located on Apron 1 at the southern end of Terminal 2. The two facilities have been disused for years. Rock blasting in the area will begin in November – December.

Planning work and preparations will take most of the year 2015 to complete. Construction of the long-haul facilities and the additional spots for wide-bodied jets will start in 2016.

The Helsinki Airport development programme will continue until 2020

The development programme will total about 900 million euros and an estimated 10,000 person-years will be created at the airport during the construction. The expected increase of passengers to 20 million will generate 5,000 permanent jobs at the airport.