Located in the suburb of Mascot, Sydney, Australia’s busiest airport, served over 26 million passengers in 2010 and is a primary hub for the country’s major airline Qantas and a secondary hub for Virgin Australia and Jetstar Airways… 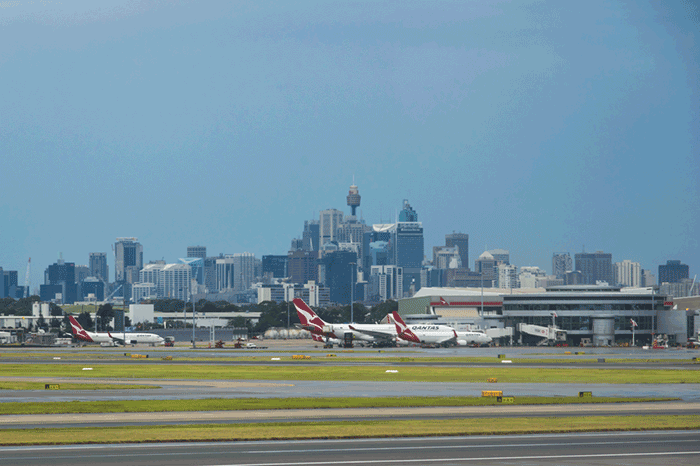 The airport has three main passenger terminals. Terminal 1, originally opened in 1970, replaced the old overseas passenger terminal and has been greatly expanded since. It is now known as the International terminal located at the airport’s north western sector and is made up of 30 gates and split into three levels serving arrivals, departures and airline offices.

Terminal 2 is located in the north eastern section of the airport, incorporating 14 parking bays, aerobridges and a number of non-contact bays. Terminal 3 is the airport’s domestic terminal, also located in the north-eastern section. Extensions were made to this terminal during the late 1990s. Here there are 14 parking bays served by aerobridges. The terminal is also home to a ‘heritage collection’, dedicated to Qantas, that showcases the airline’s 90 years of service. The freight terminal is located north of Terminal 1 and is used for international freight operations.

The airport lies next to Sydney’s Botany Bay and is made up of three runways known as ‘East-West’, ‘North-South’ and the ‘Third’. Last year the airport completed a $26 million runway resurfacing project which involved major maintenance work on the ‘North-South’ and ‘East-West’ runways as well as some taxiways. The work involved the following:

The importance of this runway re-surfacing project was underlined by the CEO of Sydney Airport, Kerrie Mather: “In line with our absolute commitment to safety, Sydney Airport will continue to invest in its airfield to provide the aeronautical infrastructure that Sydney needs.”

In total, the Sydney Airport Corporation Limited (SACL), the airport’s management company, will spend $51 million on runway safety upgrades, the sum also includes $25 million to be spent on installing stop bar lights. The lights will be installed at the taxiway entries to the airport’s three runways, and will ultimately prevent aircraft from inadvertently entering a runway without Air Traffic Control clearance.

As well as an ongoing commitment to safety within all of its airport operations, the airport continues to work closely with its airlines. This relationship was cemented towards the end of 2011 when a proposal was offered that would integrate international, domestic and regional services through a two airline alliance with Qantas and Jetstar. If committed to by all parties, the vision could be realised by 2019 and without change to existing operating restrictions.

At the core of the proposal is the potential to improve traffic flow around the airport as well as allowing more scope for future terminal expansion, making better use of the airport’s existing facilities and creating more aircraft gates and parking. Of course, the concept will require detailed design and analysis and negotiations with commercial parties. Kerrie Mather welcomes the discussions: “This initiative has the potential to transform aviation in New South Wales. First it would improve Sydney Airport’s attractiveness as a global hub and deliver a better passenger experience every day. Second, as Sydney Airport invests in its future it would bring with it growth in tourism and business travel which would lead to job creation and contribute to New South Wales’ economic prosperity.”

Qantas Chief Executive Officer Alan Joyce feels that the alliance would help the airport overcome some of its challenges as well as responding to the opportunities that the initiative will allow. “The proposed new terminal precinct would have significant benefits for all passengers travelling with both Qantas and Jetstar,” Mr Joyce said. “As passenger numbers grow over the next decade, it is vital that airlines and airports work closely together to deliver a seamless travel experience.”

It is a refreshing partnership that underlines the major need for both airlines and airports to complement one another’s operations; ultimately one cannot do without the other so Sydney’s novel approach to all of its airlines shows a positive reaction to the rapidly changing aviation environment.

Under the proposal it is envisaged that the domestic terminals, Terminal 2 and Terminal 3, will accommodate the Qantas Group, including Jetstar. Terminal 1 would accommodate Virgin Australia and its international partners. The proposal also incorporates the construction of a new Qantas engineering complex for line maintenance that will support the airline’s current and future fleet and a new Virgin Australia hangar for wide and narrow-body aircraft that will serve as a dedicated maintenance base in Sydney.

In line with the Airport’s 2009 Master Plan – which shows the vision for the operation and development of the airport to the year 2029 and the strategies required to meet the city’s air transport needs – the airport is currently involved with broader stakeholder proposals with all airline partners, airport related businesses, border agencies, regulatory authorities, local, state and federal governments and the community, before making any decisions to formally proceed with this proposal.

In 2000, Sydney hosted an extremely successful Olympic Games. The gateway to this event was of course Sydney Airport, which had to cope with the worldwide influx of passengers as well as the unusual items and luggage that the event encompasses. Leading up to the games Sydney undertook a major BHS project known as SA2000 with the goal of constructing or upgrading the necessary infrastructure and inline screening capability required to meet this Olympic demand. Part of this project involved the augmentation of the BHS so that the capacity increased by about 60 per cent.

BCS Airport Systems, an Australian based BHS specialist within the BCS Group, played a major role within this programme, providing all low level controls and integration between the conveyors and x-ray machines. This integration is critical and the tracking of cleared and uncleared bags vital to the success of the baggage system’s screening and sortation accuracy.

Over the course of the games the system had to ride a number of logistical challenges including; the requirement to handle oversized and bulky equipment and the ability to cater for large groups with a high volume of bags and equipment.

It is obvious that the growth of IT has influenced all aspects of airport operations over the last decade, particularly within the field of baggage handling, often at considerable expense. Sydney is rather unique as it has successfully maintained the same sortation software, controller hardware and user interface for the past 10 years, however the majority of the system’s barcode scanners have been replaced or upgraded within this period to later generation bar code scanners. Latest BHS technology is heading towards the integration of RFID (Radio Frequency Identification), which utilises the use of a smart chip tag rather than the usual baggage bar code tag. Sydney’s relationship with its airline partners is once again cemented in this area; as they work together to achieve mutually beneficial improvements within BHS.

With continued reference to the Airport’s 2009 Master Plan and strong Government and stakeholder support, Sydney is in a strong position to grow and to successfully serve Australia as the country’s busiest airport.

My thanks to David Jerram, General Manager at BCS Australasia and the Sydney Airport Corporation Limited for providing invaluable input to this article.

IATA One ID: A deep dive into the interoperability challenge

Is blockchain the solution to enhancing baggage tracking?