How drones and artificial intelligence can be used together

They went mainstream only a few years ago, but drones are already making a big splash in the market. Thanks to the ability to buy them off of a shelf, drones are being adapted for commercial use. There are only so many human controllers can do though and, future drone models may not see this limitation thanks to the use of AI, freelance blogger Jake Carter tells us more. 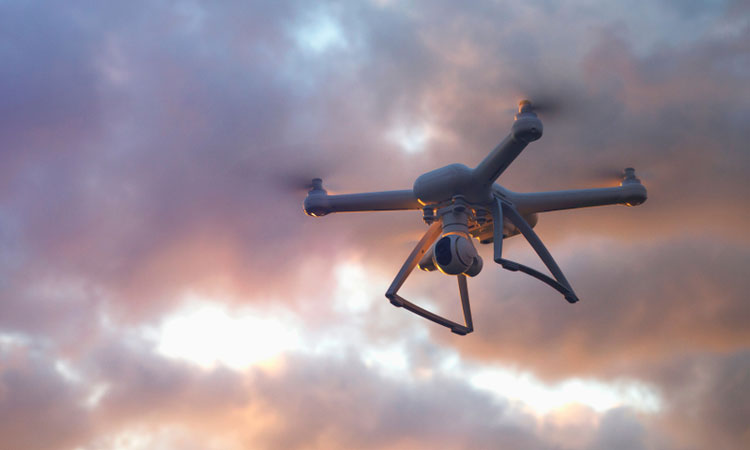 Artificial Intelligence, or AI, has existed for some time now. If we could develop an AI that could operate drones without humans, what could this mean? What sort of new opportunities could come from the melding of AI with drone technology? Moreover, what could go wrong?

Thanks to the eye in the sky nature their cameras afford them, drones are an excellent way to get a birds-eye view of the land. Drone enthusiasts are already using this to get fantastic views of landscapes, which means that they can be used for things such as land surveillance and mapping, but they can go beyond such uses into realms like construction.

In March 2018, Chinese manufacturer DJI announced its most massive shipment of commercial drones. One thousand drones designed by U.S. drone company Skycatch were sold to Japanese construction company Komatsu. Each of these drones contains software designed by Skycatch that allows them run with minimal human interaction.

The drones in question are the model Skycatch Explore1. Equipped with Skycatch’s software, the drone can create maps with accuracy within five centimetres. What’s more, the base station, Edge1, can process images without the need for Wi-Fi. The most impressive feature, though, is its own set of algorithms that can identify basic materials on a construction site, and take stock of how much is left.

What this means is that construction projects become more efficient. In a video demo for the Explore1, the drone was able to identify a potential design flaw in a construction site. This saved the site time and money that would have gone to correct the defect.

The Komatsu order is only one example of Skycatch’s increased popularity; their drones have already been used in sites around the world. Skycatch CEO Christian Sanz says, though, that the massive order shows that the industry’s growing: “Automation in construction is no longer something to look out for, four or five years in the future. When you go to a job site you should expect to see robots on the ground.”

Komatsu’s order of the Skycatch Drones is the culmination of a year-old partnership. Lately, with the labour shortage in Japan, they have set up a service called Smart Construction which uses robotic vehicles to complete the work, but they were not helpful. Chikashi Shike, a member of the Smart Construction Division in Komatsu, said: “Because the terrain survey could not be conducted with high accuracy, what results in many sites is a 20 to 30 per cent margin of error in soil volume after the construction is complete.” Drones would make this process more likely to succeed. They’ll provide aerial mapping, updated in real time, that the vehicles can use to inform their work. This results in a higher accuracy count of soil and cement used in the site.

Consequently, the time it takes to map a site entirety will go from weeks to less than a day. This means Komatsu will require fewer workers, solving the labour problem on home turf. They would only need a few people on hand if something were to go wrong with the AI.

In densely populated areas it can be hard to track potential violent acts with standard surveillance cameras; in a paper published in June 2018, a team of researchers proposed a possible solution, they would use AI-controlled drones to identify violent behaviour in large groups.

Titled ‘Eye in the Sky’, researchers used a Parrot AR quadcopter to live stream footage through the internet. AI then uses an algorithm to estimate human poses and match them to what the team designates as ‘violent’. The hope is that this can then be used in public areas and large-scale events to detect crimes.

While all this sounds impressive, the accuracy for this is questionable. First, lead researcher Amarjot Singh notes that the more people are on camera, the less accurate the AI is at identifying potential violent situations. With the changeability of crowded places and the dynamics of public areas this is not a good sign.

A second issue is that all the footage used got staged by volunteers. An article on The Verge about the project noted that “in order to train and test their AI, the researchers recorded their own video clips of volunteers pretending to attack one another. The volunteers are generously spaced apart and attack one another with exaggerated movements”.

It should be notable that controlled tests and real life situations are two different things. In real life, crowds can be massive, and people’s gestures are not as exaggerated. Also, there is the concern the drone could mistake certain actions, like a high-five, may be misconstrued as violence. Singh and his team are yet to prove that their technology will not make these mistakes.

There are also ethical concerns about using this kind of surveillance. People fear that this kind of surveillance system can lead to abuse by governments and law enforcement. Despite this, Singh says his work intends to stop crimes and acts of violence and to have a positive impact. He has simply commented: “Anything can be used for good. Anything can be used for bad.”

There are a lot of potential ways that AI will become integrated with drone technology. Some of these ways can help make work easier, and may even be able to save lives if it is developed to the fullest extent. As long we are smart about using AI, this will help mankind far more than it could hinder us.