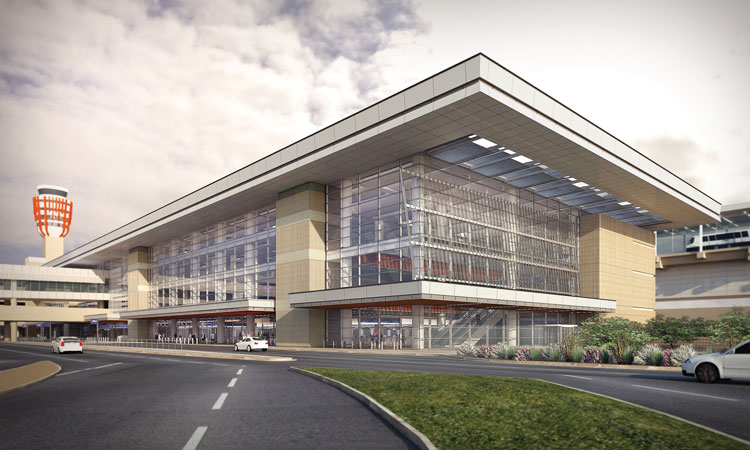 Modern. Inviting. Functional. This is what travellers will experience when they enter the modernised Terminal 3 at Phoenix Sky Harbor International Airport. As air travel grows so does the demand by customers for increased efficiency, better facilities, and more choice when it comes to retail and dining. Airports are now considered to be an important part of the journey, and the passenger experience they provide is critical. To meet the demands of discerning travellers, America’s Friendliest Airport® has embarked upon an extensive modernisation of its Terminal 3. Once complete, the modernised terminal will enhance the customer experience by providing a more efficient way to move through the terminal and a modern space to enrich the overall travel experience.

“Phoenix Sky Harbor is a competitive link to the global aviation market,” says Director of Aviation Services Jim Bennett. “We are the largest economic engine in the state of Arizona. It is critical that we not only continue to deliver world-class service to our customers, but that we have the infrastructure and state-of-the-art facilities to continue to grow our market and provide an efficient experience that meets our customers’ travel needs.”

Terminal 3, which currently serves Delta, Frontier, Hawaiian and JetBlue airlines, opened in 1979 with 880,000 square-feet of space and two concourses with 15 gates. It was state-of-the-art for its time and initially served seven million passengers. In 1997 the lobby area was upgraded to add additional concessions and shops. As passenger traffic has grown at Phoenix Sky Harbor, and travellers’ needs have changed, it was determined that the terminal needed a revitalisation and improvement to the infrastructure.

The project will be completed in three phases through 2020 to minimise disruption to customers and airport operations. Each phase will feature new elements to greatly enhance the passenger experience.

Convenience and efficiency are on the way

The first phase or component, scheduled to open in autumn 2016, consists of adding a new, consolidated security checkpoint and upgrading the airline ticket counters. The new security checkpoint will be the most noticeable difference to the passenger experience in this first phase. It will initially have six lanes, but will later be increased to 10-12 lanes. The terminal previously had two checkpoints – one for the north concourse and one for the south concourse. The south concourse was closed in the spring of 2015 as work began on the terminal.

“The consolidated checkpoint will make getting through security easier,” explains Special Projects Administrator, Art Fairbanks. “The checkpoint will handle passenger flow more efficiently, and is being developed in such a way that it can accommodate an influx in passengers, especially during special events like the Super Bowl, the National Collegiate Athletic Association’s (NCAA) Final Four College Basketball Games and College Football National Championship games.”

Having one large checkpoint will give customers flexibility. After going through the security checkpoint, travellers will find a large, open recomposure area with seating. After gathering their belongings, travellers will ascend an escalator and be greeted with a myriad of shops and dining options. This improves the passenger experience, as previously travellers only had the retail and dining choices available to them on either the North or South concourse.

In addition to the new security checkpoint, an enlarged ticket counter space will use technology to streamline processes to make the entire check-in experience more convenient. Outside the terminal, enhancements are being made to the curbs to allow more space for pedestrians. The PHX Sky Train® Terminal 3 Station, which opened in December 2014, will provide an easy connection for travellers connecting from local public transportation, Economy Parking or Terminal 4 – Phoenix Sky Harbor’s busiest. After disembarking from the train, travellers will head down an escalator to arrive at the security checkpoint, making it a very efficient arrival process at the terminal.

Convenience and efficiency aren’t all that the modernisation efforts will bring to Terminal 3. In fact, passengers will find the revamped terminal to be a more inviting experience. The block walls of the original building have been removed to make way for glass and skylights. Passengers inside will find bright, natural lighting and beautiful views of the Phoenix landscape and downtown city skyline. Prior to going through the security checkpoint, a large open space with expansive windows and seating will be available for travellers and those meeting arriving passengers. Customers will be able to enjoy a meal or a drink while gazing at the city lights or stunning views of the surrounding mountains.

“We really are taking advantage of all of Arizona’s sunlight to provide our customers with an open and welcoming feel to the terminal,” Fairbanks says. “The terminal’s exterior will project a more updated, modern look that our community can feel proud of.”

The terminal will also feature Amenity Zones, complete with seating and conveniences such as vending machines, ATMs and courtesy phones. The architectural features and signage will make these zones easy to spot. Gate hold areas will also feature ample charging stations so travellers can plug in before they board their flights.

Additionally a Museum Gallery, as well as exhibition cases, will open in the first phase to provide passengers with a unique look into Arizona’s culture and history. The new exhibition spaces will be part of Phoenix Sky Harbor’s Airport Museum Program – one of the country’s largest with nearly 900 pieces in its collection and featuring exhibitions in all terminals and at the consolidated Rental Car Center. Later, an outdoor sculpture garden with desert landscaping will give travellers a chance to enjoy fresh air and sunny skies outside the terminal with ample seating.

“The goal is to provide our customers with a superior travel experience,” Bennett reveals. “Whether you are a business or leisure traveller, our state-of-the-art facility will provide you with the conveniences you need and the extras you desire.”

America’s Friendliest Airport® already features amenities including five pet parks, nursing rooms, charging stations, and children’s play areas. All of these features will remain in the modernised Terminal 3. In fact, passengers will find a nursing room for mothers and a pet relief area post-security.

“We think passengers are really going to like this new, modernised terminal,” Fairbanks says. “Our South concourse will be a bright and welcoming space, especially with the soft and diffused lighting throughout. We will use intuitive way-finding with higher ceilings along vertical and horizontal routes, as well as carpet and lighting to guide travellers to circulation paths. This will aid in the flow of passenger traffic throughout the terminal.”

The final component will include improvements to the North concourse, including new food and beverage outlets as well as new retailers and other amenities. In fact, it is anticipated that Terminal 3 will rival Terminal 4 for retail and concessions offerings.

“Terminal 4 has become an award-winning destination itself, and we anticipate Terminal 3 will offer a similar mix of local, regional and national dining and retail options,” Bennett says.

In addition to enhanced convenience and efficiency for the passenger, this project also provides environmental benefits. In the first phase of the Terminal 3 modernisation, 81% of the construction waste has been diverted from the landfill. The project is committed to becoming a Leadership in Energy and Environmental Design (LEED) silver certified building.

“This project is using more recycling and locally produced products,” Fairbanks explains. “We are installing energy efficient equipment and plumbing that reduces the amount of water used. The use of natural light will also reduce our energy consumption.”

When complete, Sky Harbor’s Terminal 2 will close and all operations will be consolidated into the new, modern Terminal 3. Terminal 3’s gate space will be increased from 16 to 25.

“This project provides us with a great opportunity to consolidate operations in a modern terminal which will not only better serve our passengers, but will also create a more efficient terminal for our airline partners,” Bennett says.

The total cost of the project is approximately $590 million. No tax dollars have or will be used to fund the project – it is financed through airport revenues such as parking, concessions and tenant fees.

Heather Lissner is the Public Information Manager for the City of Phoenix Aviation Department, which includes Phoenix Sky Harbor International Airport and two general aviation airports, Phoenix Deer Valley and Phoenix Goodyear. Heather is responsible for overseeing media relations, the department’s websites, social media, video production and printed material. With more than 14 years of experience in the public relations industry, Heather has worked in the Aviation Department since 2007. Her previous work includes corporate communications for a financial services company and an airline. She holds a bachelor’s degree in telecommunications and history from Indiana University, a master’s certificate in public management from Northern Arizona University, and a master’s degree in communications from the Johns Hopkins University.