The volcanic ash cloud over Europe was one of the biggest news stories of 2010. For the air traffic control industry, it also meant an unprecedented length of time under the media spotlight… 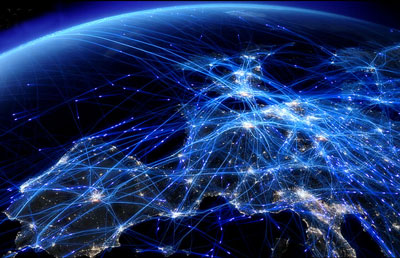 In airspace which normally sees 26,000 flights a day carrying 700,000 passengers, the first six days of the continuing eruption and the combination of unseasonal winds grounded all but a fraction of the scheduled commercial services, leaving tens of thousands of travellers stranded and airports stilled.

This meteorological phenomenon ensured the mainstream media trained their focus on a sector of aviation that is largely unsung and unremarked in day-to-day news coverage.

Normally – unless, of course, there is a system failure or outage which results in delayed aircraft and passengers – air navigation service provision is, literally, invisible infrastructure simply carrying out its job.

Now, mainstream journalists wanted to find out more about air traffic control and, in particular, how it interacted across Europe.

The phrase Single European Sky (SES) was now being widely reported. The media relations team at NATS were being asked what it meant. Eurocontrol, which staged a number of news conferences throughout the crisis, found themselves taking the time to explain what SES would mean in terms of co-ordinated design, management and regulation of airspace within a unified network. I suspect it was the first time this discussion had been subject to such a wide audience.

But it’s precisely the audience they serve – the travelling public – which does stand to benefit from the project to make Single European Sky a reality. They will now have a glimpse of the effort to modernise and streamline some of the world’s busiest airspace to enhance safety, improve efficiency and capacity while reducing the environmental impact of aviation.

First, the new targets to improve performance, starting January 2012. For the first time all European air navigation service providers – ANSPs as we are known – will be set targets by their regulators in the key areas of safety, costs, delays and the environment. All to deliver improved performance at EU level.

NATS fully supports this initiative. We have been subject to UK regulation for the last decade and so are familiar with the notion of incentivised targets. Properly designed, regulatory targets can provide a useful framework to encourage better performance. And it is sensible that this applies across the EU so all ANSPs have to take similar steps.

Second, SESAR (Single European Sky ATM Research) – the EU project to design the future pan-European air traffic management tools and technology. SESAR is split into three phases. From 2004 to 2008 was the definition phase. 2008 to 2012 is the development stage with 2013 to 2020 seeing the phased deployment of the tools, procedures and operations which will effect the transformation required to enhance safety, reduce the cost of air traffic service provision, to reduce the environmental impact and to increase capacity.

SESAR has 16 founding partners including airports, system providers and Eurocontrol. NATS is one of six ANSPs which have joined together to achieve the SESAR goals. The others are DFS (Germany), AENA (Spain), DSNA (France), ENAV (Italy) and NORACON (Northern Europe and Austria).

NATS is leading the terminal manoeuvre area (TMA) work package because of its expertise in sequencing aircraft for approach, departure and overflight in some of the world’s most complex and busiest airspace; the London Terminal Manoeuvre Area, which covers the airspace sitting above Heathrow, Gatwick, London City, Stansted and Luton airports.

For the first time, SESAR holds the promise that airlines will be able to fly the ‘business trajectory’: the most direct route between destinations. The technology will also bring to life the 4-D concept: for the first time, the exact position of an aircraft during its journey will be visible in control systems that are seamless in their connection with each other across national boundaries.

System Wide Information Management (SWIM) is one of the key concepts around which SESAR is based – that of a fully integrated technological network into which each air traffic partner is plugged into. However, many separate projects and work packages are underway in a research programme costing some €2 billion. The research projects are just the start. Implementing it effectively and efficiently will be a big challenge for the deployment stage.

NATS is already working on some key elements. For example, in Airport Collaborative Decision Making (A-CDM), we have a tool which is SESAR-compliant and is an entry-level technology for SESAR. A-CDM pulls into one screen, either handheld or laptop, all the information from each of the different players in an airfield operation. In doing so, it allows managers to make more considered decisions for push-back, departure and waiting times.

As a result, aircraft are only started when they have a logical place in the departure queue, effectively queuing on stand, which reduces engine run-time and its associated emissions and fuel burn. Not only does this reduce the environmental impact but less fuel burned equals money saved for airline operators – which is why the software is in use at both Heathrow and Gatwick airports.

Technology is crucial. However its benefits will not be realised without partnership. We need partnership to overcome inevitable obstacles and achieve an optimised network over Europe. Facilitating this partnership will be a key role of the new European Network Manager, expected to be nominated in 2011.

The third key element of the SES project are the Functional Airspace Blocks (FABs). A FAB is, quite simply, an airspace block based on operational requirements rather than national boundaries. Two FABs are already established with a further seven under development. The aim is to maximise the efficient use of the jointly managed airspace for the benefit of airspace users.

NATS and the Irish Aviation Authority put into place the first operational FAB in 2008. The UK/Irish FAB has already created a route-free block of upper airspace which allows airlines to find their optimum flight paths. In 2009, this alone generated savings of almost 15,000 tons of fuel and 47,000 tons of CO2. In addition, the FAB has implemented night time fuel saving routes, which save an additional 5,500 tons of fuel – that’s 18,000 tons of CO2 – each year. It is estimated that total benefits in terms of reduced fuel and CO2 will amount to €35 million by 2013.

It is clear that if we are to achieve the aims of the SES project in terms of greater efficiency, enhanced safety and reduced impact on the environment, the key European aviation stakeholders need to work together. Our airspace and systems are interdependent. This was vividly illustrated by the ash crisis but is repeated regularly when there are major disruptions.

From volcanic eruptions to snow to industrial action, these episodes serve as a timely reminder that the airspace above us is as vital for travel and trade as the visible airport and airline infrastructure which the travelling public see every day.

The European Commission knows this and has asked our Chief Executive, Richard Deakin, to help set the course for the development of air transport across Europe.

EC Vice-President Siim Kallas invited Richard to be part of the 15-strong Aviation Platform to advise the Commission on how best to ensure the European aviation industry remains competitive and has a sustainable future.

I believe Richard’s words aptly sum up the challenge lying ahead. He said: “Air traffic control is a unifying factor in a fiercely competitive industry. We are the touch point for airlines, airports and manufacturers; “We need to shift our thinking in air traffic management from nation-centred to Europe-wide systems and tools. It’s vital that the 21st century ATM network serves each airline, airport and passengers safely, efficiently and sustainably. This is a great opportunity to ensure we have an overview which can influence the fundamental work going on to transform operations across the EU.”

Air navigation service providers both civil and military, manufacturers, airlines and airports together with regulators and states are involved in the programme to redraw the skies. The question always being asked is: will it work? The answer is that it has to.

Anne Lambert is the first Director, European and Government Affairs for NATS. She is responsible for developing strategies to engage both UK and European stakeholders in delivering ATM solutions which meet airline needs. Anne has 30 years’ experience in the UK Civil Service with particular expertise in regulation and in EU affairs. She has held senior positions with the DTI, OFTEL and two postings with the Foreign and Commonwealth Office (FCO) in Brussels. Her most recent position of UK Deputy Permanent Representative to the European Union in Brussels included responsibility for aviation.