Addressing the needs of everyone

New entrants into the US National Airspace System (NAS) are about more than unmanned aircraft systems (UAS). In addition to traditional drones, rockets and balloons (such as Google’s Project Loon) are competing for airspace at both low and high altitudes. Integrating these new entrants into the NAS is no easy task. Air Traffic Control Association (ATCA) President and CEO Peter Dumont offers some insight.

UAS/ROCKET technology is pushing regulators more than any aviation innovation that we have ever seen. These new entrants are incredibly disruptive to all NAS users, including airports. Their integration into the NAS is the most difficult that we’ve ever attempted. The NAS was initially developed to serve a pilot or manned vehicle. In a perfect world, we’d undergo a complete NAS redesign, but that is not an option at this point. We can’t stop NAS operations to figure this out. We need to find a solution that incorporates the needs of industry, government (federal, state, and local), corporate users, and hobbyists within the current airspace structure…

The Federal Aviation Administration’s (FAA) Small UAS Rule, 14 CFR Part 107, which went into effect in August 2016, was an important first step towards regulating use of UAS under 55 pounds. While it was a boon for all UAS users, especially hobbyists, it was just the beginning of integration and in some cases, raised more questions. How much should federal regulations apply to state laws? As it stands now, state and local governments can’t enforce additional registration requirements and airspace regulations on UAS operations without the FAA’s approval.

Should that change going forward? Answering that question is a major goal of the FAA’s Drone Advisory Committee (DAC) – a community of stakeholders that consists of technology innovators and business leaders – and state and local government officials – who have a different knowledge base than traditional aviation users. I serve on the DAC subcommittee and we discuss federal v. state and local UAS regulations at length at every meeting. If multiple state and local governments try to require different UAS regulations, it could lead to a fractured airspace system and raise many safety as well as enforcement concerns. A major goal of modernising the NAS is increasing the efficiency of air traffic and this could undo some of that progress. The safety of our airspace – our industry’s number one commodity – is at stake. It’s important that we get this right.

Through the DAC, the government has allowed stakeholders to be a part of its policy discussions, which is a great step towards successful integration. It helps ensure solutions address everyone’s needs. It’s essential that all the needs of all stakeholders are incorporated so they are invested in the regulations. While some might argue that regulating airspace is more a job for lawyers, I think an integration plan should be developed by those who understand the system.

ATCA is also working with NASA as they research the development of a UAS Traffic Management (UTM) system. NASA and FAA are working together with all users on an unprecedented level to support that effort and we are grateful to be a part of that.

Much like the DAC provides a venue to facilitate UAS integration into the NAS, ATCA creates a forum to discuss major issues affecting our industry through events such as ATCA Annual in the autumn and World ATM Congress in Madrid, every spring. Integrating new entrants into the NAS was a major discussion topic at the ATCA Annual event in National Harbor, Maryland, in October 2017.

As ATCA President and CEO, PETER F. DUMONT serves a membership of nearly 3,500 in all segments of the ATC/ATM community. Peter represents ATCA on RTCA’s NextGen Advisory Committee (NAC) and its Drone Advisory Committee Working Subcommittee, and sits on the Policy Board of the U.S. Contract Tower Association (USCTA). 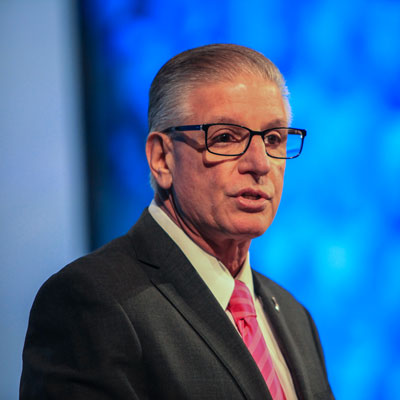