Circular runway exclusive: The reality behind the revolutionary project 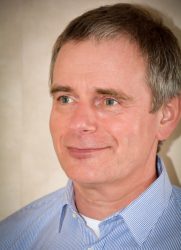 Will the circular runway ever truly take off? Might circular runways solve aviation’s environmental challenges? ‘The Endless Runway‘ project, led by a team of Dutch scientists from the Netherlands Aerospace Centre (NLR) essentially presents the space-saving, emission-reducing concept of a circular runway best articulated in image form as you can see. The project and idea is undoubtedly revolutionary and to find out more International Airport Review spoke exclusively to Senior R&D Manager Henk Hesselink for a behind-the-scenes insight.

1. The ‘Endless Runway’ project sounds extremely ambitious… what is it?

The Endless Runway is a radical idea for a new concept of operating a runway that affects the operations and construction of the whole airport.

NLR led a consortium of research centres that investigated the idea of a circular runway. The work has been carried out with partners in The Netherlands, Germany, France, Spain and Poland. The work was partly funded by the Framework 7 programme of the European Commission. The European Commission recognises that mobility will be stressed the next decades and that new breaking technology will be necessary. 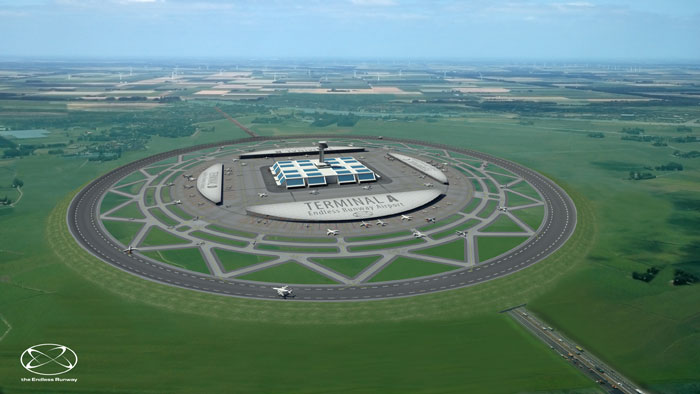 This runway is a circle, that has no limitations on where to take-off or land on this circle. This makes it possible to fly in from or out to any direction. The size of the circle is pretty large, its diameter is 3.5 kilometres. Total length of the runway therefore is 10 km. This means that passengers during take-off or landing will not feel like they are in a roller coaster, a maximum of 1.2g forces will be experienced, similar to a train on a curved track. A typical landing only requires a part of the runway with a limited curve.

Current airports operate runways with fixed directions, so a limited number of directions is available for take-off and landing. During a storm, the capacity of the runway is limited because of this. This fixed direction also means that some communities experience more noise than others.

At the Endless Runway, aircraft have the possibility to land anywhere on the circle. This gives the possibility to find always at least one point where there is no crosswind and only headwind. This means that the airport can operate a sustainable capacity.

2. In light of the very exciting announcements that the circular runway might solve several issues, how would it physically work?

The aircraft will take-off at the point where there is no crosswind. In limited wind conditions, aircraft can take-off and land anywhere on the circle. This makes it possible that an optimum point can be chosen, based on the origin of the landing aircraft or destination when taking off.

The runway is banked. Starting from the inner part of the circle on a flat surface, the bank angle will gradually increase to the outside. Because of the centrifugal forces a starting aircraft at the middle of the circle will move to the outer part until taking off.

The project is an innovative project that aims at solutions beyond 2050.

A landing aircraft will need to land at the part of the slope depending on its speed and will gradually move down when slowing down. If the aircraft lands too high, the shape of the runway will force it to go down quickly until the right path is found. The other way around, the aircraft will be forced to the outside if it lands too low. We calculated that the runway must be extended up to a width of 140 meters to allow this as a safe operation. Flight tests have been performed in the 1960s using military aircraft, where pilots reported that the runway was easy to use and the bank angle made them move to the right path quickly (It must be mentioned that the first landings were more uncertain for the pilots, but quickly they started to get accustomed to the curved track.

3. What are the precise benefits?

The capacity of an airport with an Endless Runway is at least similar to that of a conventional airport with four runways, while the length of the circular runway is comparable to three. This makes it possible to use the runway with several aircraft simultaneously.

Flight times in the area around the airport will be reduced as aircraft can now almost fly straight in and out. Having said this, it will be possible to avoid large communities. We will be able to design routes that avoid the areas where most people live. Or we can design routes such that everyone around the airfield will experience a similar level of noise. Agreements can be made.

4. Are there any obstacles to the project – challenges that you might face?

Costs for constructing the airport will be higher than currently. The amount of concrete necessary will be larger than for normal runways as the width is larger. Besides, the construction will be more complex because of the bank angle. We estimated the airport to be about 1.5 times the costs of a conventional.

Using flight trials, we will be able to control circumstances

Major challenges are the safety aspects. Up to now, we have taken safety as a basis for all our simulations and calculations. Most responses I receive however concern the safety. As NLR we always demand safety at the highest level and we need to take a step-by-step approach to keep ensuring that the operation remains safe. In follow on steps, with flight trials we will further investigate all possible safety aspects. Using flight trials, we will be able to control circumstances and further test all safety issues.

5. What is the current situation regarding development on the project?

Within the project, we have designed a concept, procedures and we made a design for the airport. We have performed simulations, using a PC-based flight simulator and we used an air traffic control simulator to find out where we need to adapt current operations and procedures and what new developments will be necessary. We checked the take-off and landing under the most constrained situations with a B747 simulation.

An Endless Runway is at least similar to that of a conventional airport with four runways.

We also designed an aircraft that would be optimised for use of the Endless Runway, based on future aircraft developments. We also carried out simulations in an ATC simulation where, again, we took a very constrained situation: we considered the busiest day of the year at Paris CDG airport to find out if is possible to handle all traffic on the circular runway. This was possible. It will be necessary to construct new controller assistance tools for planning traffic that comes from and flies out in all directions. We made a first design for such planning tools.

6. When is the realistic first date for the first circular runway you hope?

The project is an innovative project that aims at solutions beyond 2050. But with all attention that we receive now, I do hope that the topic is taken up at faster pace. It will certainly take many years, but my optimistic guess would be in about 20 years.

We want to give the current PC-simulations a follow on with performing flight trials. Using drones on an existing curved track, like a car test track, will allow fast and safe possibilities for testing.

We receive a lot of attention with the publication of the Endless Runway video and we will take the responses that we receive seriously. Many people question the behaviour of the aircraft in approach to the circular runway. This is exactly what we want to address in a follow on study. Up to now, we have address all issues, including safety matters, in a simulation environment. We have received a lot of results and all design decisions have been taken based on the results of the simulations.

Watch the video here courtesy of the BBC.

The next step will be to perform actual flight tests. First for the standard behaviour of the aircraft on the Endless Runway during take-off and landing. We need to perform several flights to test many different operational circumstances. Specifically under different weather conditions. Next to this we want to test emergency procedures. In a controlled environment with pre-planned situations, we will be able to perform all kinds of emergencies during each phase of flight.

Many people question the behaviour of the aircraft in approach to the circular runway.

We envisage that these tests can be performed using drones. Not with the small quadcopters, but large fixed wing drones (up to e.g. 300 kg.). These drones can be tested at existing circular tracks, like test tracks for cars.

After these tests, we can perform manned flights and after this, it will be good to develop real runways, exactly as we have calculated them to be in the study and based on the flight trials. We keep developing the runway, always keeping safety in mind. And once the runways have been tested, we can start operational tests with real runways and real airports. This will take a time frame of several decades; as mentioned before, the study of the Endless Runway was for the year 2050 and beyond.

With these steps, we will be able to bring the research to the next test level and finally the operational level.

What do you think about the circular runway project? Is it a genuine revolution or an overambitious science project? As ever, feel free to comment and share your thoughts with International Airport Review.

8 responses to “Circular runway exclusive: The reality behind the revolutionary project”