Welcome to ‘The Security Series’ from International Airport Review. We will be featuring an extensive online insight into matters of aviation and airport security with exclusive interviews, thought-provoking commentary and detailed opinion pieces from key industry leaders and experts… 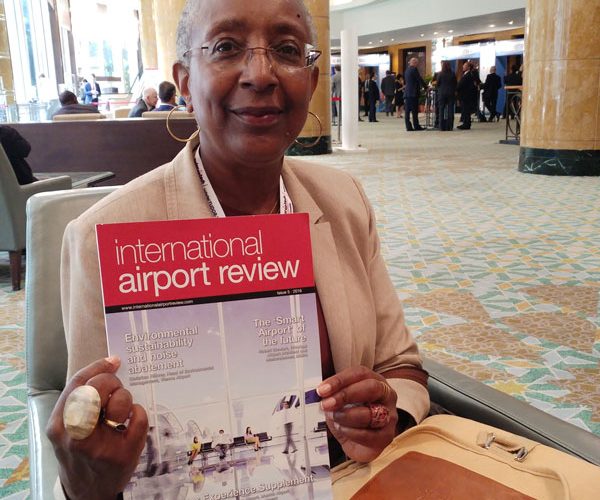 To begin ‘The Security Series’ we thought there are few better placed to discuss the issue of airport security than Airports Council International’s Director General, Angela Gittens and International Airport Review managed to sit down in Kuala Lumpur at AVSEC WORLD 2016 to exclusively discuss with Ms. Gittens the precise nature of the issues we face and how we can move forward together to ensure the safety and security of all passengers.

Hi Angela, what are we here to achieve at AVSEC WORLD in Kuala Lumpur?

We are here in Malaysia to discuss global issues facing airport and aviation security but importantly IATA, ICAO and ACI are present to collaborate and share ideas on how to solve these issues.

We hope to bring the industry together by our presence here, creating a discussion between all parties on matters of security in order to see if we can find some solutions.

“Now with the proliferation of terrorism around the world, we see widespread attacks on public places…”

In light of recent events such as those in Istanbul and Brussels, we see a greater emphasis on non-aviation security, otherwise known as landside security.

The industry, from a regulatory and operational point of view, has focused over the last 50 years on aviation security – in other words keeping aircraft safe and secure from unlawful acts.

Airports on the other hand have always had to look at overall security. What I mean by this is an emphasis on keeping people and possessions safe from the time they enter into the airport until their departure on the other side.

Now with the proliferation of terrorism around the world, we see widespread attacks on public places and it is important to, and I will discuss airports in the context of other public places.

It has raised the importance of collaborating with authorities and governments as to how to best protect our passengers and employees and property with respect to non-aviation attacks, which is one of the key themes of this event in addition to strengthening aviation security globally and addressing insider threat.

If you had to name the single biggest threat we are currently facing as an industry then in relation to airport security…?

We are all part of a society – within which airports exist – that has seen the continued evolution of threats. Airports are just a part of this evolving threat to our day-to-day life.

In detail, what we are currently witnessing are attacks on crowds and thus require an approach that aims to reduce crowding and queuing.

As a result, we are totally opposed to the introduction of a measure that creates more queues, such as additional screening at the terminal perimeter.

“In an airport setting however, we have all players under one roof: airlines, airports and regulators…”

We must now focus on the facilitation of all of these projects, activities and technologies in order to help people move through the airport faster – or not even be in the system.  For example, the printing of boarding passes and bag tags at home, saves queuing at the airport allowing the passenger to move straight through to the security checkpoint.

Further to this, the Smart Security project on which ACI is currently working in association with IATA is aiming to make the checkpoint process faster, more efficient and customer friendly with the overall goal of eliminating crowds and queuing before the security checkpoint.

We are not going to be able to stop every bad actor as they tend to look like and mingle with every other passenger in an airport.

Our focus instead is to mitigate the damage they can cause.

Collaboration seems to be the keyword here at AVSEC WORLD 2016. What exact implications does this have for the industry?

If you look at what industry has accomplished in safety in the past, this demonstrates what can be done. Each sector didn’t simply go into its own cubbyhole but instead we all came out and shared information.

This is the approach we now need to take. That said, security is naturally more problematic in this respect as we tend not to share information on security issues, perhaps for obvious reasons.

Those who collect and have the information – law enforcers and governments – tend not to share due to the pressure on them to keep the information secure. We have a sort of a ‘keep it to myself and no one will know’ culture. In an airport setting however, we have all players under one roof: airlines, airports and regulators. If we don’t collaborate we’ll never make a breakthrough.

We must now figure out how best to share information and data without compromising it. In this approach, technology will play a major role. One example is the ability to share information between all processes in an airport, which is vital to implementing risk based measures.

ACRIS (Airport Community Recommended Information Services) is a protocol that ACI is currently implementing that would allow the various parties to share the results of data without sharing the actual details. For example, as an airport I would receive key information from an airline or government without actually knowing what’s behind said information.  In security context this might be as follows: ‘There is a man with a red jacket coming in 10 minutes’ a government official might send a gate agent. Crucially, the gate agent doesn’t know his background or anything but knows to be on the lookout – irrespective of how the threat was defined.

As intelligence is gathered by law enforcement, it is ultimately up to us to make them feel comfortable in operationalising their information so that others (airport, airlines, ground handlers etc.) can then use this information and take the necessary action.

With AVSEC WORLD celebrating its 25th anniversary this year, how has the industry changed over the last quarter of a century?

The very fact that ACI, IATA and ICAO are now putting on conferences such as AVSEC WORLD 2016 on together represents an indication of what has changed.

All of these parties now understand that it’s not a question of government vs airline vs airport; we are all part of an industry that deals with the same person – be it a passenger or shipper who himself or herself fundamentally does not care with which source a potential failure lies. They just need it not to fail.

What role must ACI assume as a global organisation in order to ensure future progress?

ACI, IATA and the other organisations have a responsibility to feed information and advice into the decision makers so that the right decisions are made at the right time.

ACI for example helps its members – airports – by offering guidance and expertise on which best practices to employ and we provide an opportunity to share information that will allow and facilitate airports from collaborating and helping one another.

We have developed a programme, APEX (Airport Excellence in Safety) that collaborates with the FAA and ICAO in order to provide the possibility for any airport to request ACI and ICAO or another regulatory body to visit their airport and analyse the level of safety at which the airport currently operates and subsequently make suggestions and write a report with possible improvements that the airport can then consider.

We are now looking to replicate this successful model for the world of security.

In essence, ACI issue guidelines, publications and provides conferences to encourage education and foster discussion. As it was put to me once, we provide a type of ‘over the shoulder’ help.

Finally, how important are conferences such as AVSEC WORLD?

They are extremely important… They offer the possibility for a unique insight. Even speakers who are present to provide insight also learn immensely from the process and with the networking breaks an extremely valuable part of the event, experts and industry professions are given the platform to speak to like-minded people.

For example, I was at a luncheon yesterday and someone mentioned a very exciting new technology. While I won’t go into too much detail, essentially this technology would allow some preliminary screening for the big threats in a walk by situation – so it wouldn’t catch your nail file but would identify a large knife or explosive. This can be done cheaply and unobtrusively and doesn’t even have to be 100% accurate as it is of a preliminary and hidden nature thus not affecting the passenger experience but crucially enhancing their security. These are the sorts of solutions we need to be talking about and AVSEC WORLD and many other conferences provide the platform to do so.

It was a pleasure speaking to Angela Gittens and it seems that the strategy is clear. It will now be a question of implementing the rhetoric into clear, forward-thinking progress in matters of security. Unfortunately, however, time is not on our side.