Powered by the sun – Adelaide Airport

With their flat expanses of roof and long stretches of unused land, airports are an obvious choice to harness solar energy generation. Following its recent solar installation, which is the largest rooftop solar system in any Australian airport, Adelaide Airport’s Facilities Manager, Phil Hogan, and Environment Manager, Stephanie Bolt, reveal how the airport is leading the way in sustainability… 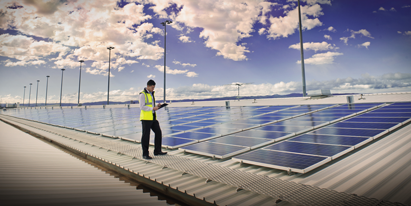 Solar panels are becoming ever more affordable, and while uptake of large-scale solar among Australian airports has been mixed, Adelaide Airport is leading the way with its new 1.17MW system on the roof of its multi-level car park. The new commission brings Adelaide’s total generation capacity to 1.28MW – not only is it the largest privately-owned solar PV system in the state of South Australia but the largest rooftop system in any Australian airport.

In May 2015, Adelaide Airport became the first airport in Australia to be recognised by the global Airport Carbon Accreditation programme for optimising its management and reduction of carbon emissions. Adelaide Airport Ltd (AAL) is now certified as Airport Carbon Accredited at Level 3 ‘Optimisation’, for its work in reducing its carbon footprint whilst also working to guide and influence stakeholders to do the same. It is the seventh airport in the Asia-Pacific region to reach this level.

Adelaide Airport – gateway to the state of South Australia Adelaide Airport serves as the gateway to the state of South Australia. It caters for almost eight million domestic and international passengers annually. Destinations include all other Australian mainland capital cities, as well as New Zealand, South East Asia and the Middle East. As with any major airport, Adelaide is a significant economic driver for South Australia, with an estimated socio-economic benefit of AUD$1.9 billion annually (roughly 2% of Gross State Product).

As part of its key corporate responsibility AAL ensures it pays particular attention to its environmental impact. The airport’s vision is to be a top-tier airport business centre in the Asia Pacific region, and further improving its environmental credentials is a key part of this vision. To that end, the airport’s Strategic Plan recognises sustainability as a key philosophy that underpins its future. AAL sets carbon and energy reduction objectives and goals in each five-year Airport Environment Strategy (a document developed in accordance with requirements set within the Australian Government’s Airports Act 1996 and aligned with AAL’s Sustainability Policy and Low Carbon Statement). In 2016 AAL’s goal is to reduce the per-passenger electricity consumption by a further 10% and commensurate greenhouse gas emissions by 2019.

Adelaide Airport’s strong focus on sustainability is led from the top by Managing Director, Mark Young, who believes the significant capital investment in a solar system of this scale is justified by its many benefits to overall business. It also assists the South Australian Government in achieving its aggressive Renewable Energy Target of 50% of the state’s power to be generated by renewables by 2025.

The recently-commissioned 4,496-panel solar installation by Australian company, Solgen Energy, will generate over 1,700MWh a year; reducing AAL’s emissions by close to 10% and enabling the airport to achieve its carbon goal in the space of a single year.

One of the key decisions that needed to be made very early in the planning process was to adopt an ownership model over a power purchase agreement (PPA) model.

Under a PPA model, a third party would install, own, operate and maintain the solar installation at no up-front cost to Adelaide Airport and, in return, agree to purchase the electricity generated over a specified period at a pre-determined price path.

However, on a comparable solar installation, the ownership model not only produces superior financial returns (particularly in light of dramatically increasing electricity prices in Australia) but enables Adelaide Airport to retain control of its infrastructure and more closely manage long-term maintenance costs.

Whilst a PPA can be viewed as a means of transferring risk for the life of an installation, the availability and affordability of high quality and reliable solar technology makes direct ownership an attractive, low-risk proposition. This is especially true as system size increases.

An essential aspect of establishing a positive business case for Adelaide Airport’s shareholders was understanding and clearly articulating the potential risks and benefits – both financial and non-financial – of the installation.

Some key benefits attached to this project offered a financial incentive that, whilst not explicitly quantified, added recognisable value. They included the deferral of any future purchase of additional peak demand from electricity retailer and, similarly, deferral of future investment in augmentation of the airport’s inset electricity network; increase in on-airport property values and rental potential; protection from energy price increases and/or the addition of a government-mandated carbon price in Australia.

Non-financial benefits include the positive contribution towards the airport’s risk profile, reputation, and sustainability credentials and increasing general public awareness of renewable energy.

Each solar panel was transported on top of the 17-metre building using a vertical boom with extended flyjib truck-mounted crane – the only crane of this type in Australia – which enabled equipment to be loaded efficiently, minimising operational disruption.

Walkways and water outlets were integrated into the design so that any given panel is within eight metres of a walkway and can be accessed for cleaning with a maximum 30-metre length water hose with broom attachment – a critical maintenance issue that is sometimes overlooked in the design phase. The installation largely comprises 4,496 Trinasmart solar panels that have the ability to operate independently through built-in Tigo Energy power optimisers. As a result, each panel will be able to operate at its maximum output irrespective of partial shading that may occur on the array. For panels impacted by shade, this technology is projected to increase energy output 20% above that of conventional panels.

Each panel is independently monitored and the entire array can be shut down at panel level from a single switch, significantly reducing arc and fire risk. Safety was the highest risk issue for Adelaide Airport and adopting this technology was singularly crucial to the project progressing.

Carrying out the task of converting 1.17MW of power from the sun into electricity is a bank of 16 60kW and two 20kW SMA Sunny Tripower inverters. The Adelaide Airport installation is the first to use 60kW inverters, which are specifically manufactured for commercial solar applications. Their selection for this installation resulted in significant cost savings, reducing the area needed to house the inverters by 75%.

An installation of this kind can appear deceptively simple but nonetheless revealed a number of significant challenges, particularly against a backdrop of suitable return on investment.

A key aspect in obtaining the best possible outcome from the tender process was the development of a concept design for the installation. This removed as much uncertainty and risk as possible, and enabled proponents to scope the project and address any challenges in alignment with Adelaide Airport’s needs and expectations.

Any projected reduction in energy output against expenditure would have compromised viability of the entire project. Two telecommunication towers planned for construction on the north-west side of the car park roof, and extending approximately 14 metres above the solar array, could have potentially scuttled the business case. However, this challenge was overcome through selection of Trinasmart solar panels that are able to generate maximum energy output irrespective of partial shading that may occur across the northern section of the array.

It was essential that operational restrictions on the short-term car park were minimised to maintain customer service levels and protect a significant income source, whilst ensuring visitor and staff safety. Utilisation of a unique truck-mounted crane allowed for loading operations to be conducted efficiently and on only one day each week during construction.

Businesses are becoming more educated on the benefits of solar and are consciously deciding to make the switch; particularly as the cost of solar technology continues to fall. Adelaide Airport’s solar installation is a leading example of how large-scale commercial solar is on the rise on the back of increased understanding of the long-term investment opportunity associated with powering facilities with high daytime energy demand.

With the success of this project, Adelaide Airport has embarked on other solar installations, including a 30kW array on a tenanted building in one of its business parks and another 30kW array on a staff occupied office building. More are in the planning pipeline.

As awareness builds among tenants, Adelaide Airport will be taking steps to encourage them to invest in solar and thereby further contribute to reducing the carbon footprint of the entire airport.

Phil Hogan has been the Facilities Manager at Adelaide Airport Ltd. since 1997. He is responsible for overseeing the company’s maintenance and critical infrastructure management programmes and major service contracts.

Stephanie Bolt has been the Environment Manger at Adelaide Airport Ltd. since 2005. She is responsible for overseeing the company’s
sustainability, environmental compliance and wildlife management programmes. Prior to this she was a Senior Environment Advisor at the
Zinifex (now Nyrstar) Smelter in Port Pire, and spent many years in various environment and natural resource management consulting roles in Australia and Singapore.