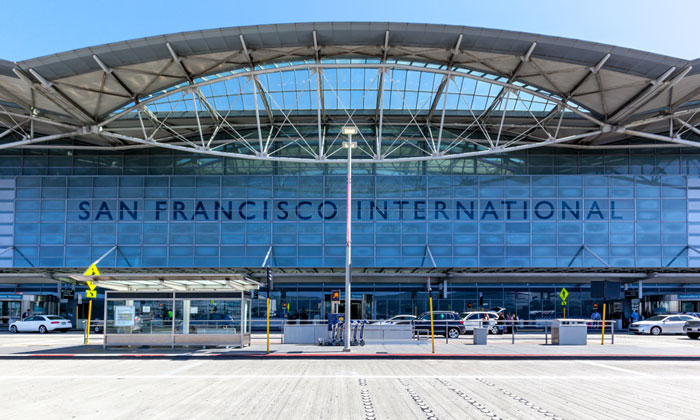 Airports face a unique challenge when integrating TNCs, such as Uber and Lyft, into their existing ground transportation business model. As one of the first airports in the United States to create an airport permit process for TNCs, SFO was at the forefront of these integration challenges. Faced with the need for robust trip-tracking information without the benefit of vehicle transponders or clear commercial vehicle markings, SFO created an innovative app-based commercial transportation (ABCT) system. The ABCT system provides real-time data to support all aspects of airport TNC operations, including roadway planning, billing verification and enforcement of airport rules and regulations.

By 2012 both Uber and Lyft had established mobile ride-hailing businesses in San Francisco. Being a region of early adopters, such concepts became increasingly popular, leading SFO to begin evaluating the steps necessary to create a permit structure to allow legal operation of these businesses at the airport.

In July 2013 the California Public Utilities Commission (CPUC) offered a legal framework for such businesses to operate throughout the state, proposing a set of regulations and coining the term ‘Transportation Network Company’, to describe the business. The rules were approved in September 2013 and a state permit process, similar to other forms of commercial ground transportation, was established later that year.

In order to operate at an airport in California, the CPUC required TNCs to hold both the state-issued permit as well as specific approval from that airport. Throughout the development of this regulatory framework, SFO worked with TNCs including Uber and Lyft to define an airport-specific permit structure to ensure a level playing field with existing forms of commercial ground transportation. In October 2014, SFO became the first airport in the state to implement a TNC airport permit, and the first airport in the United States to complete agreements with both Uber and Lyft.

The shift from managing transponder-based forms of ground transportation to one based on mobile devices posed several challenges to SFO. Firstly, the airport had to consider how to obtain accurate trip counts on private vehicles being used intermittently for commercial purposes without transponders. In addition, SFO faced the challenge of enforcing its own ground transportation rules and regulations on vehicles with no permanent markings to identify them as commercial vehicles to enforcement staff. The absence of transponders also forced SFO to rely on a process of self-reporting monthly trip volume by the TNCs for trip records and payment of fees. This created an urgent need for an effective auditing tool to ensure the accuracy of the information being self-reported by the TNCs.

Creating an app for tracking

The system leverages existing TNC driver mobile apps, along with mobile geo-location services, to identify a vehicle’s location. As part of their permit with SFO, TNCs agree to supply real-time data to the ABCT system, providing the location of each vehicle when they enter or exit an established global positioning system (GPS) geo-fence around the SFO property, as well as when a passenger is dropped off or picked up at the airport. The system alleviates the need for traditional transponders, and addresses the challenge of drivers who may work for multiple companies at any given time.

The ABCT system is comprised of two elements: a web service that receives real-time data from TNCs for operational activity within an established GPS geo-fence, and a web application to enable kerbside enforcement using said data. The TNC driver’s mobile device acts as a virtual transponder while within the SFO geo-fence, eliminating the need for roadside infrastructure to track vehicles.

The first component, the web service, defines a standardised data interface and format for each TNC to submit their real-time data. This interface was designed with the TNCs to establish a common protocol and communications channel to submit data securely. The ABCT system records TNC events referred to as ‘pings’. These pings include data that describes the type of event such as entry, drop-off, pick-up and exit, and other data such as the time of the event, vehicle licence plate, latitude and longitude.

Given the need for high availability, the web service incorporates redundancy at every layer, including reverse proxy and load balancing across multiple servers. Since its launch on 1 January 2015, the system has not encountered any data loss and all transactions submitted to the web service are encrypted. The system’s components are protected by network security hardware, firewalls and access control rules. The web service has no graphical user interface for end users, but instead functions as a machine-to-machine interface for the purpose of real-time data transfer between SFO and permitted TNCs.

The second component, a compliance manager, is run from a mobile browser on the phone of enforcement personnel, providing the necessary data in the field to perform their duties. Compliance officers can search vehicles on the airport property by using a real-time licence plate search function. The application provides total vehicle counts on airport property, viewable in a variety of outputs, including real-time, the past hour, or the past 24 hours. A list of vehicles by TNC and licence plates can be viewed under each one of these categories. Individual entries in the list can display details that include the last 10 received pings, providing a location history for a particular vehicle. The application is not available on the public Internet and must be accessed using an encrypted VPN tunnel.

The project team at SFO developed the ABCT system in nine months, from March to December 2014. The airport utilised existing enterprise license agreements and hardware to reduce development costs. Developers met extensively with the various stakeholders, including TNC representatives, other ground transportation groups, law enforcement personnel, industry trade associations, and city and county officials. During the quality assurance phase of the project, SFO and TNCs maintained an active dialogue to manage logistics and regressions. A staging environment allowed both parties to make changes without impacting the production environment.

Development costs totalled $537,000 – more than half of which was related to software licensing and maintenance. Based on the current cost-recovery model used at SFO, the system is amortised over three years. In response to interest from other airports conducting similar TNC integration, SFO partnered with the American Association of Airport Executives (AAAE), an industry organisation, to license the ABCT system for other airports around the United States to use. The AAAE has developed a standard national model based on SFO’s current ABCT system, using a cloud-based service.

SFO’s efforts were acknowledged by the Center for Digital Government, which recognises public-sector employees and local government organisations for their contribution to information technology issues in the State of California. In the category of ‘Best In-House Developed Application’, the airport was awarded the 2015 ‘Best of California’ award for the creation of the ABCT system.

Since its introduction, the financial benefits of the ABCT system have been clearly demonstrated. In 2015 the system allowed SFO to recover more than $150,000 in trip fees that would have gone underreported by TNCs. In addition, the enforcement capability of the system has supported the issuance of over $360,000 in administrative fines in 2015.

Beyond the recovery of trip fees and fines for rule violations, the ABCT system has provided SFO with an effective way to manage a rapidly-growing new form of commercial ground transportation. In October 2014, the first month of full operation, TNCs recorded a total of 101,000 trips at SFO. By December 2015 that figure had grown to over 347,000 trips for the month. TNCs now represent the largest single form of ground transportation at SFO, accounting for approximately 56% of all airport activity. In 2015 SFO collected more than $12.4 million in trip fees from TNCs, supporting roadway maintenance efforts.

Changing customer preferences created the demand for ride-hailing services like Uber and Lyft, and customers now expect to be able to use such products to or from an airport. SFO was on the front line of this revolution in ground transportation and gained vital industry knowledge through the experience. The development of the ABCT system at SFO represents an innovative response to a sweeping change in the transportation landscape; a change that continues to unfold at airports around the world. The benefit of the ABCT system rests not only in its response to this change, but in its ability to remain relevant as other forms of transportation evolve to an app-based hailing business model.

Ian Law is Deputy Airport Director/Chief Information Officer (CIO) at San Francisco International Airport. He holds a BSc in Computer Science and an MBA from University College Cork and Cranfield School of Management, respectively. His experience encompasses technology, business and advisory roles across a range of companies including Computer Associates GmbH in Germany and KPMG in London. Ian is a champion for the role of technology in airports and has led initiatives at SFO to create a Transportation Network Companies management platform, trial Mobile Passport Control, implement a high-density Wi-Fi service and innovate real-time data services for taxis. He sits on several technology committees and working groups at the City and County of San Francisco.

One response to “San Francisco International Airport: Tracking the future”