An overview of the Borealis Free Route Airspace (FRA) programme

Posted: 28 July 2015 | Olle Sundin, Chair of the Borealis Alliance Board

Olle Sundin, Chair of the Borealis Alliance Board, gives an overview of the Borealis Free Route Airspace (FRA) programme, who is involved, the challenges to overcome, how it fits into SESAR and what benefits will follow. 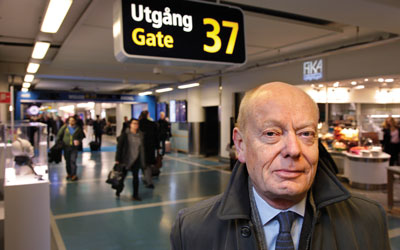 The Borealis Alliance was established in the summer of 2012 by nine North European Air Navigation Service Providers (ANSPs) – the ANSPs of Denmark, Estonia, Finland, Iceland, Ireland, Latvia, Norway, Sweden and the UK. In 2014, the nine member ANSPs between them controlled more than 3.8 million flights, representing over 38% of European traffic. The Alliance was created out of recognition by those ANSPs that there were a number of challenges facing the ATM industry – the need to reduce costs, improve flight efficiency and reduce environmental impact – that were best addressed by cooperating on a commercial basis.

The Borealis FRA programme is our primary focus and will deliver significant benefits to our customers. We know our customers want to find ways to reduce fuel burn, reduce costs and fly more direct routes. This programme means that airlines and business aviation operators will in future be able to plan and fly the most cost effective, fuel efficient and timely routes across the entire airspace managed by Borealis Members rather than following pre-defined ‘routes’ within each member country’s airspace. This will enable them to save time, money and fuel and ultimately, provide a better service to their passengers. We know this is a priority for airlines which is why we’re investing in making it a reality.

SESAR is all about developing a future ATM system that can improve performance, safety and the environmental impact of aviation, whilst dealing with forecast growth in air traffic. The SESAR JU proposed a pilot common project (PCP) that was endorsed by the European Commission. The PCP identifies six ATM functionalities that are mature for implementation which, when deployed in a timely, coordinated and synchronised way, will contribute to the achievement of the essential operational changes identified in the European ATM Master Plan. Free Route Airspace is one of these six. The Borealis FRA programme will deliver this in advance of the required deadline and most importantly, join up FRA initiatives across the airspace of all nine Borealis ANSPs, thus maximising the potential benefits to Europe’s aviation industry.

There will be a number of challenges in delivering FRA across the nine ANSPs of the Borealis Alliance, who use different technology, have different traffic patterns and different levels of airspace complexity. However, the programme will build on the excellent existing cooperation of the Members through the three Functional Airspace Blocks (FABs) and the ongoing North European Free Airspace (NEFRA) programme.

The challenge will be to join the various free route airspace areas that already exist to create a single area of free route airspace, which, when completed, will extend from the eastern boundary of the North Atlantic to the western boundary of Russian airspace in the North of Europe. However, we’re confident, given the experience of our Members and the collaborative nature of the Alliance, that any obstacles will be overcome and that the programme will set a benchmark for cross-border and cross-FAB cooperation in Europe and beyond.

The Borealis Free Route Airspace Concept of Operation focuses on the airspace above FL285, whilst in individual states/FIRs it may extend below FL285 depending on the local circumstances. The connectivity between FRA and adjacent ATS route network is ensured through common entry/exit points.

Our customers want to be able to save fuel, save money and shorten journey times. However, they also want to be able to make a judgement as to the best route for their aircraft based on a range of criteria. Implementing the Borealis FRA programme will empower operators to plan and take their preferred route between destinations, taking into account a range of different factors, including variables such as weather systems, prevailing winds, shortest routes and military activities. The fact that they can plan such routes will enable them to reduce fuel load, delivering savings in terms of both costs and environmental performance.

Following a workshop in London on 4-5 March 2015 with the National Supervisory Authorities (NSAs) and ANSP representatives, the NSAs of the nine Borealis Members formalised their cooperation towards the achievement of the Borealis FRA vision and future common Borealis initiatives by establishing a ‘9-State NSA Group’. Regulatory approval is an important step in any major change to the way we manage air traffic so the fact that we have our regulators’ cooperation is a big boost and will help us focus on delivering the customer benefits.

During his 40 year career in the airport industry, Olle Sundin has worked closely with governmental and private organisations, as well as local and regional representatives. As a highly respected figure within the industry, he has frequently spoken at conferences, meetings and international seminars. After initially training as an Air Traffic Controller, and as a pilot, Olle has worked in key management roles, notably Airport Director and Managing Director for several airports across Sweden. Olle has held the position of Director General at LFV since 2013.