With the football World Cup arriving in 2018, the Russian city of Rostov on Don needed to replace its current airport with one that would expand its capacity well into the future. Matt Cartwright and Alex Bitus of Twelve Architects explain how it approached its design for the all new international airport. 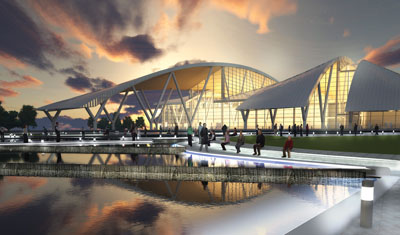 Rostov on Don is a port city and the administrative centre of Rostov Oblast and the Southern Federal District of Russia. It is the tenth largest city in Russia with a population of just over one million people. The city’s existing airport is located nine kilometres east of Rostov on Don. It became an international airport in 2006 and has experienced significant passenger and freight growth in recent years. With the awarding of the 2018 football World Cup to Russia and identification of Rostov as one of the host cities, additional capacity was required.

The existing facilities were felt to be unsuitable for further expansion so instead a new, world class international airport was planned, the first phase of which will be completed in time for the 2018 deadline. The new airport will be located to the north east of the city on a site that can accommodate the requirements as well as planned growth.

Airports of Regions, which is part of the Renova Group, one of Russia’s leading private business conglomerates, is the developer of the airport and will later act as the operator. To achieve its aim of securing a high quality team for the design of the main terminal building, Airports of Regions launched an international design competition, initially inviting 11 architectural practices from the UK, France and Russia to submit design proposals.

From these submissions, four finalists were identified – three Russian practices and Twelve Architects from the UK. These four were invited to present to a jury made up of the client management, regional government officials and technical advisors.

Twelve Architects’ scheme was chosen as the clear winner and the practice was commissioned to provide technical documentation to develop and support the competition design and to refine it with the client team. The design was identified as being memorable and striking, although it was also described by Jivan Vartanian, Minister of Transport for the Rostov region as ‘risky’. One of the Russian practices was also asked to provide additional information.

Following a period of design development, it became clear that, while ambitious the Twelve Architects’ scheme could, in fact, be delivered and met the client’s requirements for future expansion. In December 2014 the project was granted full approval for the design to move ahead to construction.

Prior to creating the design, Twelve Architects visited the site and the city of Rostov on Don to understand the context and culture of the place. The practice also studied the client brief and utilised its experience of designing airport transport hubs and iconic architecture to distil the brief into eight key ‘design drivers’ that were used to develop the concept:

Development with the future in mind

Twelve Architects’ masterplan retains the location of the buildings as defined in the client brief and the design makes reference to the River Don, which is the origin of the city, through the design of the central landscaping and water feature that connects the airport terminal to the train station, car park, hotel and office buildings.

The concept for the Yuzhny airport terminal is inspired by the analogy of the airport is a ‘sky bridge’ that connects cities and countries together. This is realised through the design of the roof which is formed from a series of elegant bridge arches. Initially these were of varying widths, but whilst the arched form of the competition winning scheme remains at the heart of the design, this has been streamlined to nine arches each 16m wide. An eight metre wide central glazed skylight marks the internal boundary between the international and domestic zones with the arched form also being used as orientation devices for arrival and departure routes. Externally the arches overhang the perimeter walls, providing covered zones to the drop off area and adjacent hotel and business centre.

A key aspect of the brief was the ability for the terminal to be expanded as passenger numbers grow. The building is organised on an orthogonal and repetitive 16x16m grid and has been designed to easily accommodate future expansion by adding additional roof elements and replacing lateral walls. The existing main airside and landside façades would be untouched and the airport could be expanded whilst remaining operational.

When it opens in 2018, the airport will be designed to accommodate up to five million passengers as required in the brief. However, planned growth will add another 100,000m2 to the terminal, enabling this number to be trebled.

Located in front of the terminal is the central airport external plaza. This space connects the terminal to the car parks and the hotel, office and train station buildings that are planned in future phases of development. It creates an attractive and welcoming 24 hour space that works for all seasons of the year.

Twelve Architects’ commission also includes the design of the public areas, including international and domestic departures lounges, check in concourse, retail, baggage handling and offices. The practice’s approach to this centres on the passenger experience, believing that air travel should be an enjoyable and memorable experience. At the heart of the interior design is a desire to put passengers at their ease from the moment they arrive at the terminal. The combination of water externally, the curved forms, carefully chosen materials and lighting and natural light are intended to create spaces that passengers feel comfortable in.

To create the warm, relaxed environment desired, and to overcome the Russian building code ban on timber to interior soffits, the practice has developed a bespoke metal panel system to clad the underside of the roof. This is combined with recessed lighting along each arch to delineate the curve.

Careful consideration has been given in the development of the façade to maximise views both in and out of the key spaces within the terminal. These include the check-in concourse, arrivals hall, baggage reclaim area, departure gates and business class lounges.

The design concept of the ‘bridge arches’ has been incorporated into the baggage reclaim area, with the luggage reclaim system forming extensions to the arched roof that connect down to the luggage caracals. To respond to the potential of families travelling business class on international flights, the design of the international business class lounge incorporates a dedicated space for children.

The client brief also required the design of the airport to include a world class, large scale retail experience, as this would both improve the passenger experience and also maximise revenue. This in turn would allow a reduction in the landing charge cost, thus making it more attractive for airlines to fly to Rostov on Don.

Twelve Architects worked in close collaboration with the client’s in house retail and branding specialists to develop a common aesthetic to the retail zones that complements the design of the terminal whilst allowing the retailers to fit out the units internally with their own branding and specific requirements. The retail units have been positioned centrally in the spaces away from the perimeter of the terminal. This maximises the frontage to the retail, whilst creating accessible seating or circulation spaces adjacent to the façade, thus allowing views to be maintained both in and out of the terminal.

A range of passive and active environmental design measures are incorporated into the design to deal with the southern Russian climate which sees very cold winters and long, warm summers. The arched roof extends to form a canopy providing shade from solar gain and glare which is combined with high performance glazing to the façades. Natural ventilation during the summer months will be enabled both through the façade and through openable vents in the roof whilst high levels of insulation to the solid elements of the roof will prevent heat loss in winter months. The thermal mass of the floors absorbs heat and moderates internal temperature. The mechanical service strategy will include heat recovery that will reclaim hot air, then mix it with fresh air and recirculate it into the habitable spaces during the winter months.

The site enabling works to prepare the transport and utilities infrastructure has commenced and the selection of the main contractor for the terminal is in process with construction due to site in early 2015. The new airport will transform the current experience of arriving by air forming a new gateway to Rostov on Don during the 2018 football World Cup and beyond. It will aid in promoting The City and Region to tourists, investors and enhance the facilities available to the local residents.

Matt Cartwright is one of the founding Directors of Twelve Architects, an international architectural practice based in London, Edinburgh & Ekaterinburg. He has a broad range of experience of delivering award winning and innovative projects. He blends this experience with a fresh approach to new proposals.

Alex Bitus is an Associate leading Twelve Architects’ Aviation & Transport team and has experience of delivering airport projects in Russia. He trained both as an architect and a structural engineer. He blends his considerable knowledge of technical documentation with a passion for conceptual design.