In a bid to improve the efficiency of operations and combat delays at Adolfo Suárez Madrid-Barajas Airport, an A-CDM system was implemented. Airports Network Director at Aena Aeropuertos, Fernando Echegaray del Pozo, provides an overview.

Airport Collaborative Decision Making (A-CDM), a joint initiative of EUROCONTROL, ACI Europe, CANSO and IATA, aims to improve the efficiency of airport operations by reducing delays, increasing the predictability of operations and optimising the use of resources, both material and human. The aircraft rotation process is classed as a ‘low visibility’ situation by air navigation service providers (ANSPs) and EUROCONTROL. During the rotation process, delays can be generated by a variety of possible causes such as cargo, catering, cleaning, refuelling, crew activity or extraordinary security measures. These situations should be formalised via a delay (DLA) message, or even the cancellation of the flight plan and generation of a new one, ideally in advance enough to be useful for European ATM Network management.

A DLA message received a very short time in advance, and even delayed on the calculated take-off time (CTOT), implies that the EUROCONTROL Network Manager Operations Center (NMOC) has considered the flight ready to fly on time by the algorithms that manage regulations, but that it’s not actually ready to depart on time, which results in wasted ‘through room’ on already congested airspace.

As a result of these inefficiencies, EUROCONTROL estimates that 10 – 20 per cent of regulated capacity (capacity of congested airspace sector managed by NMOC) is lost. This means that scarce resources are wasted, due to flights not being ready to take-off on time and the NMOC only finding out at the last moment. Additionally, flights that have been prepared on time could have been grounded for having a later CTOT.

It was not only capacity that was wasted in that regulated airspace sector, it was also wasted in other sectors of the route – in the approach airspace and the arrival slot at the destination airport.

The situation is not much better from the airport’s perspective either. Both the airport of origin and destination suffer schedule deviations in real-time which requires operations managers to reallocate and manage the airport’s resources with little information, sometimes even several times due to just one flight. Lack of information can, in turn, lead to a number of situations including late attendance by airport resource and handlers or wasted waiting time at aircraft parking which has been assigned for a delayed arrival flight.

Furthermore, the departure sequence is based on the basic principle of ‘first call, first served’, which causes the sequence not to be ordered, as sometimes there is no one ready to take-off (inefficient use of the runway), while on other occasions holding point delays can be generated for several aircraft awaiting clearance to enter the runway and take-off. These include fuel inefficient consumptions and unnecessary emission of gases into the atmosphere.

A-CDM is based on sharing information. Each stakeholder involved in the process (NMOC, ANSP, airlines, pilots, handlers and airports) has reasonably accurate information at each stage. Several critical milestones are established along the arrival and take-off rotation. Each party submits their most relevant information so the most reliable source information is put forward for any particular milestone.

For example, when an aircraft takes off from the airport of origin, the more accurate information can be the airline Aircraft Communications Addressing and Reporting System (ACARS) message, or local Air Traffic Service radar detection. The entrance to our airspace Flight Information Region (FIR) or terminal area can be detected with high reliability by our ANSP, based on radar information. For landing times there are several sources of information, such as the ACARS message from the aircraft, local air traffic control system, airport multilateration or Surface Movement Radar. Ground handling activities are provided with great accuracy by handlers, and so on.

Instead of blind waiting, information shared by other stakeholders increases the predictability of the operation and allows everyone to manage their resources more efficiently; adapting them to actual demand and intervening at the correct time in the process. As a result the whole process is improved and becomes more efficient, as it allows us to anticipate the situation more easily; coping with the inevitable fluctuations of real operations with respect to the initial programming of the day.

Furthermore, based on this information, the aerodrome control service generates a pre-sequence of departures, allowing the more efficient use of runway capacity, and also as an additional positive collateral effect, the holding points waits are eliminated, generating significant savings in fuel and emissions of gases into the atmosphere.

To do this, information from the rotation of the aircraft (including airlines, handlers and airport) consolidates in the airport operational database (AODB), whereas flight phase information (ANSP and EUROCONTROL) consolidates in NMOC. Communication between two systems is achieved by a bidirectional flow of messaging: FUM (Flight Update Message) messages from NMOC to AODB to update information of incoming flights to the airport, and DPI (Departure Planning Information) messages from AODB to NMOC to update information for outgoing flights. There are 16 milestones defined in an A-CDM process (see Figure 1). 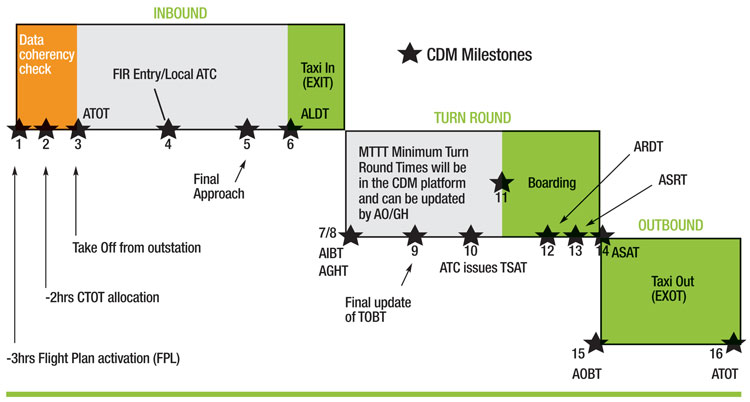 The A-CDM Project at Adolfo Suárez Madrid-Barajas Airport began in 2011 and was formalised with the signing of a Memorandum of Understanding between the airport, handlers and the major airlines that operate in Madrid. A working structure based on a Steering Committee (decision high level) and an Executive Committee that coordinates three Working Groups: Procedures, Systems and Variable Taxi Time (each led by staff from the Airport Operations Division), and Ignacio Aznar and Carolina Igal, who led the Project Management.

In 2011, the first year, the common operating procedures were developed, and then functional requirements for airport AODB (called SCENA), for operating handlers systems and also for automated air traffic control system (called SACTA) were defined, including an Arrival Manager (AMAN) and a Departure Manager (DMAN).

During the second year, 2012, software updates for the above systems were developed, and during the third year, 2013, technical and operational tests were carried out. A-CDM was finally put into operation on 20 December 2013.

DPI messages sent from the airport are currently being validated by EUROCONTROL NMOC, prior to final connection to the Central Flow Management Unit (CFMU), which is expected in June 2014.

The runway holding point delays have been reduced by around a third, and consequently the departure time tolerance window is being used more flexibly than before, when air traffic control staff had to manage longer queues within that tolerance window. A-CDM also made control tower direct communication with CFMU available; allowing greater flexibility in negotiations regarding regulated flights.

Taxi times have improved by around eight per cent from the average taxi times that were calculated by the corresponding working group using historical data from 2009 to 2011. This represents an improvement of more than two minutes in average, meaning that total fuel consumption could even surpass one million litres of kerosene in savings.

Regarding the improvement to predictability, the introduction of AMAN has increased accuracy and timings in obtaining an estimated landing time (ELDT), which facilitates the management of human and material resources to airport and handlers. Additionally there is also the improvement in the predictability of take-off time, which assists airspace management for EUROCONTROL NMOC.

As a final obvious advantage there is the increased visibility of all processes of rotation of the aircraft (handling processes, apron management, clearances and ground control), which allows a better understanding and management of delays and delay codes, improving operational awareness during the process of rotation of the aircraft in an A-CDM airport.

Fernando Echegaray has over 20 years of experience within the aviation sector. He was appointed director of the Barcelona-El Prat Airport in February 2006 and led, among other projects, the commissioning of Terminal 1. In February 2012 he was appointed Director of the Airport Network, which remains his current position. Previously, Fernando held the position of Director of the Canary Airports Group and also Director of Tenerife South Airport. Since he started working at Aena in 1985, has been responsible for various areas of activity at Palma de Mallorca airport. He was later Operating Manager of the Mexican Pacific Mexican Airports Company SA – a company in which Aena, through its subsidiary Aena Desarrollo Internacional, SA, is the airport operator of 12 airports with over 20 million passengers. Fernando has a degree in Information Systems and Industrial Engineering Graduate in General Administration (PDG) by IESE. 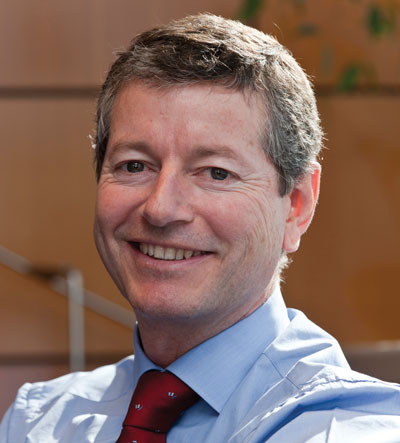