Paving the way for the A380

In preparation for the increasing introduction of heavy aircraft and new types of landing gear (e.g. B777 and A380), AIRBUS, STBA and LCPC undertook an ambitious research programme to define a more efficient pavement design method. 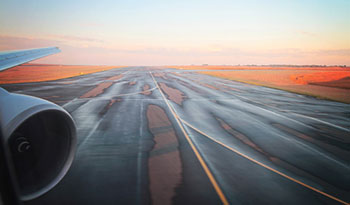 Full scale pavement testing to optimise and validate A380 landing gear design was started in 1998 at Toulouse-Blagnac Airport in two phases; flexible tests, and rigid pavement tests. New test-validated methodologies are under development, using the software ALIZE to supplement and possibly replace the current Aircraft/Pavement Classification number (ACN/PCN) method, which, although widely used, has limited theoretical basis. The development process calibrates ALIZE results with those from full-scale static and fatigue tests using real aircraft on both flexible and rigid pavements. A380 landing gear configuration, and those of some similar aircraft, were reproduced using a landing gear configuration test vehicle. The results obtained from the test were also validated against production aircraft.

Thirty per cent of A380 targeted airports have rigid runways; therefore a second phase was launched in 2000 using the 3D FEM. A380 landing gear configuration was frozen, and the aim of the tests was to obtain a set of data to improve pavement knowledge and to correlate mathematical models using FEM.

Contrary to the National Airport Pavement Tests Programme (NAPTP), an important P.E.P issue was to be the most representative of real airport conditions. Two experimental pavements were constructed on open field conditions to include the significant influence of external meteorological conditions, and the requirement to subject pavement to real aircraft loads.

Toulouse-Blagnac airport was selected for laying the specimen pavement as extension to an existing taxiway. The test pavement was 165m long, 30m wide. Each test section was 35m long, separated from the next one by a 5m long “neutral zone”.

Four sections of flexible pavement structures were designed according to the French method for four different subgrade categories: CBR 4, 6, 10, and 15. The test taxiway was built to the current design standard for a B747-400. Structures were made from the same materials and the same thickness for bituminous layers (Bituminous Concrete 8cm, Bituminous Gravel 2*12cm) and the subbase layer had a variable thickness, depending on the subgrade, made from Recombined Humidified Gravel. Three out of four subgrades were found on site (CBR 15, 10, and 6) and the weakest subgrade, CBR 4, was reconstituted with imported material.

A simulation vehicle was manufactured to represent full-scale main landing gear configurations of various wide bodies — A380, A340, 747, 777, MD11 — with up to 22 driven wheels individually loaded up to 32 tons. The vehicle features variable dimensions for bogie position, wheel, and axle spacing.

For redundancy, a total of some 250 sensors were installed into the four sections. The separation interval between sensors was greater for the deepest layers, where the wheel grouping effect was expected to induce a larger area of loading influence (subgrade and bottom subbase interval was 60cm)

In the upper layers, the stress diffusion pattern is sharper and restricted to a smaller area around the wheel; therefore sensors were closer together (top subbase and Bituminous Gravel interval is 15cm).

Of the total of 22 configurations tested, eight were selected taking into account the two following criteria:

The results of the strain measurements presented are shown in a final summary intended to facilitate a later numerical simulation. The summary takes into consideration the various bogies that are not interactive in a given configuration.