Posted: 17 June 2014 | Belkacem Laïmouche, Head of the Airfield Pavements Subdivision at the Civil Aviation Technical Center | No comments yet

An asphalt airfield pavement is degraded by aircraft traffic and by climatic actions during use. As such, aerodrome operators have to plan periodic maintenance actions to extend the service life of their infrastructure. If no remedial action is taken in time, the damage process will accelerate with, as a consequence, the deterioration of the normal operating conditions. Moreover, if the airfield pavement surface is cracked, it will have to be sealed with an elastomeric product to prevent infiltration of water into the pavement, thus avoiding further deterioration and extension of the damage.

To delay vertical crack propagation, several solutions are possible. Among the existing methods to reduce reflective cracking, we are going to focus on the flexible interlayer solutions (polyester geogrid) placed between the levelling layer of the existing pavement and the new asphalt overlay. An asphalt reinforcement polyester geogrid allows aerodrome operators to reduce the frequency of corrective maintenance action while extending pavement life.

Although polyester geogrids are commonly used around the world, the technical input of these products is not formalised, known and mastered. In 2008 a study by the ENTPE (National School of Public Works of the State, France) established state-of-the-art research on the subject in collaboration with the LCPC of Nantes1. To further understand the mechanical behaviour of polyester geogrid in an asphalt pavement structure, a finite element analysis was carried out; and finally by comparing these results with its own feedback from airfields in France, the Civil Aviation Technical Center (STAC) could better understand the benefits of different types of products used to delay reflective cracking.

The problem of pavement cracking and of reflective cracking through the upper layers is complex. It still calls for further innovations in the design of structures, in the performance of materials and the development of improved solutions generally described as anti-cracking techniques2.

Cracking in foundation pavement is mainly due to two reasons:

The first cause occurs under the effect of hydraulic shrinkage, when the tensile stress generated in the material by hydraulic solidification reaches a value close to the ultimate tensile strength.

Fatigue cracks usually appear in the longitudinal direction, at the level of traffic lanes. A fatigue crack is the result of a structural failure of the pavement and precedes the end of life of the pavement. For flexible structures, it is the result of excessive deflection which generates excessive tensile stresses at the bottom of the surface layer. Another type of pavement crack is commonly known as ‘Alligator’ cracking.

According to G. R. Irwin3, in the case of crack’s plane, the possible movements of these surfaces are combinations of three independent modes:

Mode I corresponds to the crack opening and early thermal strain and shrinkage of the foundation layer cause this type of mode. The crack starts at the bottom of the foundation layer and then develops up towards the surface of the pavement. Similarly, when traffic loads pass just on top of a transverse crack, the crack tends to open up. Finally, if an aircraft is travelling astride a longitudinal crack, it causes the opening of the crack and thus a Mode I failure occurs.

Mode II corresponds to the appearance of ‘shear lip’ cracking. When the traffic load is offset from a transverse crack and sits on the edge of the gap, the movement of the lips of the crack corresponds to Mode II. The same thing happens when a vehicle passes along a longitudinal crack.

Mode III corresponds to a deformation of the tear lip cracks.

Thus, the recovery of an existing crack through the surface layer is the result of the movement of the lips of the crack that are transferred to the base of the surface layer. To correctly identify the problem of reflective cracking, it is important to identify the different parameters that can cause these movements and analyse their nature. Although cracking is inevitable, knowledge of the process of degradation is necessary in order to propose solutions that will control and delay reflective cracking.

The polyester geogrid is inserted between the levelling layer (or existing pavement) and the new asphalt overlay. To limit reflective cracking, several actions may be undertaken, including:

Many users and producers agree that the use of a polyester geogrid significantly contributes to the delay of reflective cracking on pavements due to the success of many projects that have previously used this method.

In order to better understand the role of a polyester geogrid in a reflective cracking condition, finite element modelling of a bituminous concrete/polyester geogrid beam, cracked under a static load with CESAR-LCPC software, has been carried out.

The finite element method allows the study of fracture mechanics from a numerical point-of -view, thus providing more accurate solutions to complex problems, like the propagation of cracks in a bituminous concrete layer. The objective of the simulation is to evaluate cracking resistance of a bituminous concrete layer reinforced inside with a polyester geogrid under a static load in a four-point bending (beam loaded at its centre and simply supported at its edges).

The bituminous concrete and polyester geogrid were modelled using a two-dimensional quadrilateral finite element mesh of elastoplastic behaviour. For the simulation of the polyester geogrid bituminous concrete interface (adhesive layer), zero-thickness interface elements were used at three double nodes, with a criteria based on the Mohr-Coulomb friction model (TCNL module used in the CESAR-LCPC finite element computation code).

For reasons of symmetry, only half of the beam was modelled. This beam, partially cracked, is subjected to a static loading (22.5 kN), simulating the action of a moving load.

For this model, the mechanical boundary conditions introduced correspond to:

By symmetry, with respect to the Oy axis, we obtain an overview of stress distributions through the polyester geogrid. It is observed that the geogrid is subjected to very high tensile stress at its base, which results in very high deformations.

A crack path tends to follow Mode I. The polyester geogrid, which seems to oppose the opening of the crack, would be subjected to very large deformations at the crack opening. In this high tensile stress area, the tangential strengh at the bottom of polyester geogrid interface exceeds the friction strength, causing the unsticking of the polyster geogrid, resulting in the physical contact between the two materials being broken.

In order to assess the rate of crack propagation5 below and above the polyester geogrid, the values of different coefficients of constraints KIa, produced at the head of the crack in Mode I, were calculated. This was done first by simulating the propagation of a vertical crack, and then by simulating a horizontal crack in the polyester geogrid interface. The calculations were carried out using the finite element model with modified loading and boundary conditions.

For a decohesion value equal to 1, the variation curve of stress intensity coefficient (KIa) depending on the height of cracking (a) was determined.

With the polyester geogrid (positioned at a height of 30mm), we find that the intensity coefficient diminishes when approaching the interface (values ​​of a>16mm) and just after crossing it. During this step, the crack tends to close with a polyester geogrid. In the absence of polyester geogrid, we have a monotonic evolution of KIa.

The results obtained with this finite element model permit to better understand the behaviour of polyester geogrid facing reflective cracking. It is found partly trapped in the interfacial area of the polyester geogrid and also spreads in the longitudinal direction, thereby reducing the vertical crack propagation.

Also, to better assess the contribution of a polyester geogrid, the model will be extended from two-dimensions to three-dimensions for the study of longitudinal cracks. The model must also be refined by integrating the stresses of thermal origin generated along and in the head of the crack. Indeed, such stresses, depending on temperature differences, favour more the opening of the crack. For a calibration and a validation of this finite element modelling of reflective cracking, it is necessary to proceed to an in-situ observation.

However, when the polyester geogrid is correctly implemented (quality of gluing with bituminous concrete layers, absence of ripples or folds, etc.) first feedback shows that its integration in the layers of the pavement significantly delays the onset of cracks in pavement surface.

Thus, the use of polyester geogrid has provided aerodrome operators with an alternative solution to recurring problems such as the struggle against the occurrence of surface cracks.

Yet little is known about how polyester geogrids behave in the pavement structure, or what kind of effects they could have after several years of airfield pavement service. The lack of reliable reinforcement behaviour models for the design and lack of understanding of the mechanisms involved seem to discourage aerodrome operators to use this method of reinforcement. The computer tool seems well-suited to explain the polyester geogrid behaviour.

Belkacem Laïmouche is Head of the Expertise of Airfield Pavements subdivision at the Civil Aviation Technical Center. The goal of the subdivision is to periodically assess, using auscultation equipment, the state of military and civil airfield pavements, including control of their level friction. 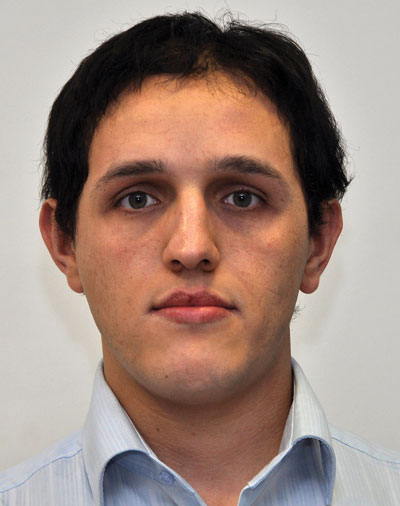