Over the past year Vienna Airport has made substantial progress in terms of infrastructure modernisation, its strategy to save costs and increase productivity and the strengthening of its non-aviation business. 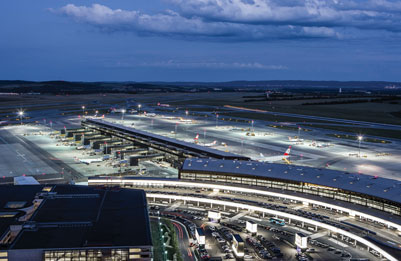 Located at the very heart of Europe, Vienna Airport (VIE) is a strategically important hub in the Eastern Europe region and within Austria’s economic landscape. Several multinational companies operate their Central and Eastern Europe businesses from regional headquarters located in and around Vienna. Meanwhile, for the tourism sector, VIE is the country’s main gateway to the world. The airport is providing support with two strategies – being an efficient hub to Eastern European destinations, and providing good services as a point-to-point destination.

More than 300 company headquarters are based around the airport and the consistent network of routes from VIE to Eastern European countries is vital to these organisations. Meanwhile, with more than 20,000 employees in 230 companies on site, the airport is one of the biggest employers in the eastern part of Austria. In fact, as Chief Financial Officer, Günther Ofner, reveals, each additional one million passengers generates 1,000 new jobs at the airport.

VIE has introduced several initiatives to reduce costs and improve productivity, as well as gaining additional revenues from new sources, such as real estate. “The key objective is to reduce the company’s net debt significantly, so as to improve our standing on the financial market,” explains Günther. “This is necessary regarding future investment projects with a high cost impact, like a third runway. Here we are in a very good position.”

Non-aviation activities, including real estate, parking, retail and food and beverage (F&B), contribute a third of VIE’s total revenue. Parking and retail, in particular, are key drivers. Chief Operating Officer, Julian Jäger, says: “In retail and F&B we are focusing on a strong quality improvement. With the opening of Check-in 3 and the modernisation of the older terminal parts, we are gaining additional attractive space for new shops and restaurants. Numerous shops have opened in the last few months and several more will follow. A big step will be undertaken with the modernisation of Pier West.”

Günther adds: “We are also concentrating very strongly on our real estate business. A hot topic is the expansion of hotel infrastructure on site, where we are focusing on a provider in the mid-price segment. The tender for a new partner is already published and we are looking for partners. Further projects in the fields of conferencing and logistic opportunities are also part of our strategy.” Increasing service quality and enhancing the passenger experience are key near-term targets for VIE. The airport has launched an internal service quality enhancement programme which has generated more than 120 individual projects. Many of these are already finalised, while others are either in progress or being planned, and will be rolled-out in the coming months.

The examples are myriad, and include the installation of a family service counter and several security support counters for passengers at the security lanes, the introduction of new boarding procedures, the expansion of free Wi-Fi and mobile services, and the installation of new information screens in all terminals. Empowering the passenger is at the heart of many of the airport’s initiatives. For example, self-service check-in is already well established at VIE, and the airport will undertake an evaluation period for self-bag drop in 2014.

The design capacity of the old infrastructure was 16 million passengers per year, and the airport was in fact handling 21 million annual passengers. Therefore, the opening of Check-in 3 was an extremely important development for the whole airport system and, in particular, in terms of enhancing the passenger experience. The opening was also heralded as the beginning of an ongoing modernisation process for the airport infrastructure. “We immediately refurbished Terminal 1 and some older gate areas. The modernisation of Terminal 2 is planned for the coming years. In parallel, we are focusing on the modernisation of all retail and F&B areas,” reveals Julian.

Of course, to maintain its role as an efficient hub for Eastern Europe, particularly for Austria’s economy, it is important to convey to the airlines that they can achieve their long-term growth ambitions at VIE. It is from this perspective that the proposed third runway is so important.

“Right now the number of flight movements is decreasing and runway capacity is sufficient,” says Günther. “But the growth is sure to return again – all figures show a steady growth perspective for the global aviation business. And for that reason we will need to provide additional capacity on the ground.”

VIE’s flight schedule in 2013 saw the opening of several new routes, including a new long-haul destination to Chicago by Austrian Airlines; the expansion of routes to Greece by NIKI; a Germania service to Bremen; Alitalia to Milan Linate and Condor to Mombasa. Another very important new destination that will be launched in May 2014 is Manchester, where VIE sees strong market demand.

“We still see clear growth potential in long-haul routes at VIE, where we do not offer very much at present,” explains Julian. “Austrian Airlines started a Chicago service in 2013, which is developing quite well, and will open a further long-haul destination with Newark in 2014. Supporting long-haul is a strategic issue for VIE and we are providing a very attractive incentive model for new connections. Another strategic issue is to strengthen transfer traffic, as this is a solid part of our hub strategy for Eastern Europe.”

Looking ahead to 2014, VIE’s main strategic objectives are to increase productivity, to achieve a further reduction of costs and, on the market side, to achieve a steady improvement in service quality, the enhancement of retail and more long-haul destinations. “We are on track, and especially in terms of cost-cutting and service quality we have really moved forward in the last few months,” says Julian. “An important step will be undertaken in 2014 with the modernisation of Pier West, an old part of the terminal infrastructure, and a lot of new shops and restaurants will be developed in that period of time. Long-haul is a mid-term strategic issue and remains challenging as the aviation business is, globally, in a difficult situation.”

Günther explains that the reduction of costs and further improvement of net debt are key issues for the company in 2014 and beyond. “Therefore, we need to calculate our next investment projects very clearly to keep the cost side on a steady low base,” he says. “At the same time, we are working on the further development of our real estate business. We see much potential, especially in conferencing, the hotel business and logistics. The long-term perspective is to develop our venue into some kind of airport city, where several branches and services would be located.”