Exclusively for International Airport Review, Eric Dautriat, Clean Sky’s Executive Director, outlines the main features of the project, its achievements to date and what is expected from the future.

On 10 July 2013 the European Commission presented its proposal for Clean Sky 2 in the framework of its ambitious €20 billion innovation package. Of that budget, Clean Sky 2, the largest ever aeronautical research programme, amounts up to €4 billion.

As a large part of the European economy is currently in crisis, how do you explain that Clean Sky has seen its budget increased?

Investment in environmentally-friendly technology is an investment in our future. Clean Sky’s mission is to help make that a reality. And despite the economic downturn that trend has not weakened. Global demand in all aviation segments shows resilient growth of more than four per cent per annum with an estimated need for 40,000 new aircraft in the next 20 years.

Environmental-friendliness and competitiveness go hand-in-hand in the long run with regards to CO2 emissions, noise and local air quality. Our sector must not only maintain but also increase its competitiveness to benefit from global growth in civil aviation. Clean Sky’s mission is to develop a substantial share of the cutting-edge technology that will help to achieve the environmental goals of the aeronautics industry. This growth will not only benefit large companies (almost 40 per cent of the winners of our calls for proposals are SMEs), but is essential to the strengthening of the European supply chain.

For those who are not yet familiar with it, what is Clean Sky?

Clean Sky works on six technological platforms, called Integrated Technology Demonstrators (ITD) – large aircraft, regional aircraft, rotorcraft, engines, eco-design and systems – each of which are co-led by two European aviation industry leaders. All of them are achieving concrete results, up to large integrated demonstrators, which are the bulk of the Clean Sky contribution to innovation. The first demonstrators, one large turbofan engine for long-range aircraft, and one Turboshaft for helicopters, are currently being tested. Others, like novel wings, electrical systems and lightweight structures, will follow from now on, up to 2016.

Those demonstrators represent cutting-edge technology developed to help meet the four environmental goals set by the Advisory Council for Aeronautics Research in Europe (ACARE) by 2020. First, a 50 per cent reduction of CO2 emissions through drastic reduction of fuel consumption, second 50 per cent reduction of external noise, third 80 per cent reduction of NOx (nitrogen oxide) emissions and fourth a green plane life cycle including design, manufacturing, maintenance, disposal and recycling. Our website (www.cleansky.eu) keeps track of them. We also welcome any interested enterprises, policy-makers, researchers and others to attend our ‘info days’ and other events to learn about us and become part of our exciting project.

This is a special period for Clean Sky, with the original programme more than half way into completion, and the launching of Clean Sky 2: What do you expect from the future?

In July 2013, the European Commission issued its innovation investment package that paves the way to the continuation of the Clean Sky within the EU Horizon 2020 Framework Programme. Clean Sky 2 involves €4 billion of research activity within a coherent programmatic approach. Both the European Commission and the aeronautics industry have made an effort to raise the bar and provide the means to meet the objectives we are adamant to meet. As a flagship of European aeronautical research, Clean Sky will demonstrate a strong leverage effect.

Clean Sky 2, spanning from 2014 to 2024, focuses on research investments and major demonstration activities. The programme will introduce further integrated demonstrations and simulations of several aircraft systems at the aircraft platform level. Innovations from Clean Sky 2 will underpin advances in the next generation of aircraft by mastering the technologies and the risks in time to meet the next market window to replace the current fleet. Clean Sky 2 will be a core European programme which will be leveraged by further activities funded at national, regional and private levels. This will allow us to fully reach the ambitious environmental targets set by ACARE for 2020, to which the current Clean Sky initiative is already strongly contributing as I mentioned above. Beyond that, Clean Sky 2’s most advanced technologies will also start the journey to the 2050 horizon which constitutes a further step of the ACARE vision.

From your experience, what makes the Clean Sky research programme unique and worth investing?

The wide appetite for a Clean Sky 2 programme throughout industry, SMEs, Research Organisations and Academia, is an evidence for the appropriateness of this instrument for research and innovation. And this is largely based on the success of the programme so far.

There are a number of special features about us: Clean Sky is focused on high technological maturity products, and involves the active participation of the European large aircraft manufacturers, working together. The timescale of the activities must be adapted to the industrial strategies, in order to be ready at the right moment when a new generation of products will enter development. Only a dedicated entity with both public and industrial involvement can manage such a programme, with both the necessary flexibility and a constant concern of keeping the overarching objectives. Today Clean Sky, building on its core of industrial leaders, involves more 500 participants from 24 European countries.

It’s important that we don’t forget that global competitiveness can only be achieved through industrial leadership in Europe and by supporting Europe’s knowledge economy.

We had the opportunity to interact with all those groups by being part of the Paris International Air Show in June 2013. We explained the Clean Sky project and highlighted its major achievements to many who visited our stand or attended the conference programme. We offered visitors the chance to see a wide array of hardware such as an open rotor mock-up and actual blade, a morphing wing flap, the laminar wing demonstrator mock-up, a helicopter diesel engine, as well as performing power electronic model, an ice detector sensor and an air intake; all related to the more electric aircraft concept. Not least, we displayed a selection of ecodesign brand new samples. Those objects represent cutting-edge technology that has been developed to help meet environmental goals by 2020 set by ACARE. They have been tested and evaluated and will be part of the performing aircraft of tomorrow.

Clean Sky 2 is now approaching a critical phase where the draft project will be discussed by the EU Member States and the European Parliament so we can start working early next year. We trust we can soon report the good news.

Eric Dautriat began his career with Snecma in Villaroche, France as a mechanical engineer in charge of Advanced Projects of subsonic aircraft engines. He joined the Centre National d’Etudes Spatiales (CNES) in 1985 and was a French Delegate to the Ariane Programme Board and the Scientific Programmes Committee of the European Space Agency until 1988. Joining the CNES Directorate of Launchers in Evry, Eric held the positions of Deputy Manager of Ariane 4 Programmes, Manager of Advanced Projects and Project Manager of Ariane 5 Solid Rocket Booster, before managing the Ariane 502 qualification launch in Kourou, French Guiana, in 1997. Eric was appointed Director of Launchers in 1997 and held the position of Director of Ariane Development of Arianespace from 1999 to 2003. In 2003, he rejoined Snecma as Quality Vice President and in 2008 was promoted to Quality Vice President of the Safran Group. Since September 2009 Eric has been the Executive Director of the Clean Sky Joint Undertaking. He is also Chevalier de la Légion d’Honneur. 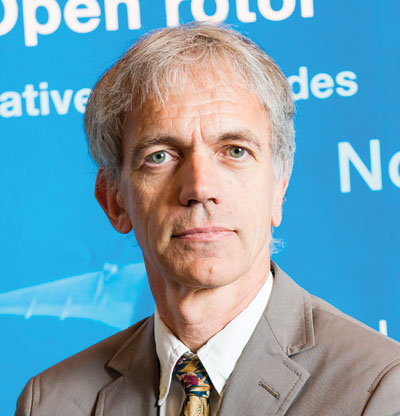