Melbourne Airport speaks to International Airport Review about its new solar farm, which is the size of 26 soccer fields and will have the capability to produce enough renewable energy to power all four of its passenger terminals. 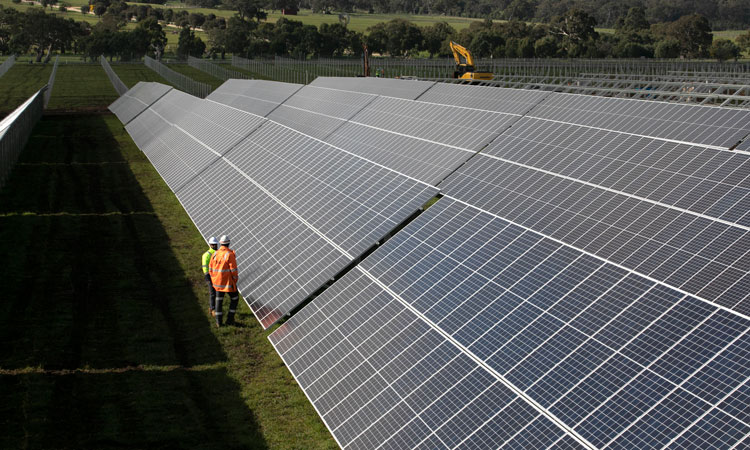 Melbourne Airport has been recognised for its sustainable solar approach after building one of the nation’s largest solar farms.

The solar farm is one of Australia’s largest behind the meter solar installations – and the biggest of any airport in the country. It is approximately the size of 26 soccer fields within a site, which is around 192,000m² in area. With the airport’s electricity demand expected to grow, the construction of the solar farm makes sense for several reasons. The airport is now estimated to generate 17 GW hours of electricity per annum, which is equal to nearly 15 per cent of its annual electricity consumption.

Melbourne Airport’s Chief of Landside Access, Utilities and Facilities Group, Lorie Argus, said: “The size of the solar farm is a large 12MWdc and will have the capability to produce enough renewable energy to power all four passenger terminals, which we expect will deliver significant annualised energy cost-savings. A timely benefit as we move into the recovery stage from the impacts of COVID-19.”

The solar farm project is just one chapter in the airport’s strategy to reduce its carbon footprint. Environmentally, Melbourne is committed to growing the airport in a sustainable way to not only benefit the operation, but also the airport community.

Lorie added: “Having our own solar farm means, environmentally, that we are growing the airport in a sustainable way and are also able to deliver energy cost-savings.”

Having our own solar farm means, environmentally, that we are growing the airport in a sustainable way and are also able to deliver energy cost-savings

The project took just over six months to complete. The panels were installed at the site, off Sunbury Road, which was chosen as the location due to the available land, proximity to the airport and the maximum direct sunlight without obstructions – an optimal condition for producing solar energy. It will be operational in early 2021.

To deliver the project, Melbourne Airport worked with Beon Energy Solutions, leaning on their knowledge and expertise from previous projects. Additionally, the team worked with SMA Australia, who provided the Containerised Inverter Modules and Canadian Solar, who provided the solar panels.
Beon Energy Solutions’ General Manager, Glen Thomson, said that the company is excited to be working with Melbourne Airport to deliver Australia’s largest behind the meter solar installation.

He said: “The airport location brings with it some unique complexities and challenges, which utilises our collective strengths.

“We congratulate Melbourne Airport on their investment and focus on innovative solutions to their growing energy needs, and we look forward to continuing the relationship with similar projects across the airport precinct.”

Additionally, since construction commenced, the airport team have been contacted by Melbourne Markets, Latrobe University and a few other large organisations wanting to find out more about how they can implement similar solar initiatives.

Lorie said: “It’s been great to be able to share our knowledge and first-hand experience so that others can learn from how we have pivoted to solar to support our 24/7 operation.”

As with any project, a number of challenges were taken into consideration before construction commenced. The first challenge was mitigating the effect of reflected glare from solar panels on planes. This can be managed through an aviation impact assessment using the latest software modelling to confirm that there is no impact to pilot safety. Melbourne Airport chose a fixed ground racking system in lieu of a tracking system to assist in managing these risks.

Another challenge related to an ongoing issue around the airport approaches, which is bird roosting. However, all plants have been specifically chosen to minimise any bird roosting risks. For example, shrubs have been chosen to be planted around the perimeter of the solar farm as opposed to those which give off seeds and nutrients that birds in the area look for in order to discourage roosting.

“With our focus firmly on sustainability, we recently installed a solar array on the rooftop of one of our tenant’s warehouses that is located in the airport’s business park. The 2MWdc capacity array, perched on Agility Logistics’ roof, is approximately 30,000m2 and is our first rooftop solar structure. The system will connect into our embedded network to continue our strategy and investment in renewable energy,” added Lorie.

In the long-term, Melbourne Airport will continue with its commitment and investment in renewable energy projects, minimising its carbon footprint and maximising energy efficiency.

The solar farm does not require major airport operational interface, as the system has been designed to have minimal impact on aviation operations. However, the energy produced by the solar array will be used to support aviation operations, as well as other uses throughout the airport.